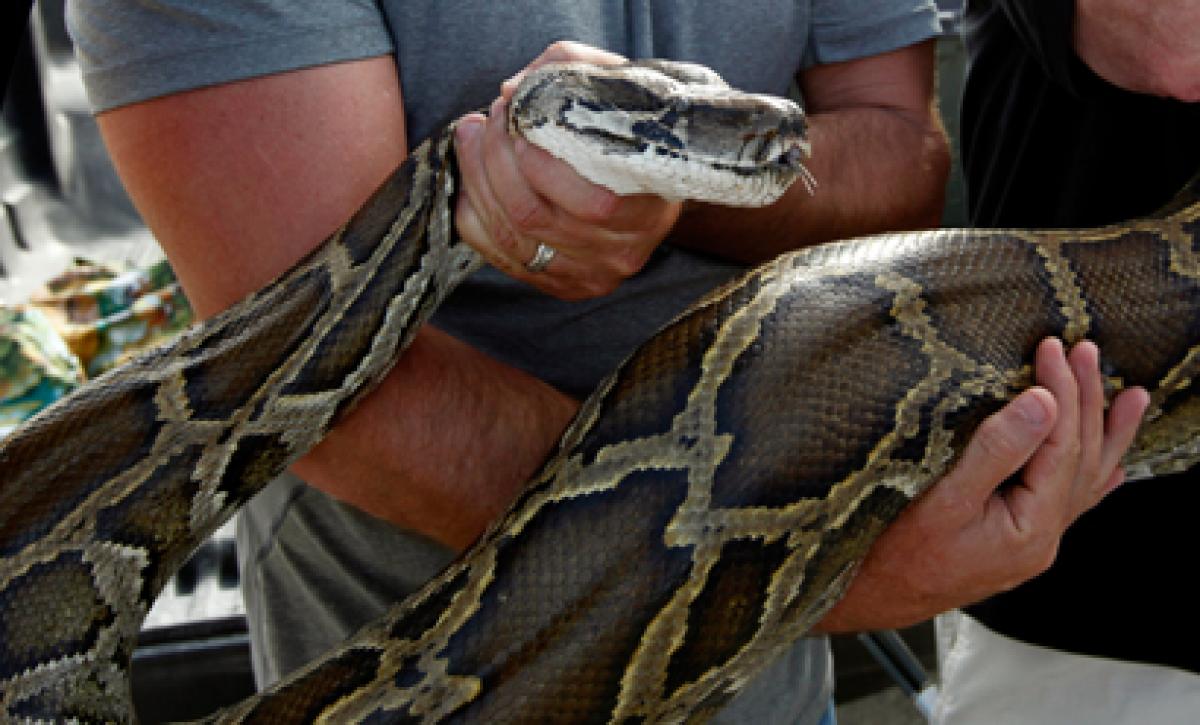 Snake hunters stalked the invasive Burmese python in the Florida Everglades this year, capturing 106 of the predators in the state-sponsored \"Python Challenge,\" including one measuring 15 feet (4.6 meters), officials said on Saturday.

Snake hunters stalked the invasive Burmese python in the Florida Everglades this year, capturing 106 of the predators in the state-sponsored "Python Challenge," including one measuring 15 feet (4.6 meters), officials said on Saturday.

The challenge, which ran from January 16 to February 14, is similar to other hunts of problem species, such as Texas' campaign against feral hogs, which are blamed for agricultural damage, and Michigan's targeting of the invasive Asian carp fish.

It is unclear exactly how many Burmese pythons are slithering around the Florida Everglades, since they are masters of stealth, but they number at least in the thousands, said Florida Fish and Wildlife spokeswoman Carli Segelson.

Still, state officials are hopeful that hunts such as the one they sponsored can keep the snake in check. Florida is aiming to eradicate the species from the wild to protect native mammals, birds and reptiles in the Everglades.

The pythons, which are native to Asia, arrived in Florida as pets, and some of them escaped into the wild and quickly reproduced.

On Saturday, officials honored the Python Challenge's top hunters, at a ceremony in Davie. Bill Booth and his team won the grand prize of $5,000. They removed 33 snakes, including the 15-footer, which weighed in at 125 pounds (56.7 kg), wildlife officials said.

The state has trained participants in how to capture the snakes: Pin their heads to the ground with a hook, grab their bodies and bag them.

"We fought this thing for 20 minutes and I didn't think we were going to get it out of there," Booth, speaking at the ceremony, said of his team's largest snake. "But we had to get it out alive for the challenge and that's what we did."

All the snakes caught in the challenge were eventually killed, but in many areas state rules called for the snakes to be turned in live, Segelson said. The state's preferred method for killing the pythons is to drive a bolt into their brains.

The 106 pythons caught this year far surpasses the haul of 68 from a similar hunt Florida sponsored in 2013, Segelson said. It has not been determined if a Python Challenge will be held next year, but state officials encourage the killing of pythons apart from the competition, she said.