A taste of Burmese food in Myanmar capital 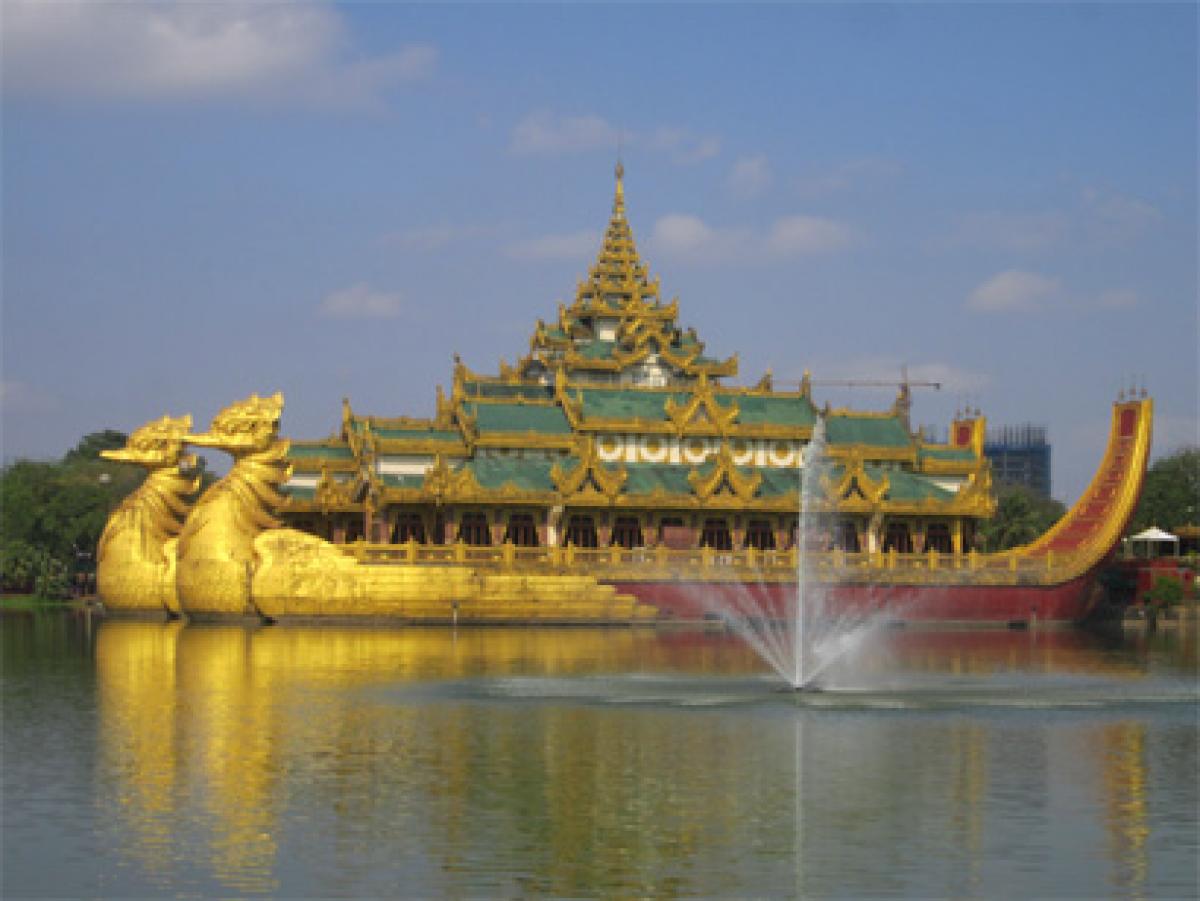 What can be more soothing than seemingly floating on the gentle waters of a lake and sampling a Myanmarese supper and taking part in a cultural show?That\'s what\'s on offer at the Karaweik Palace restaurant, built to look like a royal golden teak barge that seems to be floating on the Kandawgyi Lake in the heart of this former capital of Myanmar, a country once considered a pariah under the rule of

What can be more soothing than seemingly floating on the gentle waters of a lake and sampling a Myanmarese supper and taking part in a cultural show?That's what's on offer at the Karaweik Palace restaurant, built to look like a royal golden teak barge that seems to be floating on the Kandawgyi Lake in the heart of this former capital of Myanmar, a country once considered a pariah under the rule of successive military juntas but which is now coming into its own.

For, just 35,000 kyats ($28/Rs.1,900) you can have snacks, a typical Myanmarese buffet and get a traditional makeup done while enjoying a three-hour-long extravaganza of dance in many forms. Alcohol is extra.

"It's really a great place to come once you are in Yangon. We really had a royal experience," remarked US tourist Emma Megan. Her husband Timothy said they also enjoyed romantic sunset on the horizon over the Kandawgyi Lake, also known as Royal Lake.

He said from a distance it was amazing to see the changing colours of the Karaweik's Pagoda-like rooftop with spires as the sun slowly set.

At night, the barge is lit up and reflects on the calm waters of the lake.

The 400-cover two-storeyed Karaweik Palace, close to the 2,500-year-old Shwedagon Pagoda, which enshrines strands of the Buddha's hair and other holy relics, serves the buffet with a live cultural performance for three hours every evening from 6 p.m. Tickets are on sale from 9 a.m. to 4 p.m.

The entertainment includes puppet show, traditional and acrobatic dances and an elephant (costume) dance mainly depict Myanmarese culture and history. There is also an exhibition of traditional arts, handicrafts and costumes.

The restaurant is also open in the afternoons for lunch and serves Myanmarese and Chinese food sans the cultural programme.

The restaurant's staff is dressed in medieval attire and some like Royal Guards to give you a 'royal' feel.

"It's one of my favourite dining places in Yangon that gives a feel of what the country was centuries ago," Live to Love India chairperson Arjun Pandey told this visiting IANS correspondent.

Live to Love International is a network of non-profit organizations founded by the Gyalwang Drukpa, the spiritual head of Drukpa Buddhists.

"The food is authentic, nice and reasonably priced for the show and buffet dinner. Besides, it offers free treats on the walkway that gives a feeling of relishing street food," Pandy added.

The history of Karaweik Palace dates to 1972 when its construction began. The tourism ministry initially operated it. In 1998, the Zaykabar Company, a major conglomerate with interests in telecom and construction, took it over.

Its design is based on the Pyi Gyi Mon Royal Barge, a boat once used by the Burmese kings to travel.

After seeing an end to five decades of a military junta rule in Myanmar (earlier known as Burma) in 2011 and years of isolation, this South East Asian nation is now opening up to tourists.

The Ministry of Hotels and Tourism says there were more than 4.2 million arrivals at the end of November last year.

A majority of foreign tourists come from China, Thailand, France, Germany and the US.