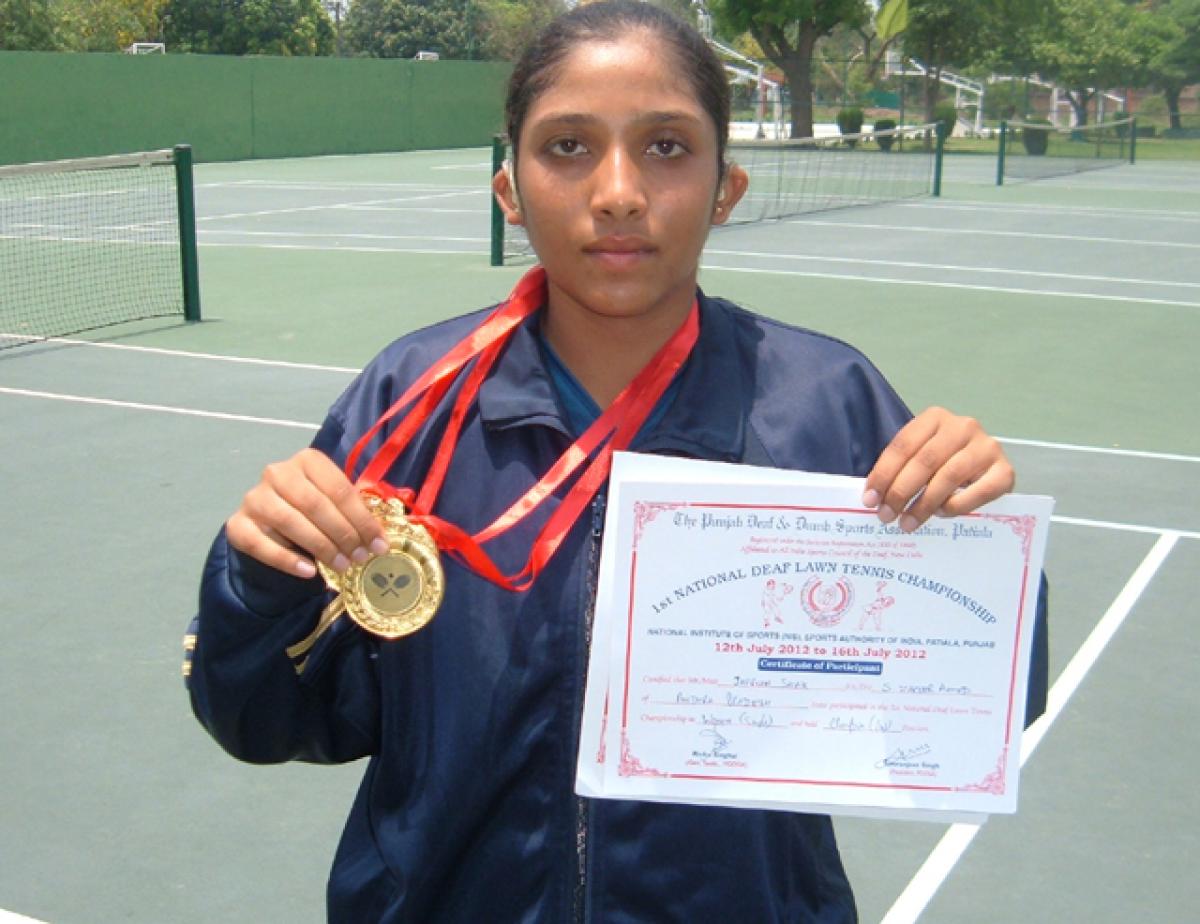 India’s ace tennis star left high & dry. She is the country’s top ranked tennis player in the deaf and dumb category where she has won several international honours, including two silver finishes in the Deaf Youth Tennis Cup at Hamburg.

She is the country’s top ranked tennis player in the deaf and dumb category where she has won several international honours, including two silver finishes in the Deaf Youth Tennis Cup at Hamburg. Today as she prepares to participate in the World Deaf Tennis Championship, slated to be held in Nottingham from July 19 to 26, the gifted Hyderabad-based Kurnool native Shaik Jafreen and her parents are running from pillar to post to raise funds to meet the travel costs, although she will be a member of the Indian team, which also has Punjab girl Parul Gupta and New Delhi’s Nishtha Dudeja. Her father, Shaik Zakeer Ahmed, is desperate to raise the money, which is around Rs 4.75 lakh. “She gets no support. Till date all the expenses incurred towards her engagements have been borne by us, despite the problems that a less than affluent middle class family faces. She has the wherewithal to earn laurels so we don’t feel that the investments will go waste,” points out the father fully proud of her achievements.

A major irony (call it tragedy of the times) is that approaching people in authority has drawn blank, including being summarily told that “Sports Authority of Andhra Pradesh (SAAP) has no provision to extend financial assistance to deaf and dumb sportspersons.” It has been a rather pathetic run-up in that the bureaucrats have reportedly cold-shouldered the directions of the politicos.

The governments, which go out of the way to ‘reward’ rich athletes never bothered to extend even token financial support despite Jafreen coming with honours abroad. “We are thankful to Sania Mirza because she has been generous enough to enroll Jafreen in the ultra-modern Sania Mirza Tennis Academy (SMTA) in the city outskirts. A bigger gesture has been that my daughter gets trained free of cost, which is a huge relief for us,” points out Jafreen, who shifted to Moinabad to be nearer to the Academy and save on travel time.

However the problems notwithstanding, Jafreen, is there at the Academy training as hard as ever so that she can stay focussed on the bigger battles that lie ahead. The family is now hopeful that the K Chandrasekhar Rao government will rise to the occasion, particularly because the Chief Minister has been promoting sports in a big way.

If Jafreen fails to participate in the ensuing tournament, it will shatter her dreams of qualifying for the 8th Asia Pacific Deaf Games Tayuan 2015 in Chinese Taipei from October 3 to 11. One sincerely hopes that the Telangana State government will sanction the required funds to help the girl realise her aspirations. After all, she is a product of an academy that is promoted by the State’s Brand Ambassador.