Remnants of a rich and rugged past 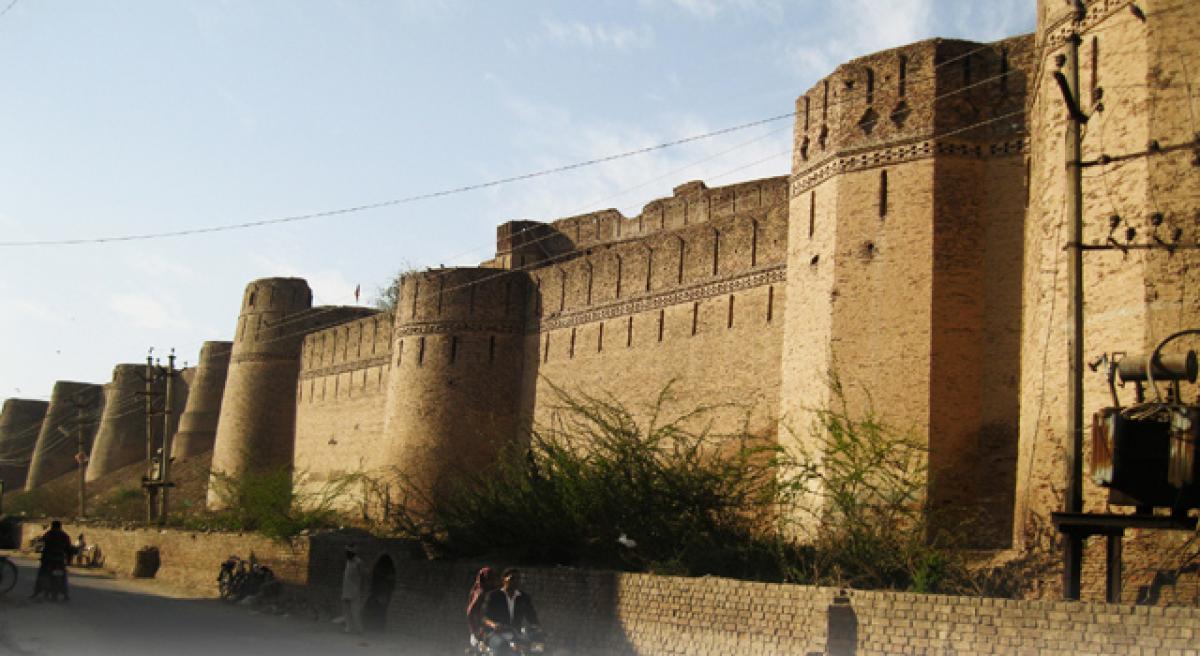 Hanumangarh\" I have to admit that the name attracted me right from the moment I first saw it while passing by the place during a train journey from Haridwar to Bikaner. I was eager to know the reason behind a place being named after the Monkey God and at the first available opportunity landed there. And I must say the place did not disappoint me.

Hanumangarh" I have to admit that the name attracted me right from the moment I first saw it while passing by the place during a train journey from Haridwar to Bikaner. I was eager to know the reason behind a place being named after the Monkey God and at the first available opportunity landed there. And I must say the place did not disappoint me.

Once in Hanumangarh, while walking through the dusty but neat lanes and by lanes, I learnt, from the local people sporting colourful turbans, that the original name of the place was Bhatner (alternatively spelled Bhatnair) as it was founded by and remained in the control of the Rajputs of Bhati clan for a considerable period of time.

Then in 1391 the fort of Bhatner was wrested by Timur by defeating Bhati King Rao Doolchand. This even finds mention in ‘Tuzuk-e-Timuri’ (autobiography of Timur), where Timur himself has clearly stated that this fort being one of the strongest and most secured forts of India at that time. Even Mughal Emperor Akbar speaks of the impregnability of the fort in his book ‘Ain-I-Akbari’.

The Bhatti Rajputs continued to hold sway over Bhatner till 1805 when it was taken away from them by Emperor Soorat Singh of Bikaner. And since the day of victory was Tuesday (the auspicious day of Hindu God Hanuman), the name of the place was changed to Hanumangarh.

The fortress, however, is still called the Bhatner Kila and proudly stands in the middle of the town of Hanumangarh, which has sprung up around it. The fort is about 1700 years old, making it one of the oldest forts of India.

It is completely built by bricks and covers 52 bighas of land. Its shape is that of a large parallelogram having 12 projected circular bastions on each side, a feature of Mughal fortification. The Bhatner Fort fell in the path of invasion of India from Central Asia and had always acted as a strong barricade against attacks of the enemies.

It had been famous for its invincibility as only very few could gain control over this fort. Rulers like Timur, Ghaznavis, Prithviraj Chauhan, Akbar, Qutub-uddin-Aybak and Rathores had captured this fort but that too not very easily. The Bhatner Fort rests on somewhat elevated land with gigantic barricades.

It has many towering gates surrounding the fort and many big rounded bastions that stand at intervals. The entire foundation includes 52 kundu sir ponds that were used to store rainwater that would suffice a huge battalion for a year. Inside the fort, there are many temples dedicated to Lord Shiva and Lord Hanuman.

There are three statues, which bear inscriptions, and an ancient building called “Jain Pasara” is situated inside the fort. The area around Hanumangarh is quite ancient and holds a significant place in history. A number of terracotta decorative tiles dating back to the late Kushan Empire along with a number of coins have been unearthed here from a number of archaeological ruins.

The remains found at Kalibangan (near Hanumangarh) in 1951 reveal that this area was once part of the nearly 5000 years old Indus Valley Civilisation. The remains of the human skeletons, unknown scripts, stamps, coins, utensils, jewellery, toys, statues, wells, bathrooms, fort, streets, markets, etc, found during excavation tell the story of the well-developed lifestyle of our ancestors. The remains found at these places have been kept at Museum in Kalibangan and at National Museum, New Delhi.

Wedged between Jaipur and Bikaner, Hanumangarh is easily accessible but still enough off the beaten track to really experience life away from the big smoke. The town seems to be one of those typical smaller towns of Northern India, which has seen much of its native population migrate for better opportunities.

The fort here is not on the so-called popular touristy route and locals here are oblivious of their inherent heritage. Any attempt at asking for directions to any good sightseeing places is met with a stare.

If you are travelling in the region, it is highly recommended to spend a day (and if not, at least a few hours) here, for the place portrays the culture and rich heritage of this region, which is worth at least one visit. One tradition that has been ongoing for generations here is the morning meeting between the local camel herders.

These delightful groups of men sit down to chill over some opium each morning before they head out to tend to their herd. It is an age-old tradition and one they are happy to share with outsiders. What I loved most about this experience was watching the camaraderie between the men.

Whilst they each did such an isolated job, the sense of community amongst them was apparent. At Hanumangarh, one of the simplest joys for me as a traveller was being able to take photos of children in their natural surroundings and watch their eyes grow big with excitement when they saw their own pictures in my digital camera.

Location: Hanumangarh is 419 km northwest of Jaipur along the old Multan-Delhi route and 230 km north-east of Bikaner. There are direct train connections to Jaipur, Kota and Delhi
Accommodation: Accommodation options are not in surplus but sufficient enough to accommodate all pockets
Sightseeing: Other than the Bhatner fort, the Temple of Mata Bhadrakali, and the Kalibangan Archaeological Museum containing artifacts dating back to the Indus Valley period can be visited.
Best time to visit: Winter and the monsoons. The summers can be really scorching are to be avoided at all costs.