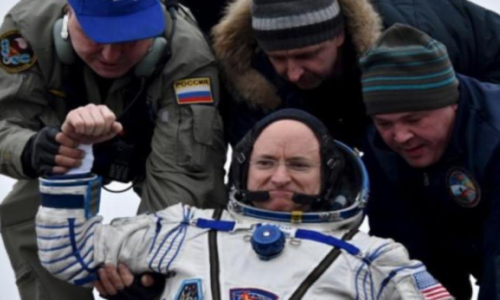 Back to earth. After a 370 km stay above the earth US astronaut Scott Kelly and Russian Mikhaïl Kornienko landed back to earth early on Wednesday...

Back to earth. After a 370 km stay above the earth US astronaut Scott Kelly and Russian Mikhaïl Kornienko landed back to earth early on Wednesday March 2nd in the steppes of Kazakhstan.

A few hours before that they were leaving International Space Station ISS, setting thus a new record stay of 340 days spent aboard orbital outpost which aims at preparing for a future manned mission to Mars.

His most recent stint was aboard the International Space Station, where he's lived since March 27. In all, the astronaut has now spent a total of 520 days in orbit across four missions.

“Physically, I feel pretty good,” Kelly said at a news conference days before his return. “The hardest part is being isolated in a physical sense from people on the ground that are important to you.”

But the long stay has also been lonely. "The hardest part is being isolated from people on the ground who are important to you," he said.
Those aren’t idle words. Kelly is helping NASA develop protocols and techniques the agency will use for a crewed mission to Mars. His twin brother, Mark, a retired astronaut, remained on the ground while Scott circled the Earth.

Researchers' take on left-brain might not be right, study