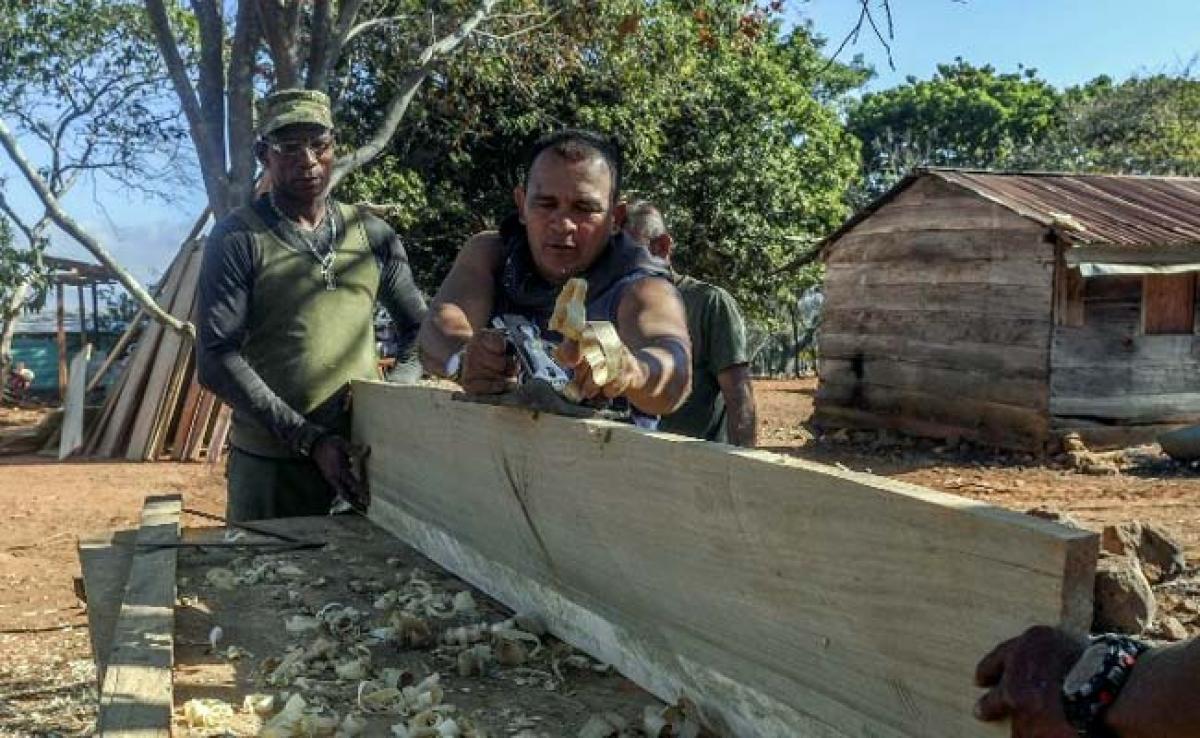 For 17 years in the hot green jungles of Colombia, a gun has been Emiro Suarez\'s constant companion. It has made him feel safe. Now, like thousands of other FARC rebel fighters, he must learn to live without the reassuring feel of it in his hand.

For 17 years in the hot green jungles of Colombia, a gun has been Emiro Suarez's constant companion. It has made him feel safe. Now, like thousands of other FARC rebel fighters, he must learn to live without the reassuring feel of it in his hand.

After more than half a century of war, the Revolutionary Armed Forces of Colombia have come out of their jungle hideouts for the next step of their historic peace accord: disarmament.

"A weapon is a guarantee of a warrior's life. It is like life insurance," says Suarez, a 40-year-old man in an Arsenal football shirt and black combat trousers.

"After carrying it for so many years, laying it down makes you feel a bit insecure."

Nevertheless, Suarez has brought his nearly new AK-47 to a demobilisation zone in the sweltering heat of northern Colombia. Here, as in 25 other zones, the FARC is preparing the first phase of disarmament: an inventory of all its weapons by UN monitors before they are handed over.

No longer a warrior, Suarez says he is up for "any profession, as long as it is productive. I would like to teach agriculture."

The FARC meanwhile is to transform into a political party. Under the controversial peace deal, some of its leaders will exchange their jungle dens for seats in the legislature.

"In this peace process, we are counting on a different weapon: words. We are creating another force - a political force," Suarez says.

Born in an uprising for land rights in the 1960s, the FARC recruited generations of fighters from poor rural areas. Gladys Narbais, of the kankuama indigenous group, has spent 26 years - more than half her life - in the force.

"I carry an AK-47. But I have used all kinds of rifles and things," she says.

She got her kidney pierced by shrapnel and spent two weeks laid up after they pulled it out of her.

She gave birth to a son in a camp and gave him to a foster family when he was a toddler. The child's father was killed in combat.

Now 44, Narbais is ready to lay down her rifle for a new adventure.

"After so many years carrying it, I feel ready. I am not afraid," she says, smiling in her blue t-shirt, combat trousers and rubber boots.

"The fight we fought with weapons we will now fight without them. Rifles are not the future."

Commitment to the world

Local FARC commander Solis Almeyda, 57, has been in the force for 40 years. "Disarming is essential for turning into a political movement," he says.

After the accord was passed through congress in December, the process is behind schedule. "The disarmament zones are not fully ready, not to mention the containers" for storing the decommissioned arms, Almeyda says.

As he speaks, work continues on the camp where his troops will live during the coming months of disarmament.

Trucks churn up clouds of dust as they deliver bags of cement. Workers are busy building a kitchen, mess hall, bathrooms and laundry.

"All our lives we have had our weapons with us. Laying them down means a lot for us," Almeyda says.

"You might say it feels nostalgic. But we understand that the FARC has a responsibility to keep our word to lay down our arms. That is a commitment we made to the people, and to the world."