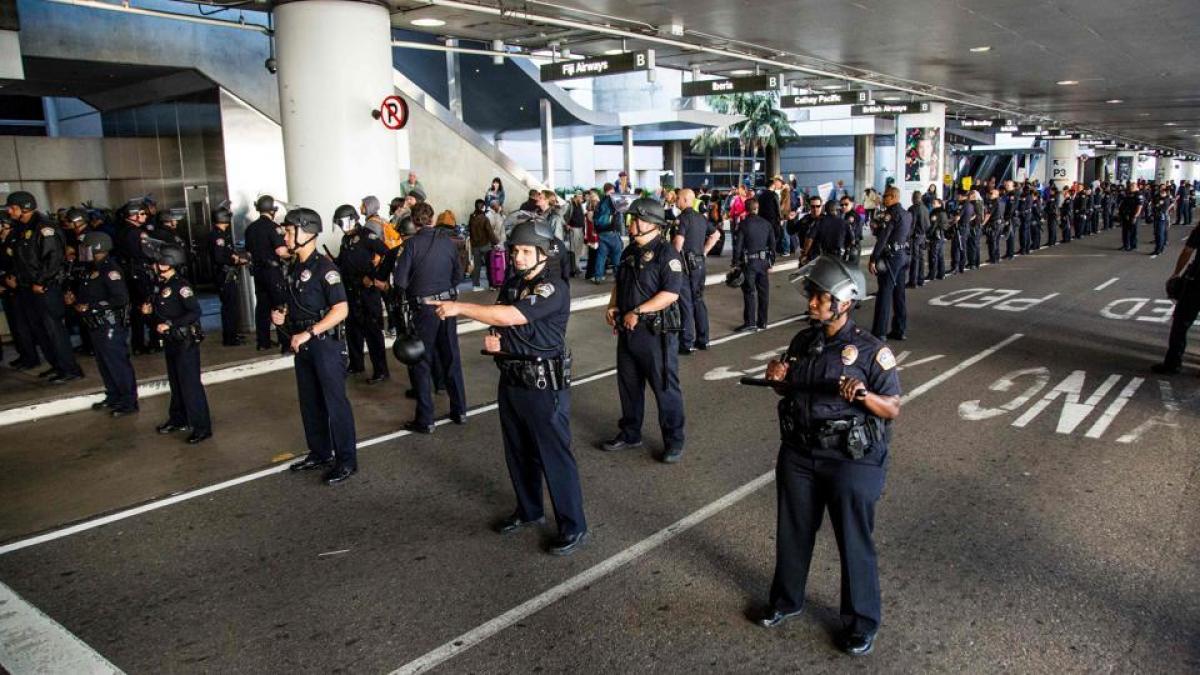 U.S. agents detained an Afghan family of five with valid entry visas at Los Angeles International Airport and have been holding them for several days in California, according to legal papers filed in federal court by human rights lawyers.

U.S. agents detained an Afghan family of five with valid entry visas at Los Angeles International Airport and have been holding them for several days in California, according to legal papers filed in federal court by human rights lawyers.

The couple and their three small children were granted Special Immigrant Visas in return for work the father performed for the U.S. government in Afghanistan that put the family's lives at risk, the International Refugee Assistance Project said in its court filing seeking their release.

However, U.S. Customs and Border Protection (CBP) agents detained the family shortly after their arrival at the airport on Tuesday and has held them in isolation, without access to legal counsel, according to the petition.

The petition, filed in U.S. District Court in Santa Ana, California, south of Los Angeles, says the family was taken into custody "with absolutely no justification whatsoever," a violation of due process rights under the U.S. Constitution.

"Despite repeated requests, the CBP has provided no information regarding why the family was detained, whether they have been questioned, and whether any reason at all exists to justify their continued detention," the petition states.

CBP declined to comment on the matter, which is set for a hearing on Monday before a federal court in Santa Ana that barred a move by the government to separate the family by sending the children and their mother, who cannot speak or read English, to Texas.

Immigrant advocates are increasingly concerned about tougher scrutiny of U.S. residents and visitors from abroad, even those with the proper documentation, under moves by President Donald Trump to tighten immigration policies on grounds of national security.

The petition did not state the exact nature of the father's employment with the U.S. government in Afghanistan.

PROOF OF SERVICE AND SCREENING

But it said he qualified for a special visa under a program requiring proof of having worked for the U.S. Armed Forces or American diplomatic for at least 12 months, "as well as proof of completion of a background check and screening."

"It is extremely unusual if not entirely unique” for someone with this type of visa to be detained upon arrival. The visas require extreme vetting to get," said Talia Inlender, a lawyer with the legal aid group Public Counsel who is part of the family's defense team.

The mother was being detained in downtown Los Angeles with her children - who are 7 years, 6 years and 8 months of age - while the father was in a maximum-security detention facility in Orange County, California, Inlender told Reuters.

The government had intended to transfer the mother and children to Texas, but the family's lawyers persuaded a U.S. district court judge on Saturday night to intervene and stop the move.

The "petitioners have established at least a serious question going to the merits of their claims," Judge Josephine Staton ruled.

When asked to comment about the judge's order, Carl Rusnok, a spokesman for U.S. Immigration and Customs Enforcement, said in an email: “ICE will fully comply with the March 4 judicial order and all other legal requirements.”

Trump issued a directive in January banning entry into the United States of citizens from seven predominantly Muslim countries and suspending admission of all refugees for 120 days.

The Jan. 27 order caused chaos at airports around the world in the following days as visa holders heading to the United States were pulled off planes or turned around on arrival at U.S. airports.

Afghanistan was not one of the countries whose citizens were explicitly excluded in the order, which a federal court has since barred from enforcement. The Trump administration has said it plans to issue a modified order that would pass court muster.