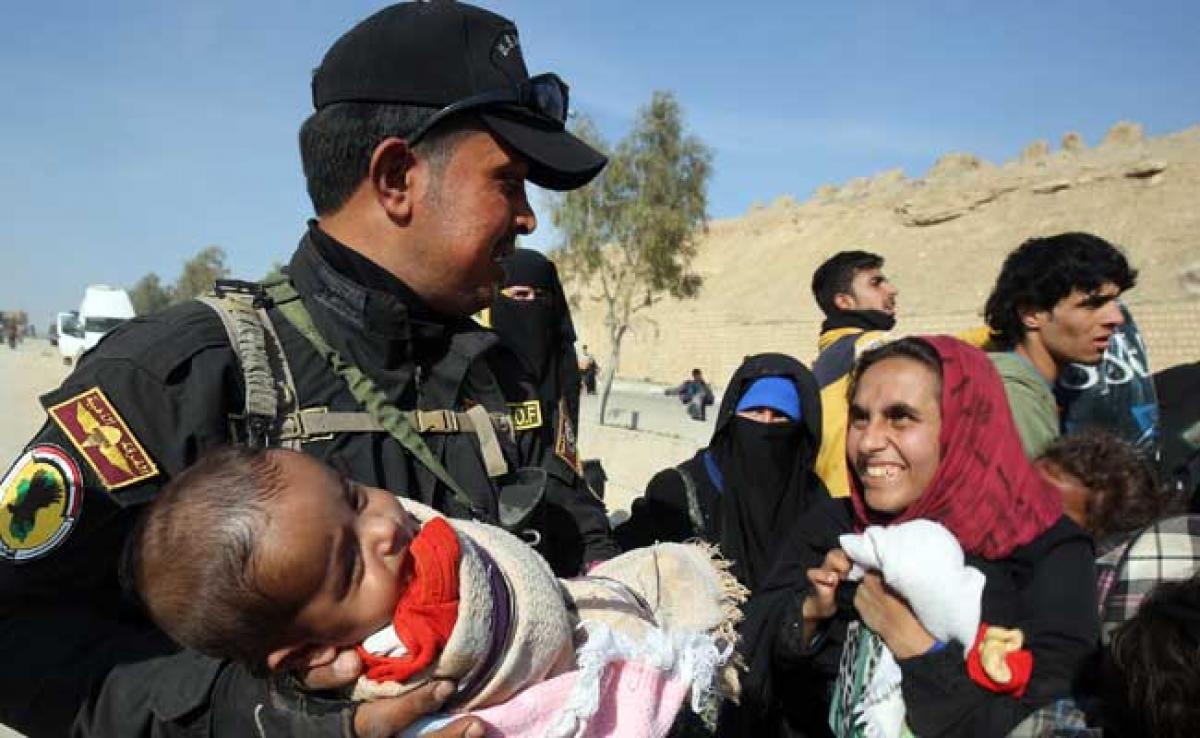 Civilians rush down a hillside on the outskirts of Mosul Iraqi forces waiting, tired but happy after finally being able to flee the clutches of ISIS.

Civilians rush down a hillside on the outskirts of Mosul Iraqi forces waiting, tired but happy after finally being able to flee the clutches of ISIS.

Civilians are being forced from their homes, they say, and rounded up by the retreating terrorists.

"We were used as human shields," says Abdulrazzaq Ahmed, a 25-year-old civil servant, who managed to escape along with hundreds of other civilians fleeing the recently recaptured neighbourhood of Al-Mansur.

The residents descend the hill to buses and police trucks that will take them to camps in the desert near Mosul, joining tens of thousands of others who have fled Iraq's second city.

Families carry their meagre belongings in plastic bags. Women in niqabs - the face veil imposed on them by the terrorists - walk alongside men with shaggy beards and elderly people carried on carts or pushed in wheelchairs.

In the middle of the crowd a young man, a dirty bandage wrapped around his forehead, suddenly collapses. "He was wounded by a shell," his mother shouts. "Give him bread," she begs an officer. "We lived through some terrible times."

The wounded man is placed in a waiting van. A young boy holding a black sheep at the end of a rope also hopes to get on board.

'We were so hungry'

"Where are we going to put this one?" a joking police officer asks, before allowing the boy and his sheep on board, followed by a young girl, her face smudged with dirt, carrying a doll.

Iraqi forces launched the offensive to retake Mosul in October and after recapturing its eastern side set their sights on its smaller but more densely populated west last month.

During the fighting in west Mosul -- which has forced more than 50,000 people to flee their homes - the terrorists have lost control of several neighbourhoods and key buildings.

A young man, 22-year-old Mohammed, says conditions in the city were dire. "There was nothing left to eat or drink," says Mohammed, who gave up his studies when IS took control of Mosul in 2014, but now hopes to return to university.

Ahmed, in his 40s, says he was held for four months in a school in Al-Mansur after being detained by ISIS fighters along with his wife and nine children. "Life was very difficult, we were so hungry, all we had to eat was bread and tahini," he says.

At his side his oldest daughter and his wife, who is carrying their 18-month-old girl, have lifted their veils to show their smiling faces.