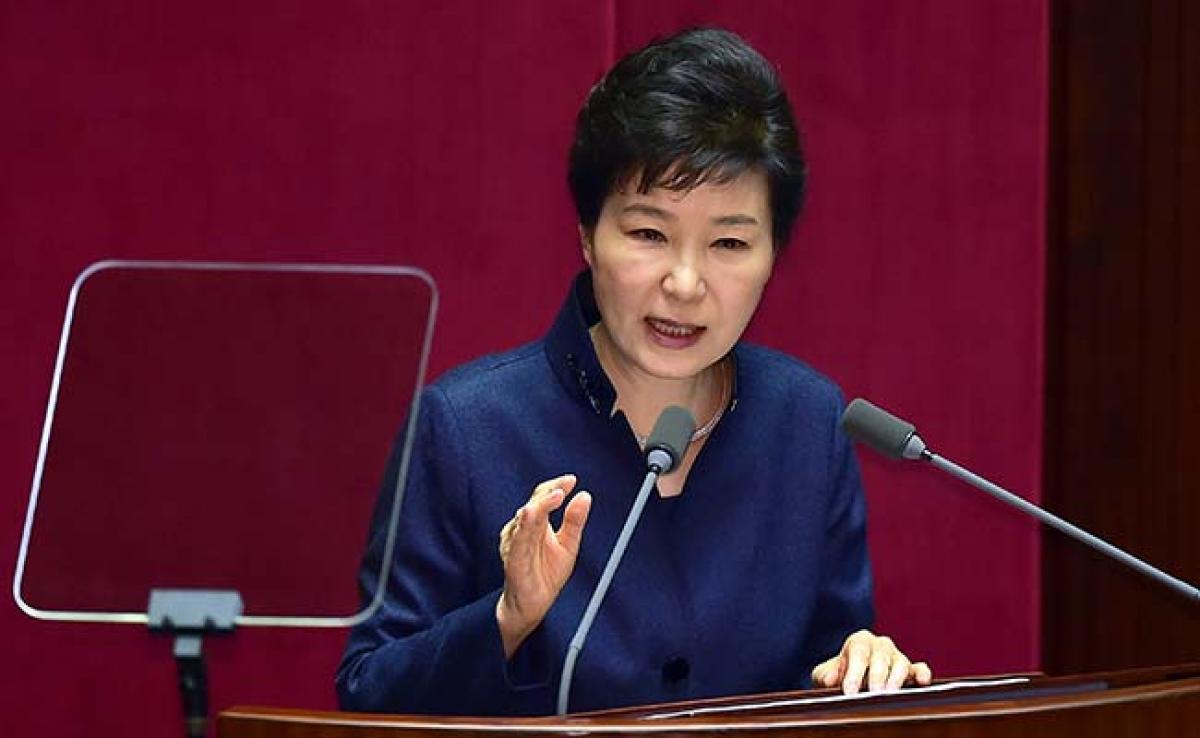 Disgraced South Korean leader Park Geun-Hye left the presidential Blue House on Sunday, two days after a court dismissed her over a corruption scandal, facing life as a private citizen and the possibility of jail.

Disgraced South Korean leader Park Geun-Hye left the presidential Blue House on Sunday, two days after a court dismissed her over a corruption scandal, facing life as a private citizen and the possibility of jail.

Park struck a defiant tone upon arriving at her private home in the Gangnam district of the capital, Seoul, after leaving the Blue House compound in a motorcade of fast-driving black cars, flanked by police motorbikes.

'I feel sorry that I could not finish the mandate given to me as president,' a spokesman for Park, member of parliament Min Kyung-wook, quoted her as saying.

'It will take time, but I believe the truth will be revealed,' Park said in her first public comments since her dismissal.

She accepted responsibility for the events that culminated in the Constitutional Court on Friday upholding a parliamentary impeachment vote over an influence-peddling scandal that has shaken the political and business elite.

'I take responsibility for the outcome of all this,' Min quoted her as saying.

Park, 65, is South Korea's first democratically elected leader to be forced from office.

A snap presidential election will be held by May 9.

Her dismissal followed months of political paralysis and turmoil over the scandal that also landed the head of the Samsung conglomerate in jail and facing trial.

The crisis has coincided with rising tension with North Korea and anger from China over the deployment in South Korea of a US missile-defence system.

Throngs of flag-waving supporters crowded the street outside Park's home as she arrived there about 30 minutes after leaving the presidential palace.

She waved through her car's tinted window as it inched its way down the street, with security men in suits walking alongside.

She stepped out smiling, the public's first glimpse of her since her dismissal, and greeted supporters.

It was not the first time she has had to leave the Blue House compound of traditional-style buildings at the foot of a hill in Seoul.

In 1979, after a nine-day funeral following the assassination of her father, the young Park left the Blue House with her siblings for a family home. She had been acting first lady after her mother was shot and killed in an earlier failed assassination attempt on her father.

Now, having lost presidential immunity, she could face criminal charges over bribery, extortion and abuse of power in connection with allegations of conspiring with her friend, Choi Soon-Sil.

The liberal politician likely to become the next president, Moon Jae-in, promised to work for justice and common sense.

"We still have a long way to go. We have to make this a country of justice, of common sense through regime change," Moon, who advocates reconciliation with North Korea, told a news conference.

Moon is leading in opinion polls, which show South Koreans are likely to throw out the conservatives after nearly a decade in power and turn to a liberal leader.

Moon called on Park to publicly accept the court ruling.

Thousands of Park's jubilant opponents celebrated in Seoul on Saturday, where they have been gathering every weekend for months, and demanded that she be arrested.

The former president's conservative supporters also took to the streets not far away, though fewer in number.

Police were out in force but there was no trouble.

On Friday, two Park supporters were killed as they tried to break through police lines outside the court, shortly after the verdict.