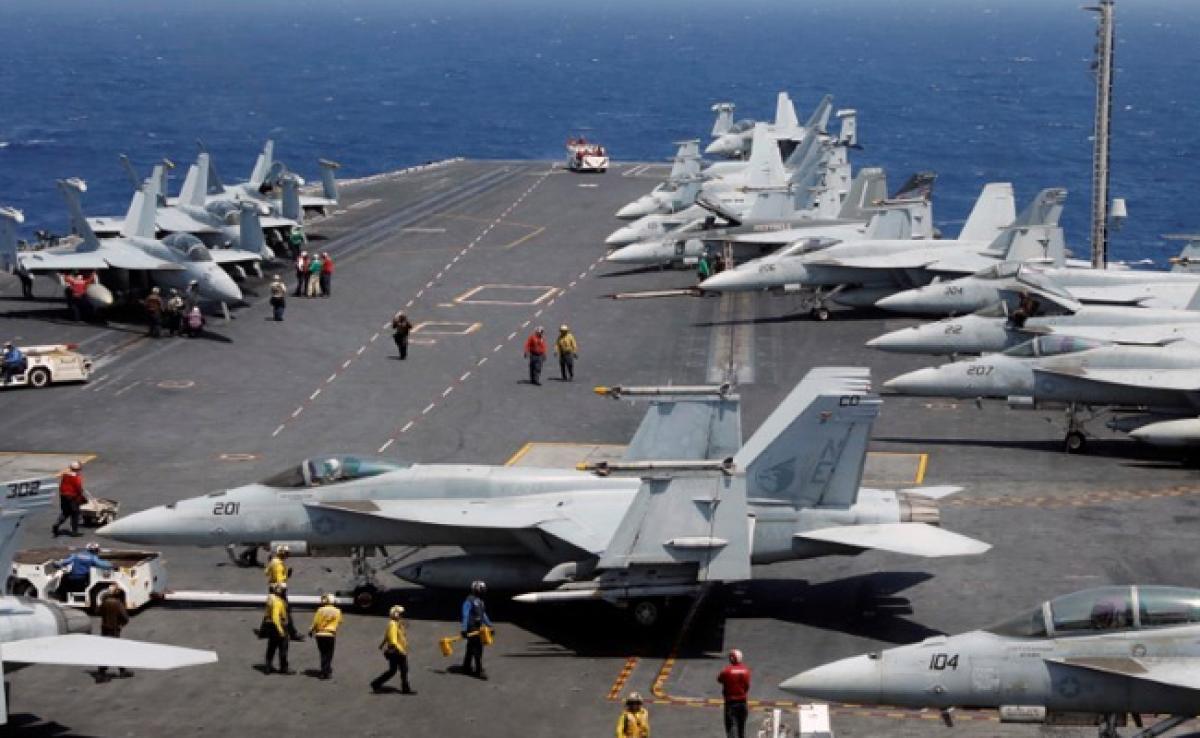 As the USS Carl Vinson ploughed through seas off South Korea on Tuesday, rival North Korea warned the United States of \"merciless\" attacks if the carrier infringes on its sovereignty or dignity during US-South Korean drills.

As the USS Carl Vinson ploughed through seas off South Korea on Tuesday, rival North Korea warned the United States of "merciless" attacks if the carrier infringes on its sovereignty or dignity during US-South Korean drills.

F-18 fighter jets took off from the flight deck of the nuclear-powered carrier in a dramatic display of US firepower amid rising tension with the North, which has alarmed its neighbours with two nuclear tests and a series of missile launches since last year.

"While this is a routine deployment for the Carl Vinson strike group, really the centrepiece for us ... is this exercise we're doing with the ROK navy called 'Foal Eagle'," Rear Admiral James W. Kilby, commander of the Carrier Strike Group 1, told reporters, referring to South Korea as the Republic of Korea.

North Korea said the arrival of the US strike group in the seas off the east of the Korean peninsula was part of a "reckless scheme" to attack it.

"If they infringe on the DPRK's sovereignty and dignity even a bit, its army will launch merciless ultra-precision strikes from ground, air, sea and underwater," the North's state news agency KCNA said.

"On March 11 alone, many enemy carrier-based aircraft flew along a course near territorial air and waters of the DPRK to stage drills of dropping bombs and making surprise attacks on the ground targets of its army," KCNA said.

Last week, North Korea fired four ballistic missiles into the sea off Japan in response to annual US-South Korea military drills, which the North sees as preparation for war.

The murder in Malaysia last month of North Korean leader Kim Jong Un's estranged half-brother has added to a sense of urgency to efforts to handle North Korea.

US Secretary of State Rex Tillerson is due to make his first visit to South Korea on Friday.

Last week, the US ambassador to the United Nations said President Donald Trump's administration was re-evaluating its North Korea strategy and "all options are on the table".

Compounding regional tension, China is vehemently opposed to the deployment in South Korea of an advanced US anti-missile system.

The United States and South Korea say the Terminal High Altitude Area Defense anti-missile system is for defence against North Korea, but China fears its powerful radar can probe deep into its territory and compromise its security.

The United States began to deploy the system a week ago, a day after North Korea launched its latest four missile tests.

South Korean and US troops began the large-scale joint drills, which are billed as defensive in nature, on March 1.

The exercise last year involved about 17,000 American troops and more than 300,000 South Koreans. South Korea has said this year's exercise would be of a similar scale.

The United States has also started to deploy "Gray Eagle" attack drones to South Korea, a US military spokesman said on Monday.

China says the exercises do nothing to ease tension.

Last week, it called on North Korea to stop its weapons tests and for South Korea and the United States to stop their drills.

"We hope the relevant side can respect the security concerns of countries in the region, can take a responsible attitude and do more to benefit the easing of tension, rather than irritating each other," Chinese foreign ministry spokeswoman Hua Chunying told a daily news briefing, referring to the United States.