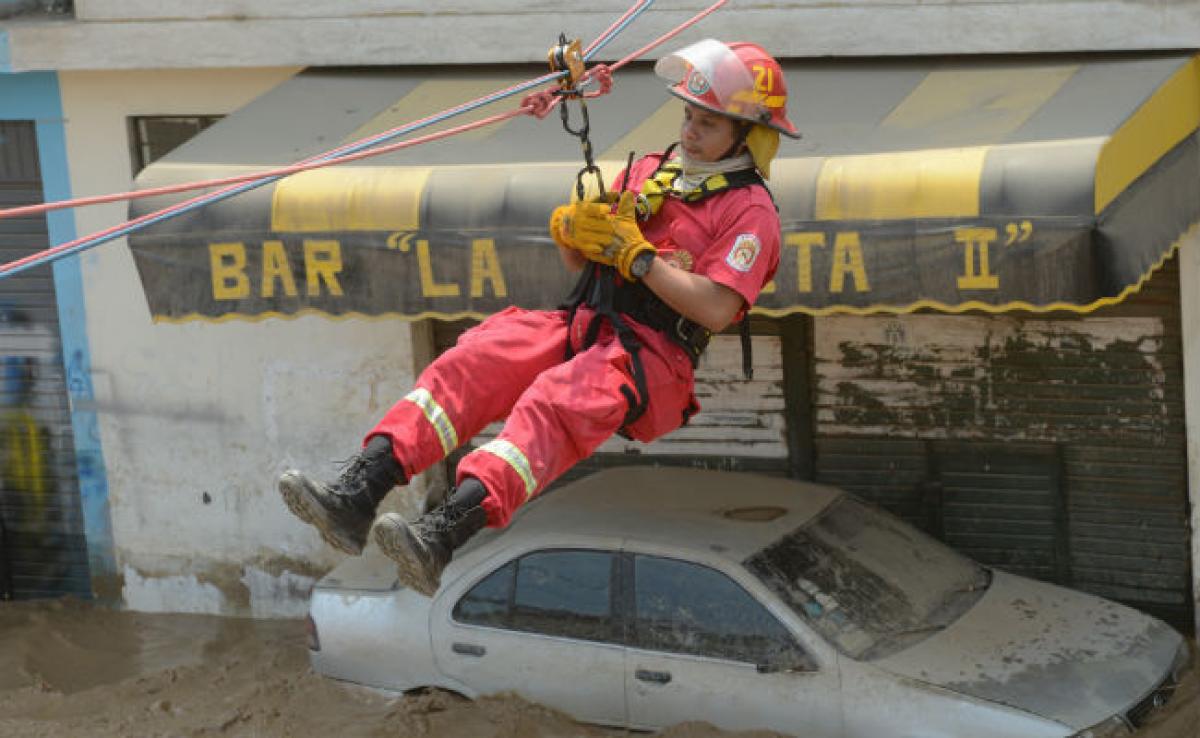 Flash floods and landslides hit parts of Lima, leaving some communities cut off from roads Saturday, as others in Peru fled rising rivers, and...

Flash floods and landslides hit parts of Lima, leaving some communities cut off from roads Saturday, as others in Peru fled rising rivers, and millions fretted that they won't have drinking water.

The government announced Saturday that so far this year 72 people have died as a result of heavy rains and flash floods around the country.

The South American nation of over 30 million has plenty of extremes: its Pacific coastal deserts in the west are interrupted by the soaring Andes, famed for the Inca people and Machu Picchu in the south. Further east, Peru has hot Amazon basin lowlands.

The tremendously steep mountains combine with many rocky and sandy areas that lack the topsoil found in more temperate places, meaning fewer trees are there to stop mudslides.

After weeks of heavy rain swept toward the coast late this week, many riverbeds in coastal areas went from empty to overflowing in no time.

In Lima, some residents on the outskirts of the capital of 10 million awoke Friday to realize their bedrooms were filling with water.

On Thursday and Friday, 10 people died in a landslide in the northern town of Otuzco. Seven of them were in trucks crushed by the huge flow of earth.

Others found themselves cut off by mudslides that blocked portions of the main highway linking Lima to the center of the country.

In one dramatic scene, rescuers used zip lines to help residents of Lima's Huachipa neighborhood escape over the torrent of brown water that was once their street, as it swallowed up cars and trucks.

The floods have been triggered by the weather event known as El Nino, a warming of surface temperatures in the Pacific Ocean that wreaks havoc on weather patterns every few years.

But this year it has hit Peru particularly hard.

"It's a difficult situation, there's no doubt about it. But we have the resources" to deal with it, said President Pedro Pablo Kuczynski.

The government announced it would release 2.5 billion soles ($760 million) in emergency funds to rebuild affected areas.

Over half a million people were getting assistance.

While Peruvians have been dealing with huaycos for centuries, many poor residents of cities and towns build makeshift homes in areas that they may not realize could be flash-flood zones.

At times, authorities tell different groups to move, but they voice frustration that they have nowhere to go. And authorities' presence in the poorest peripheral districts, many perched on mountainsides, can be inconsistent.

The inundation came as the National Emergency Operations Center said at least 72 people have been killed in Peru this year in natural disasters. A total of 72,115 have lost their homes.

Some opposition politicians have called for the president to declare a national state of emergency, instead of local ones.

Among them were a few lawmakers urging Kuczynski to drop a bid for Lima to host the 2019 Pan-American Games so that more funds could be used for recovery efforts.

In metro Lima -- areas such as Huachipa as well as Carapongo -- locals had to form human chains to avoid being swept away to their death.

Police and firefighters also used zip lines to evacuate people from the roofs of their homes.

Frank Luis Limache, a resident of Huachipa, told El Comercio he was trapped with a group of more than 30 people.

"Please. Help us. We are trapped in here and haven't eaten since last night," he said.

In the Punta Hermosa district south of Lima, a getaway of posh beach flats, the usual upscale quiet was jarred by a huayco that on Wednesday swept a farm woman, 32, far from her farm, leaving her standing awkwardly near the beach with her bloodied cow. Caked in mud, her distraught image has become one of the local symbols of this flash-flood season.

Meanwhile, city authorities slapped tight restrictions on drinking water use due to worries over the cloudiness of local river water.

Those who could afford it, pounced on supermarkets and neighborhood shops to buy drinking water, causing shortages in many areas. In less-well-off areas, people lined up to fill buckets from tanker trucks.