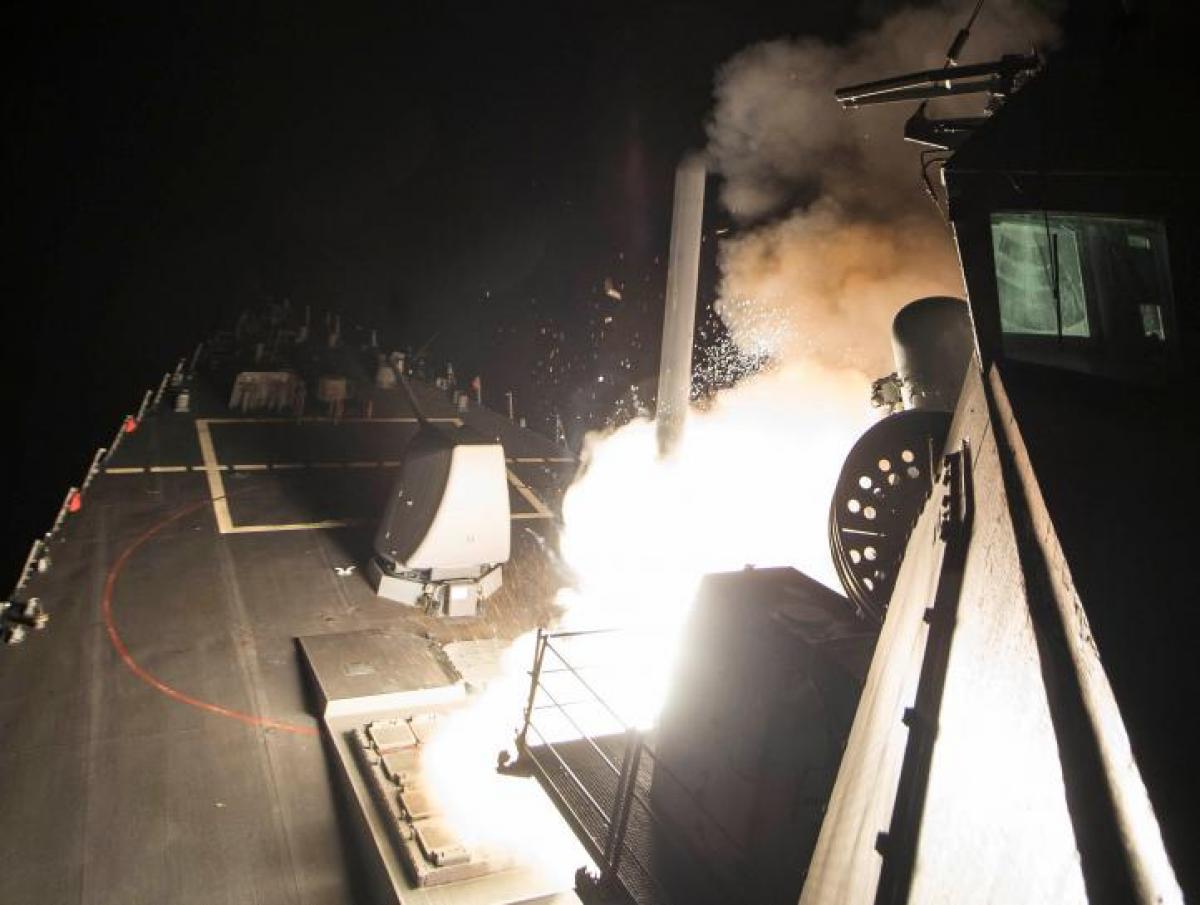 The United States fired dozens of cruise missiles at a Syrian airbase on Friday from which it said a deadly chemical weapons attack was launched this week, an escalation of the U.S. military role in Syria that swiftly drew sharp criticism from Russia.

The United States fired dozens of cruise missiles at a Syrian airbase on Friday from which it said a deadly chemical weapons attack was launched this week, an escalation of the U.S. military role in Syria that swiftly drew sharp criticism from Russia.

Two U.S. warships fired 59 cruise missiles from the eastern Mediterranean Sea at the Syrian airbase controlled by forces of President Bashar al-Assad in response to a poison gas attack in a rebel-held area on Tuesday, U.S. officials said.

Russian President Vladimir Putin believes that the missile strikes on a Syrian air base broke international law and have seriously hurt U.S.-Russia relations, news agencies cited the Kremlin as saying.

The Russian leader regarded the U.S. action as "aggression against a sovereign nation" on a "made-up pretext" and as a cynical attempt to distract the world from civilian deaths in Iraq, Putin's spokesman Dmitry Peskov was cited as saying.

U.S. officials said they informed Russian forces ahead of the missile attacks and that they took pains to avoid hitting Russian troops at the base, saying there were no strikes on sections of the base where Russians were present. But they said the administration did not seek Moscow's approval.

"Years of previous attempts at changing Assad’s behavior have all failed and failed very dramatically," Trump said as he announced the attack from his Florida resort, Mar-a-Lago, where he was meeting Chinese President Xi Jinping.

Trump ordered the strikes a day after he blamed Assad for this week's chemical attack, which killed at least 70 people, many of them children, in the Syrian town of Khan Sheikhoun. The Syrian government has denied it was behind the attack.

The Tomahawk missiles were launched from the USS Porter and USS Ross around 8:40 p.m. EDT (0040 GMT on Friday), striking multiple targets - including the airstrip, aircraft and fuel stations - on the Shayrat Air Base, which the Pentagon says was used to store chemical weapons.

At least four Syrian soldiers, including a senior officer, were killed in the attack, which almost completely destroyed the base, the Syrian Observatory for Human Rights said.

The U.S. cruise missile attack was a "one-off," a U.S. defense official told Reuters, meaning it was expected to be a single strike with no current plans for escalation.

The attacks spurred a flight to safety in global financial markets, sending yields on safe-haven U.S. Treasury securities to their lowest since November. Stocks weakened in Asia and U.S. equity index futures slid, indicating Wall Street would open lower on Friday. Prices for oil and gold both rose, and the dollar slipped against the Japanese yen.

Trump sought to cast the attack, which took place as he and Xi were wrapping up a dinner of Dover sole and dry-aged New York strip steak, as an effort to deter Syria from using chemical weapons in the future.

"Syrian dictator Bashar al-Assad launched a horrible chemical weapons attack on innocent civilians," he said later. "Tonight I ordered a targeted military strike on the airfield in Syria from where the chemical attack was launched."

"It is in this vital national security interest of the United States to prevent and deter the spread and use of deadly chemical weapons," Trump added.

Trump aides described his action as a measured and targeted response and suggested the wider U.S. strategy, which has been to avoid getting dragged into the civil war, would not change.

"We feel the strike itself was proportionate," U.S. Secretary of State Rex Tillerson told reporters.

"This clearly indicates the president is willing to take decisive action when called for," he added. "I would not in any way attempt to extrapolate that to a change in our policy or our posture relative to our military activities in Syria today. There has been no change in that status."

According to a U.S. defense official, Trump first asked about possible military action on Wednesday, after U.S. intelligence agencies confirmed that Syrian aircraft based at the al Shayrat airbase had dropped Sarin gas on civilians.

Planning began on Wednesday and accelerated at the Pentagon, the State Department and the White House on Thursday, helped by the fact that the Defense Department had numerous off-the-shelf plans, including for cruise missile strikes on Syrian airfields.

"It was a matter of dusting those off and adapting them for the current target set and timing," the official told Reuters, speaking on condition of anonymity.

AT ODDS WITH RUSSIA

The relatively quick response to the chemical attack came as Trump faced a growing list of global problems, from North Korea and China to Iran and Islamic State, and may have been intended to send a message to friends and foes alike of his resolve to use military force if deemed necessary.

"One question is whether Russia will respond in any meaningful way," said a senior U.S. official involved in planning the raid. "If they do, they will be further complicit in the actions of the Syrian regime."

Russia has air and ground forces in Syria after intervening there on Assad's side in 2015 and turning the tide against mostly Sunni Muslim rebel groups.

"Iran ... condemns use of chemical weapons ... but at the same time believes it is dangerous, destructive and violation of international laws to use it as an excuse to take unilateral actions," Students News Agency ISNA quoted Foreign Ministry spokesman Bahram Qasemi as saying.

"In both word and action, President Trump sent a strong and clear message today that the use and spread of chemical weapons will not be tolerated," Prime Minister Benjamin Netanyahu's office said in a statement.

U.S. lawmakers had a mixed reaction, with some criticizing Trump's decision to use force without getting their approval.

"Congress will work with the president, but his failure to seek congressional approval is unlawful,” said Senator Tim Kaine, the 2016 Democratic vice presidential candidate.

The U.N. Security Council was expected to hold closed-door consultations on Friday about the U.S. strike on Syria following a request by Bolivia, an elected member of the council, a senior Security Council diplomat said.