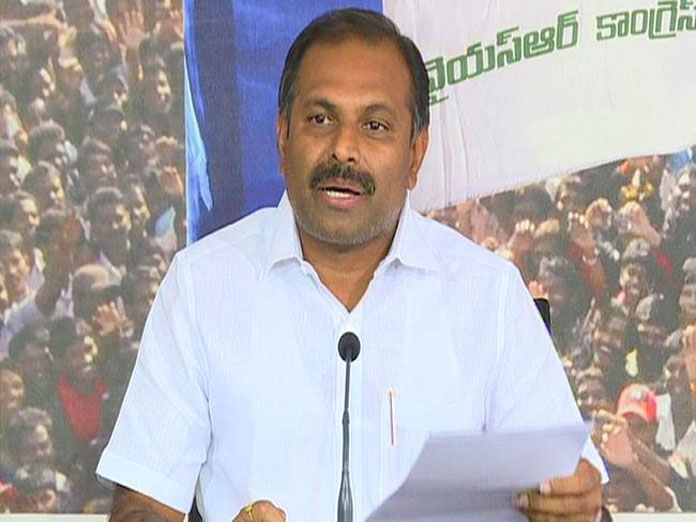 Dubbing the data included the Governors address by Chandrababu government as a bundle of lies with no proper basis, YSR Congress has said that the sanctity of the Assembly is being eroded by the Speaker with his undemocratic style of functioning

Hyderabad: Dubbing the data included the Governor’s address by Chandrababu government as a bundle of lies with no proper basis, YSR Congress has said that the sanctity of the Assembly is being eroded by the Speaker with his undemocratic style of functioning.

Speaking to reporters here on Wednesday, party MLA G Srikanth Reddy said, ‘while Chandrababu government has been staking tall claims on development with a growth rate more than that of the national average, the indicators of growth show otherwise and are not tangible in the growth of income levels of the population.

While the state claimed that it has achieved a growth rate of 10.66 % against the national average of 7.3 % it is not reflected in the income levels nor has any sector shown the trend. The manufacturing sector has fallen behind at 9.67 % against 16.7 of the national figure while the service sector fell short at 44 % while the national average stands at 54 % and there was slump in agriculture sector and the contradicting data is available with the state itself.

‘How can the state boast of such a high growth rate when it does not reflect in the increased standard of living of the people with increased income levels?’ he asked and said that any Vision should closer to present day and not far-fetched like promising something in 2024 when the mandate given was for five years ending 2019.

The point that the State is corruption-free is quixotic as it is rampant at all levels from leadership to lower-rung TDP workers and has crossed the state budget which we have brought it in to the open time and again. As TDP government has nothing to tell about its achievement it has resorted to a fresh bout of promises ahead of the elections, that too copying from the Navaratnas announced by our leader YS Jagan Mohan Reddy, he said.
The Governor’s address makes it clear that what the Chandrababu government will be giving to the DWACRA groups is just loan and not a waiver while what our leader promised is a welfare measure. The Party chose not to attend the All Party Meeting convened by the TDP, as it did not want to be part of the deception and sit with political parties that have tried to water down Special Category Status (SCS) and divided the state.

It is Chandrababu Naidu who has first aligned with NDA and could not eke out any benefit to the state and is now rubbing shoulders with Congress that has divided the state undemocratically.

The Speaker who had accepted the resignations of two MLAs did not respond to our complaint to disqualify the turncoat MLAs and has been telling the Assembly, filled with treasury benches, that he has invited the Opposition Party legislators many times but they are not coming.

We made it very clear about the constitutional violation on the crossing over of 23 MLAs and four of them being inducted into the cabinet. Unless this anomaly is solved it is morally and ethically wrong on our part to attend the assembly and be part of the proceedings, he said.