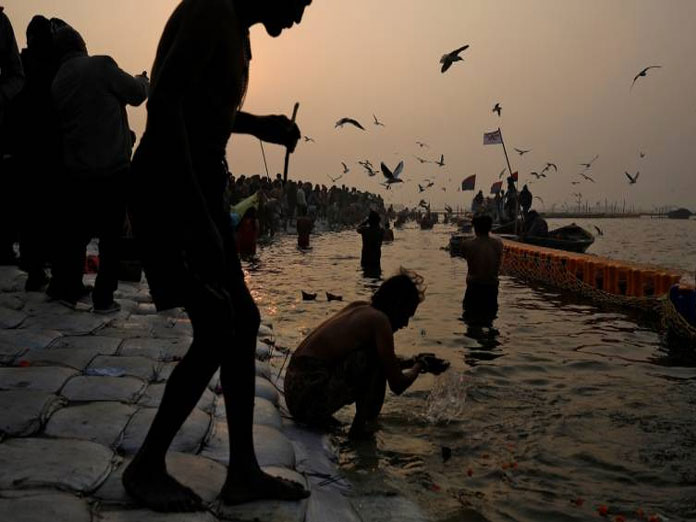 Embarking on a digital journey during the ongoing Kumbh, the Ram Naam Bank, where devotees deposit booklets after writing the name of Lord Ram, has now made its presence on the digital platform

Allahabad:Embarking on a digital journey during the ongoing Kumbh, the 'Ram Naam Bank', where devotees deposit booklets after writing the name of Lord Ram, has now made its presence on the digital platform.

The uniqueness of the bank lies in the fact that it is a bank with neither ATMs, nor cheque books; its only 'currency' is Lord Ram.

Ashutosh Varshney, who manages the bank's affairs, is carrying on the legacy of his grandfather who had set up the organisation in early 20th century.

"This bank was started by my grandfather, Ishwar Chandra, who was a businessman. Now, there are over one lakh account holders from different age groups and religions," said Ashutosh Varshney, who has set up his camp at Sector 6 of the Kumbh Mela.

"It runs under a social organisation, Ram Naam Sewa Sansthan, and has witnessed at least nine Kumbhs," he told PTI on Sunday.

The bank has no monetary transactions. Its members have a booklet of 30 pages, containing 108 columns in which they write 'Ram Naam' 108 times everyday. After completion, the booklet is deposited in the individual's account.

He said the name of the Lord should be written in red ink as it is the colour of love.

"The divine name of Lord Ram is credited in the account of account holder. A passbook is issued like other banks," said Gunjan Varshney, president of the bank situated at Civil Lines here.

Explaining the digital nature of the bank, Gunjan Varshney said, "The Ram Naam app can be downloaded free of cost from Google Play Store. The person has to register with the organisation, giving basic details such as name, age, address and also why he/she wants to write the name of Lord Ram."

"After this, the user is given a login id and password, and the first page of the 30-page booklet can be seen. It is only after that a person completes the first e-booklet (by writing Ram 108 times on each page) that he/she is given an account number," she said.

Cloud computing is the the use of various services, such as software development, networking and storage, over the internet through remote servers, often referred to as "cloud".

"Another interesting aspect of the digital version is that the writer would have to write the name of Lord Ram individually 108 times on the page, and would not be able to engage himself/herself in cut-copy-paste mode," Gunjan Varshney said. She claimed the digital version of Ram Naam Bank is gradually gaining popularity among the literate devotees in the Mela area.

"All these services are provided free of cost. Ram Naam Bank has ledgers and passbooks like any other bank, and maintains the records of its 'depositors'. The only currency that works in this bank is the name of Lord Ram," she said.

She said writing Ram Naam is called 'Likhita Jaap', and it comes in the category of writing meditation.

"This gives one a complete sense of surrender to an inner conscience and peace while writing the golden words. All the senses are engaged in the service of Lord," she said.

Ashutosh Varshney said people are not bound to worship Lord Ram to be members of the bank. They are free to worship Gods of their religions, he added.

He also said people write the name of Lord Ram in Urdu, English and Bengali apart from Hindi.

He said writing Lord Ram's name helps release suppressed emotions and resolve issues of the past.