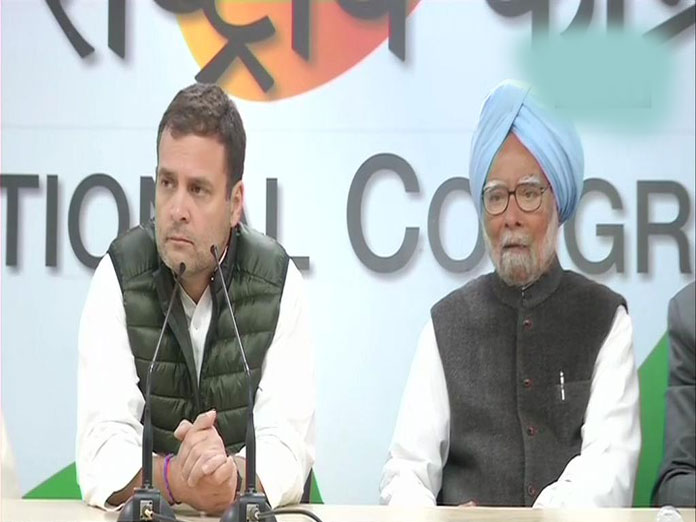 New Delhi: Congress President Rahul Gandhi on Friday asserted that terrorism cannot divide India and pledged the support of the entire Opposition to the government in the wake of Thursday's terror attack in Pulwama that killed 45 CRPF troopers.

Strongly condemning the attack, the worst-ever in Jammu and Kashmir, former Prime Minister Manmohan Singh too said that the day was for mourning and not raising politically contentious issues.

"This is a terrible tragedy and this type of violence done against the most valuable Indians - our soldiers - is absolutely disgusting. We want to make it clear that the aim of terrorism is to divide this country and we are not going to be divided for even one second," Gandhi told the media here.

Gandhi promised not to raise any contentious and political issues over the next two days and said, "The entire opposition stands together with our soldiers and the government. No force, no amount of hatred or anger can affect even one inch of the love and affection that the country is built on.

"Those who committed the violence should not believe that they can hurt us. They should realise that this country doesn't forget such things."

Manmohan Singh too expressed his grief over the tragedy and said, "We shall never compromise with terrorist forces and we will work together as one united nation to deal with terrorism.

"Terrorism is a scourge, it is something with which we can never compromise. Today is not a day to raise contentious issues. Our role is to convey our heartfelt condolences and the Congress party stands in full support of our soldiers. We will do all that is necessary to keep this nation united in support of anti-terrorist measures."