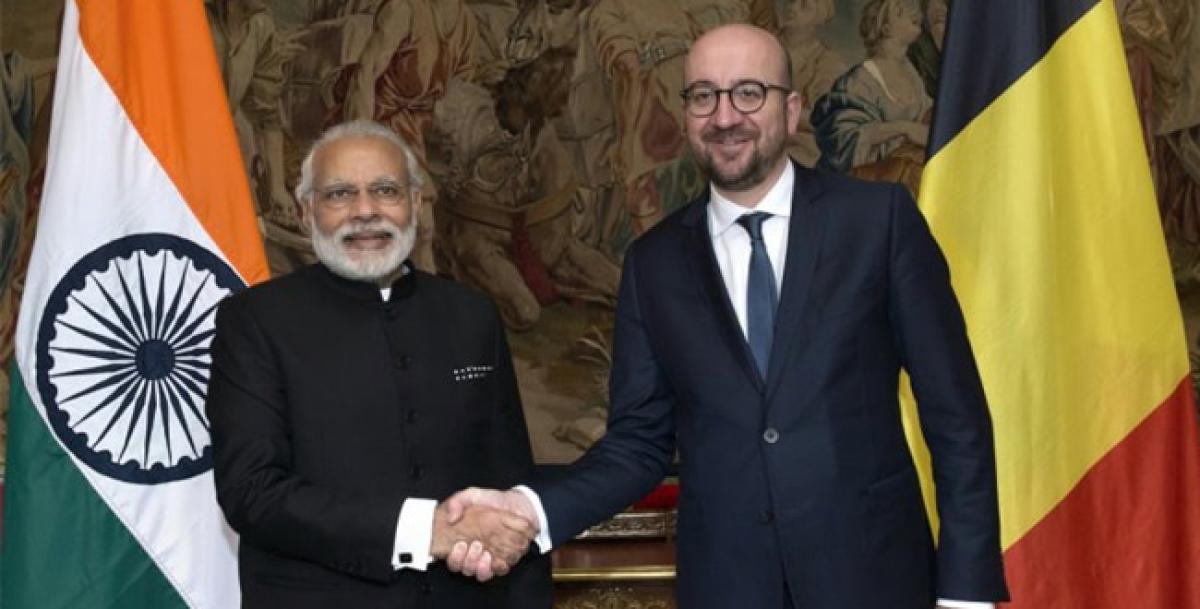 The Prime Minister recalled the horrendous terror attack in Brussels last week, and offered condolences to the families of the victims. He described terrorism as a challenge to humanity. He said the need of the hour is for all humanitarian forces to join hands to fight it.

The Prime Minister said that despite the huge threat, the world is not able to deliver a proportionate response to terror – and terms such as “good terrorism” and “bad terrorism” end up strengthening it. Shri Narendra Modi described how India has faced this scourge for forty years, which many described as a mere law and order problem for a long time, until 9/11 happened. He declared that India would not bow to terror. Shri Narendra Modi said he has spoken to many world leaders and emphasized the need to delink religion from terror. He recalled the Global Sufi Conference in New Delhi recently, where liberal Islamic scholars had denounced terrorism. He said this approach was essential to stop radicalization. The right atmosphere had to be created to end terror, he added.

The Prime Minister regretted that the United Nations had not been able to come up with a structured response to terrorism. He said the UN has not been able to fulfill its responsibility in this regard, and had not come up with a suitable resolution. He warned that institutions which do not evolve appropriate responses to emerging situations, risked irrelevance.

The Prime Minister also mentioned that the whole world which is passing through an economic crisis, had recognized India as a ray of hope. He said India has become the fastest growing large economy in the world, and this is not because of good fortune. He said this has happened despite two successive drought years. He said that this is the result of good intentions and sound policies. Talking about 2015, the Prime Minister said he wished to give an account of the work done by the Government. He mentioned ethanol blending of petrol, and ending urea shortages through enhanced production, and neem coating.

He said poor had been provided LPG connections in large numbers. He said this was largely due to the give-it-up campaign for the well-off to surrender their LPG subsidy, and 90 lakh people had done so. He also mentioned Union Budget commitments in this regard.

He said that maximum production of power and coal also happened in 2015. He said that investment in Railways has been enhanced substantially, because he believes that the Railways can be the spine of the Indian economy. He said car production and software exports had also reached maximum numbers in 2015.

He said 21 crore new bank accounts have been opened, as part of the financial inclusion drive. The Prime Minister explained how the concept of “Jandhan Aadhar Mobile” (JAM) had helped reduce corruption and leakages in LPG subsidy. He said over 18,000 villages had remained unelectrified after nearly seven decades of Independence, and he had promised to have them electrified within 1000 days. He expressed satisfaction that over 7000 such villages had been electrified till now. He also mentioned pick up in the pace of road construction. He said the whole world was surprised when he had declared a target of 175 GigaWatts of renewable energy, but the country was now on track to achieve it. He said the commitment to deliver One Rank, One Pension for the Armed Forces had also been fulfilled.

The Prime Minister said the Land Boundary Agreement with Bangladesh was an example of how contentious issues could be resolved peacefully. He mentioned the Narendra Modi App, and suggestions he had received on India-Belgium relations.

The Prime Minister also mentioned recent decisions taken for the benefit of NRIs.