Will Delhi ban firecrackers during Diwali? Legal luminaries have expressed concern over the deteriorating levels of air pollution in the city even as the Supreme Court gets ready to hear a plea by three parents, representing their vulnerable children, seeking a ban on firecrackers in Delhi during Dussehra and Diwali.

Legal luminaries have expressed concern over the deteriorating levels of air pollution in the city even as the Supreme Court gets ready to hear a plea by three parents, representing their vulnerable children, seeking a ban on firecrackers in Delhi during Dussehra and Diwali. 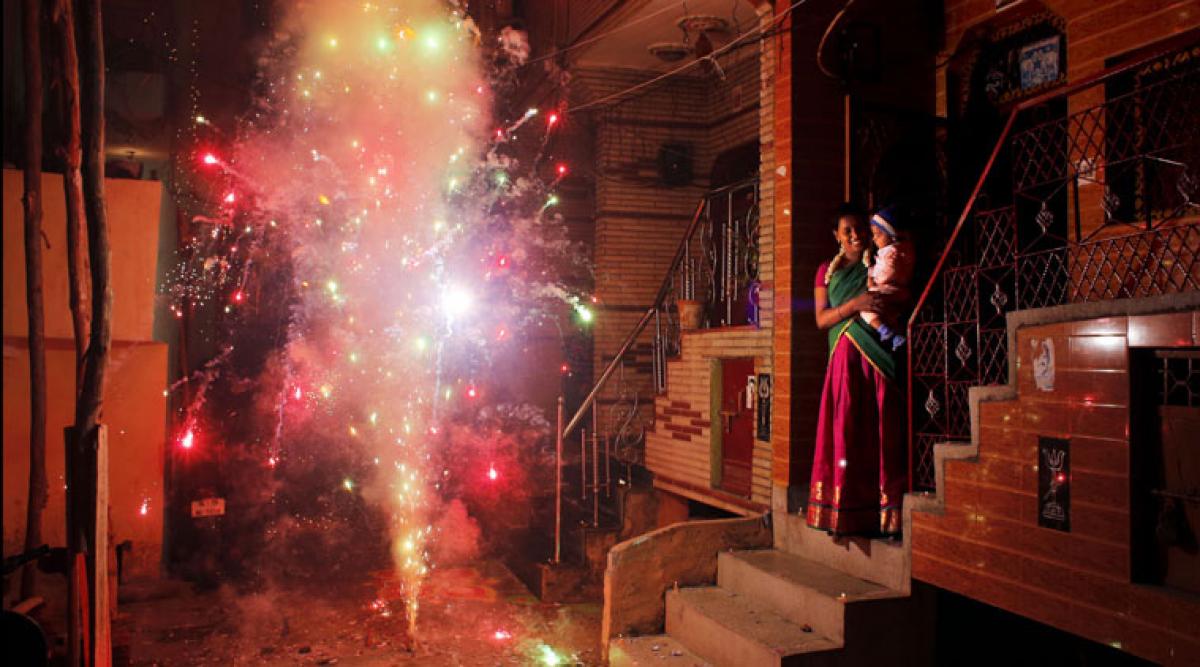 Three toddlers - six-month-old Arjun Gopal and Aarav Bhandari and 14-month-old Zoya Rao Bhasin - have, in a well-publicised appeal to the apex court, said their lungs are not yet fully developed and the large-scale bursting of firecrackers during the festival season of Dussehra and Diwali will further aggravate the already polluted air and will be seriously detrimental to their health, like thousands of other children in their formative years.
"It is an excellent plea. I wish the court grants it. I am not saying that you ban firecrackers all over the city, but don't allow them in the middle of the city. Why can't a few societies come together and gather at a park and burst low-smoke crackers for a fixed duration," wondered senior counsel Harish Salve, espousing community celebration of the festival of lights.
According to data furnished in parliament, some 80 people die from illnesses stemming air pollution in the capital every day. We can't have "death and mayhem" in the name of celebrations, he said.
Salve pointed to a woman lawyer suffering from asthma who said that every year she locks herself up inside her house so that she was not exposed to air which was already harmful and has the potential of further aggravating her ailment.
Supporting the plea by the toddlers, senior counsel Vijay Panjwani told IANS: "It is the duty of everyone to take such steps that will help in reducing the dangerous levels air pollution has crossed."
Panjwani, who represents the Central Pollution Control Board in the apex court, said that "smoke contains poisonous gases and particulate matters - which is dangerous to human health".
The worst-effected are elderly people or the very young ones. Other age groups are equally vulnerable but because of their stronger physique the ill effects are relatively less.
Underlining the urgency of combating air pollution on a war footing, Chandra Bhushan of the Centre for Science and Environment said that the "problem is that Delhi is suffering from acute pollution, especially during winter".
This can't be addressed without taking steps such as reducing the number of vehicles on the roads and banning the bursting of crackers during festivals like Dussehra and Diwali.
Pointing to serious ailments that air pollution causes, Bhushan favoured imposing a "pollution tax" that is justifiable under the principle of "polluter pays".
"Some of these steps would cause inconvenience to the people," Bhushan said, adding: "People will have to cooperate if they don't want their children and elders to suffer from diseases which have long-term ramifications."
This view found support among medical professionals. They pointed out that cumulative exposure to high levels of particulate pollution increases the risk of various respiratory and cardiovascular diseases.
However, on a divergent note, senior counsel Aman Lekhi opposed a ban on firecrackers, contending this happened over only a few days and banning this would not solve the problem.
Lekhi said the demand for banning the firecrackers is totally unwarranted as it is nothing but for publicity.
"Firecrackers are burst only for a short duration on two, three days and their harmful effect vanishes in a day or two. It is surprising that people are zeroing in on firecrackers which are an integral part of important festivals," Lekhi contended.
Show Full Article
Email ArticlePrint Article
More On