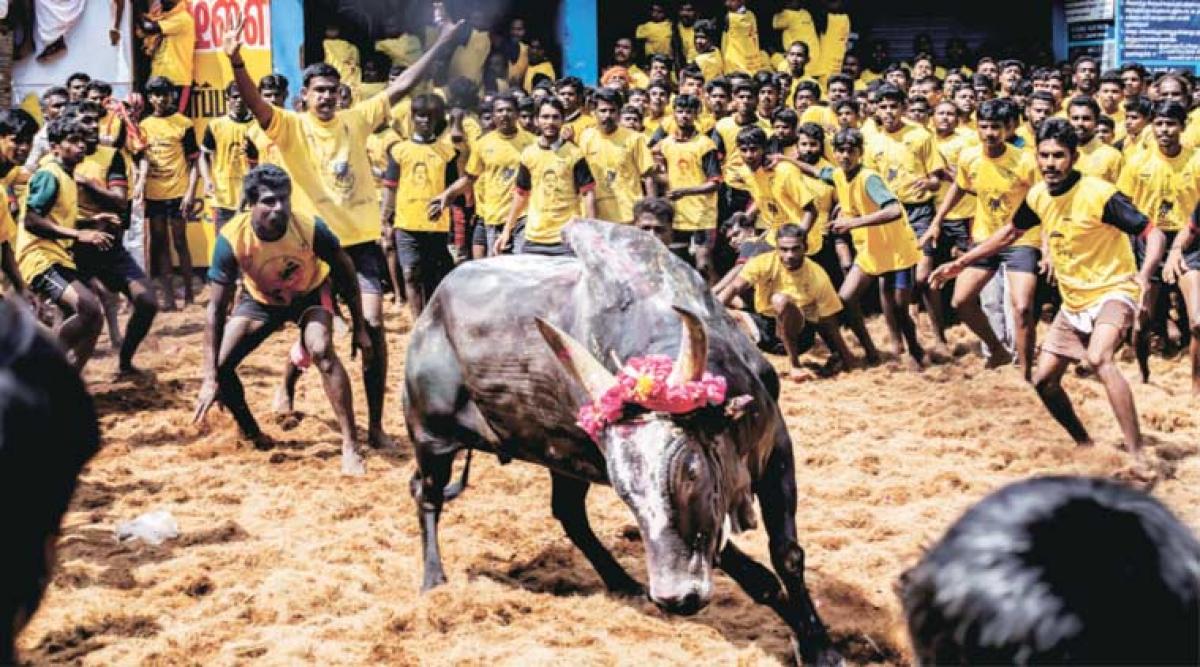 Two persons were killed and 28 suffered minor injuries during jallikattu in Pudukottai district on Sunday, while a man died due to dehydration in Madurai during protests demanding a \'permanent solution\' for holding the sport, police said.

Two persons were killed and 28 suffered minor injuries during jallikattu in Pudukottai district on Sunday, while a man died due to dehydration in Madurai during protests demanding a 'permanent solution' for holding the sport, police said.

The people injured during the incident in Pudukottai district, where scores of people and several bulls took part, were discharged after providing first-aid, they said. With an ordinance being promulgated for holding jallikattu, the sport was organised in several parts of the state, including Rapoosal in Pudukottai district.

Police said two persons were killed when they were gored by a bull during jallikattu at Rapoosal in which several bulls were used and many sportsmen took part.

Meanwhile, 48-year-old Chandramohan, from Jaihindpuram, died due to dehydration in Madurai city when he was taking part in the protests along with students and youths demanding a permanent solution for holding jallikattu, police said. At Tirunelveli, some students, including girls, fainted at a protest venue following which they were given medical treatment, police said.

Though, jallikattu was conducted in various parts of Tamil Nadu on Sunday, protests continued at Alanganallur in Madurai where people refused to hold the famous sport seeking a "permanent solution", forcing chief Minister O Panneerselvam to leave for Chennai without inaugurating it. Panneerselvam had said on Saturday he would inaugurate the bull taming sport at Alanganallur, famous for holding jallikattu events, at 10 AM.

Groups of protesters continued to stay put at several locations in the state, including the Marina Beach at Chennai, epicentre of the stir for the last six days. The protesters are seeking a permanent solution for holding the sport, besides a ban on animal rights group PETA.

As protesters demanded a permanent solution for holding the sport and raised slogans that ordinance was only a temporary measure, Panneerselvam said, "The state's jallikattu ordinance route is permanent, robust and sustainable, will be made into a law in the coming Assembly session." He reiterated that there was no ban following the promulgation of the ordinance.

The Chief Minister said the ordinance will be replaced by a law after bringing in a bill in the Assembly session, beginning at Chennai on Monday. Speaking to reporters at Madurai before leaving for Chennai, Panneerselvam said,"The ban on jallikattu has been removed completely, the sport will be held at Alanganallur, on a date decided by local people."

He said jallikattu was held in all parts of Tamil Nadu with the local administration and police taking all stipulated measures to hold the sport. Continuing blockades and agitation at Alanganallur and Tamukkam grounds, besides neighbouring Natham Kovilpatti in Dindigul, put a question mark over Panneerselvam inaugurating jallikattu.

Panneerselvam, who had announced that he would inaugurate jallikattu at Alanganallur, had to stay back in a hotel here following the stir there by protesters who demanded a permanent measure to be in place. Following that, Panneerselvam was expected to inaugurate jallikattu at Natham Kovilpatti in Dindigul. However, protests erupted there too placing the same demand for a "permanent solution."

At Alanganallur, protesters declined to hold the sport by blocking the entry and exit points of the sprawling sporting arena. A group of organisers had removed the bulls from the arena as well. Tension prevailed in Manojipatti village near Thanjavur when villagers refused to conduct jallikattu. They placed barricades en route to the venue where Agriculture Minister Duraikannu is expected to inaugurate it.

At Pudukottai, jallikattu was inaugurated by Health Minister C Vijayabhaskar. In Thanjavur, nearly 500 youths reportedly picketed a passenger train from Mayiladuthurai to Tirunelvelli at Kumbakonam as part of the protest.

Kangeyam cattle research centre president Karthikeya Senathipathy in a Facebook post appealed to the youths to end the stir as an ordinance has been promulgated for holding the bull taming sport. The inauguration of the 'Rekla Race' (Ox cart race), popular in Western parts of Tamil Nadu, at Coimbatore witnessed protests from students demanding a permanent solution for holding of jallikattu.

Even as the race was flagged-off by state Local Administration Minister SP Velumani, a large number of students arrived at Codisia Grounds, venue of Rekla race, and staged a sit-in on the premises. Speaking to reporters, Velumani said some "vested interests" were trying to create confusion among the students about the ordinance.

The students said they will "allow the race" to be held only after, what they called a "permanent solution", was in sight. Jallikattu was banned following a Supreme Court order in May 2014.