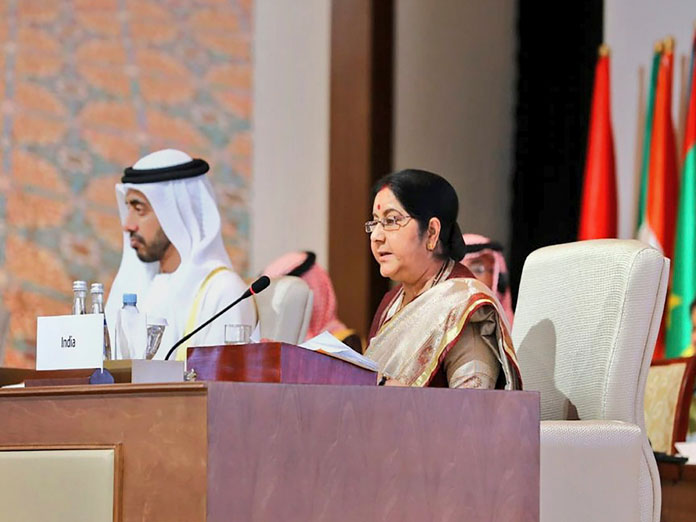 Abu Dhabi/New Delhi: Foreign Minister Sushma Swaraj on Friday urged the Organisation of Islamic Cooperation (OIC) to "act together" to combat global terrorism amid heightened tensions between India and Pakistan triggered by the Pulwama terror attack last month. Swaraj had arrived in Abu Dhabi on Thursday to attend the foreign ministers' meet of the influential grouping of 57 countries which India has been invited to as the guest of honour for the first time.

"Terrorism and extremism bear different names and labels. It uses diverse causes. But in each case, it is driven by distortion of religion, and a misguided belief in its power to succeed," she said. Terrorism is destroying lives, destabilising regions and putting the world at great peril, Swaraj added.

It was for the first time that India has been invited to an OIC meeting as guest of honour. Pakistan, a member of the OIC, tried to get Ms Swaraj ''disinvited'' from the Abu Dhabi meet following India's air strike on a terror camp in Pakistan but its request was turned down.Pakistan's Foreign Minister has said he will skip the meeting of foreign ministers because the OIC had invited Swaraj to the event, adding that lower ranking officials would attend to represent the country's interests.

Ties between India and Pakistan have plunged to a new low after a suicide bomb attack in Jammu and Kashmir's Pulwama last month that killed 40 paramilitary troops.In her speech, Swaraj said, "I carry the greetings of my Prime Minister Narendra Modi ji and 1.3 billion Indians, including more than 185 million Muslim brothers and sisters. Our Muslims brothers and sisters are a microcosm of the diversity of India itself." She also asserted that just as Islam literally means peace, none of the 99 names of Allah mean violence. "Similarly, every religion in the world stands for peace, compassion and brotherhood," Swaraj said.