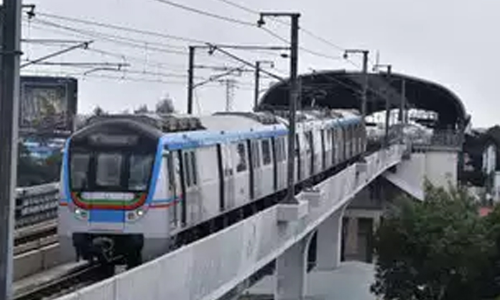 Modi to launch host of projects

The completely elevated section with six stations -- Sector 34, Sector 52, Sector 61, Sector 59, Sector 62 and Noida Electronic City -- will benefit the people of Noida and connect the satellite city with the national capital.

“The Prime Minster is slated to inaugurate the Noida City Centre-Noida Electronic City section on Saturday from a rally in Greater Noida. Services will begin the same day at 4 pm,” a senior DMRC official said.

Commissioner of Metro Rail Safety S K Pathak had recently accorded the mandatory approval for the commencement of passenger operations on the 6.675-km Noida City Centre - Noida Electronic City section of the Blue Line, which was inspected on Monday, the official said.

In a statement issued on Friday, the Prime Minister's Office said Modi will visit Greater Noida in Uttar Pradesh and launch various development projects at Pt. Deendayal Upadhyaya Institute of Archaeology there.

The institute is under the Archaeological Survey of India (ASI) and is located in Knowledge Park-II, Greater Noida. “He will inaugurate the Noida City Centre – Noida Electronic City Section of the Delhi Metro.

The new section will provide a convenient and faster mode of transport for the residents of Noida. It will also decongest the roads and provide an environment-friendly mode of transport,” the PMO said in the statement.

The Khurja thermal power project will be based on supercritical technology with two units of capacity 660 MW each, equipped with latest emission control technology to protect the environment, has high efficiency and uses less fuel to generate power, it added.

“The Khurja plant will transform the power deficit situation of northern region, particularly Uttar Pradesh and will benefit states like Uttarakhand, Rajasthan, Himachal Pradesh and Delhi.

The project is expected to generate substantial direct and indirect employment and overall development of Bulandshahr district and nearby districts of western Uttar Pradesh,” the statement said.

The Buxar thermal power plant will be launched through a video link. The plant will be based on supercritical technology with two units of 660 MW each, equipped with latest emission control technology to protect the environment and has high efficiency.

The Buxar plant will transform the power deficit situation in Bihar and the eastern region, the PMO statement said. Modi will also address a gathering, it said. The Noida extension line will benefit the people of Noida and bring the Blue Line close to the recently-opened Aqua Line, which connects Noida and Greater Noida.

The Sector-52 station of the DMRC's Blue Line is very close to the Sector-51 station on the Aqua Line, operated by the Noida Metro Rail Corporation (NMRC) and its commuters are awaiting last-mile connectivity between the two lines.

Plans are afoot to connect the two lines through a dedicated pathway and a carriage-way for e-rickshaws, officials said earlier.

There is a distance of around 300 metres between the Sector-51 metro station, the terminus of the Aqua Line in Noida and the upcoming Sector-52 metro station of the Blue Line.