Who shall bear the cross? 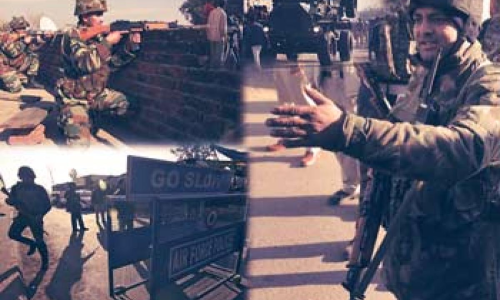 Questionably, Washington had alerted Delhi at least 24 hours earlier that terrorist would strike the Pathankot air base. Our response? We twiddled thumbs

A taxi driver was killed on 31st December, a few hours later the SP’s car is hijacked, one terrorist speaks to handlers in Pakistan, another to his mother, “Mummy I am going to be a martyr.” Mother: Beta marne se pehle khaana kha lena.” For 15 hours they roam free in Army fatigues till all hell breaks loose.

Oh! so predictable was New Delhi’s response. It went blue in the face being macho and promised to give a muah-torh jawab for three days, and then it’s back to business as usual. No matter this is the second major attack on Punjab after Gurdaspur in February last. Leaving seven soldiers killed and 20 seriously injure in a 36 hours operation at the air base.

Undeniably, the government has a lot of explaining to do. Till date no one is any the wiser about what exactly happened. Worse, even if some in the government know, none is telling.

What stands out is our lack of preparedness, that our supposedly vigilant intelligence agencies are not working at all alongside glaring security lapse in actionable intelligence and co-ordination. Crucial ingredients for safeguarding India’s national security fabric. From beginning to end, the entire operation sucked.

Questionably, Washington had alerted Delhi at least 24 hours earlier that terrorist would strike the Pathankot air base. Our response? We twiddled thumbs.

Why was the air base’s perimeter not secured despite warnings? Where was the three-layer security? There is no patrolling at night as retired guards have been reemployed and are unfit so there is none to check whether the periphery’s flood lights are working. Why was the National Security Guard (NSG) sent in unfamiliar terrain when the Army has a crack Special Forces unit nearby at Nahan? What about surveillance equipment to guard the base?

The National Investigation Agency set up with much hoopla needs to clarify how it helps various State governments probe blasts? Yet its officials ensconced in New Delhi’s air-conditioned offices brush their responsibility by claiming lack of skilled manpower.

In this age of real politik, India will remain at the mercy of terrorist organizations which will always have the upper hand in choosing the time and place of the next attack. Our leaders should not be under any illusion that the death of the fidayeens will deter jihadis operating from Pakistan and their State sponsors from carrying on their irrational jihad.

From Kargil down Mumbai, Bangalore, Hyderabad, Gurdaspur etc the story, comments and diagnoses have been heard before. They underscore the Government lacks the political will to fight terror or does not have the capability and skills to meet the threat or secure the concerned area.

Our coastal security apparatus comprising registration of vessels & ID cards to fishermen are both incomplete. Sadly, instead of learning lessons from previous attacks, we continue making the same mistakes: Casual indifference. It is imperative New Delhi realise that a new qualitatively more complex security threat is emerging in the region and there is an urgent need to address it.