Why we love to hate! 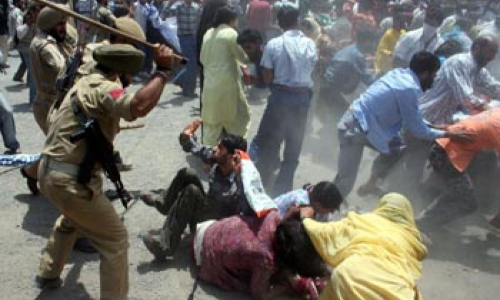 What is with us Indians? Why are we so blasé’ about vandalism? Why do hooligans always get the better of us? As for our polity, their opinion or vacuous outpourings of angst or grief are just that.

What is with us Indians? Why are we so blasé’ about vandalism? Why do hooligans always get the better of us? As for our polity, their opinion or vacuous outpourings of angst or grief are just that. Why are we so hypocritical and helpless? These are some questions that bombard like staccato gunshots when we talk of Hindu-Muslim violence.

Tragically, the pseudo-secular wheel seems to have turned a full circle and communalism is once again the cause célèbre this week. The latest to earn this ignominy as the new hot-bed of revengeful hatred is West Bengal’s Malda district which was up in flames with torched vehicle and police station destroyed following violence between Hindu and Muslims.

The genesis of the mayhem were statements made by two leaders on opposite side of the political spectrum, Samajwadi’s Azam Khan and self- styled Hindu Mahasabha leader Kamlesh Tiwari, 3 December. While the former likened RSS men to homosexuals, the latter raised questions about Prophet Muhammad’s sexual orientation.

But it took an exact month, 3 January for the hate speeches to be decoded in to violence. Go figure. With both communities reflecting their bigotry, the politics of competitive communalism has once again begun. Yawn. Predictable, was Chief Minister Mamata Banerjee’s attempt at dousing the conflagration by reiterating that the flare-up was not communal but a dispute between BSF personnel and local residents. Really? The BJP on the other hand, accused Banerjee of pursuing vote bank politics.

Making matter worse, the district administration prevented a six-member fact finding team comprising five BJP and one CPM MPs from entering Malda. Resulting in a slug fest between the Trinamool and BJP with both accusing each other of polarising voters before Assembly elections next year. Innumerable examples right from Godhra 2002, J&K 2008, Muzaffarnagar 2013, Meerut 2014 et al which can be cited to establish how Parties try to reap electoral benefit out of such incidents.

Recall, last October, all hell broke lose in Dadri Again, in July 2012, violence between Bodos and Muslims broke out in Assam. But Muslims called for a protest at Mumbai’s Azad Maidan which unsurprisingly turned violent as it was hijacked by radical elements who whipped up sentiments by flashing inflammatory photographs and making vitriolic speeches.

In July 2008, communal hatred barred its poisonous blood-soaked fangs over an innocuous order by the Congress J&K Government transferring 39.88 hectares of forest land to the Shri Amarnath Shrine Board to erect temporary shelters for thousands of pilgrims who annually trek to the Himalayan cave shrine.

Naturally, all hell broke loose with the Muslim-majority Kashmir reacting violently. A section of the Kashmiri Muslims, led by the Hurriyat and other separatist leaders alleged the land transfer was aimed at changing the demography of the region and a “ploy to turn Muslims into a minority in Kashmir.”

Unsurprisingly, the Congress-NC Government hastily revoked the transfer order, which, in turn, provoked an angry backlash from the Hindus, with Jammu burning amidst large-scale violence and protests. The BJP seized the opportunity and the issue to turn the tables on the Congress Government by alleging that it had given into the Muslim separatists’ demand and the “anti-Hindu” nature of the revocation order.

Presenting itself as the defender of secularism and democracy, the BJP and its Sangh Parivar decided to use the land transfer issue as a major Hindutva plank to campaign against the Congress Government at the Centre and the Valley by calling for a nation-wide bandh, no matter that it would drive a further wedge between the Hindu-Muslim communities and affect normal life.

Questionably, what do protesters of such incidents achieve? Zilch. Only the aam aadmi and innocent security men became targets. In fact nobody has the right to indulge in combustible attacks. All forget that violence does not achieve anything and neither does insult of a religious figures,
Undoubtedly, no matter what the provocation, the rule of law cannot be made to go for a toss.

Nothing justifies violence or the call to commit violence in direct contravention of the law. If a Hindu has anger against his Muslim brethren or vice-versa they should take up the legal battle against them. Alas, this repeated finger pointing between Hindus-Muslims reveal that the so-called secular or communal parties are rolled in one each boasting it’s Political Terrorist.

Sadly, given the level of dishonesty and in keeping with their vote-bank philosophy of making quotas and queues the perfect fodder for the electoral milch cow, on set of our so-called ‘secular’ netas have made the Muslim vote bank the tour de force of Indian politics. It’s all about pyare Mussalman mujhe vote do!

On the other, the perceived communalist, read pro-Hindu party like the BJP reap a windfall by playing the Hindutva card. Making matters worse, our netas seem to suffer no sense of guilt or qualms of conscience. Where do we go from here? Pander to rabid rabble rousers? Pander to the politics of vote banks?

Malda should be yet another lesson to our polity to desist from playing the communal card for vote bank gains, look beyond at the perilous implications of their decisions wherein the country is being pushed towards brazen communalism, ignoring national interest Clearly, it is time now for our leaders to spare a thought for all those who have lost their lives in the meaningless violence over the years and delink religion from politics.

Importantly, they need to understand that by playing Hindus and Muslims against each other they are only serving their vested interests. Communalism thrives on one community’s hate for the other along-with playing up the psychosis of retaliation. At the end of the day, when our polity does a cost-benefit analysis, they need to answer a simple question: Is there vote-bank politics really worth the price the country is paying? Who will bear the cross?