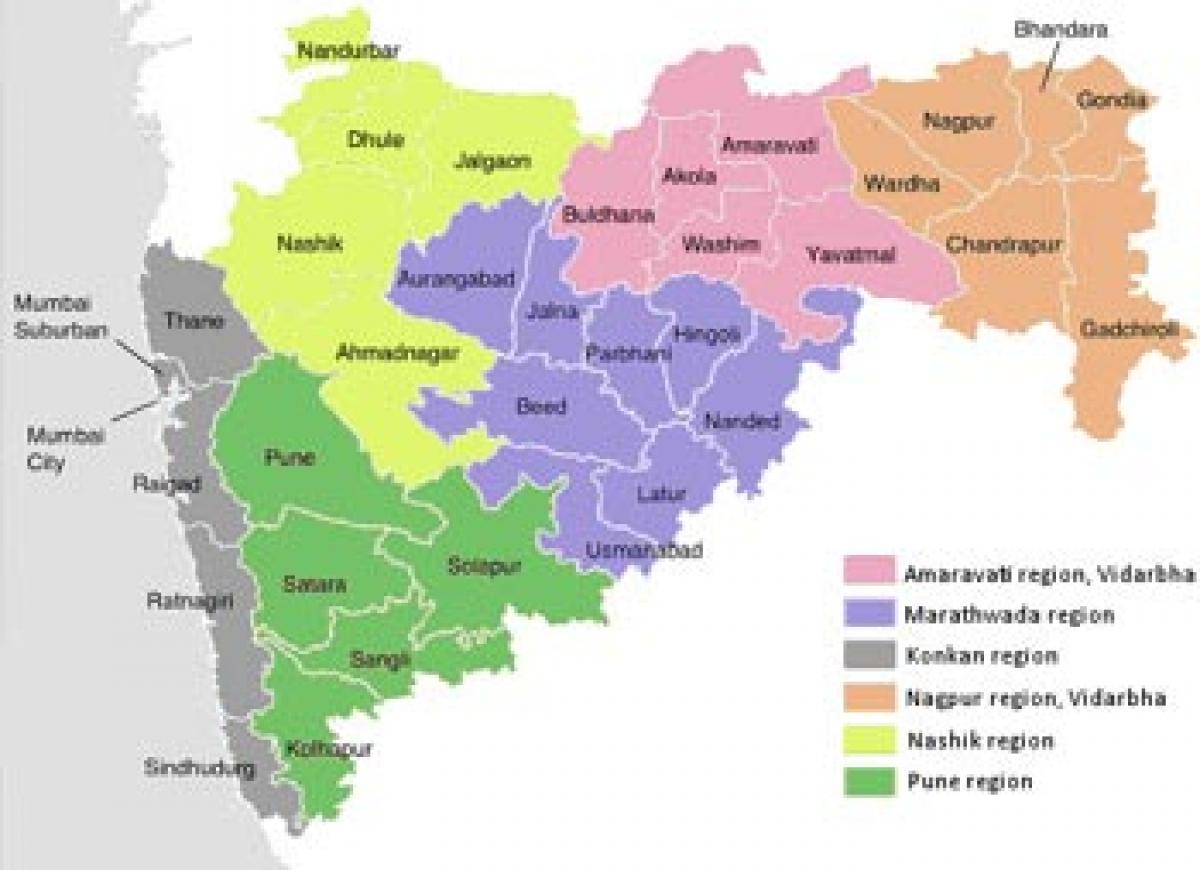 The Gross District Domestic Product (GDDP) of the five districts that form Amravati region (Rs 51,947 crore), a part of backward Vidarbha, was...

The Gross District Domestic Product (GDDP) of the five districts that form Amravati region (Rs 51,947 crore), a part of backward Vidarbha, was Maharashtra’s lowest in 2013-14; yet it was more than Jammu and Kashmir (Rs 45,847 crore) in the same year.

The GDP of Marathwada (Rs 83,765 crore), a region of eight drought-prone districts, in 2013-14 was more than Uttarakhand (Rs 70,926 crore). With such powerful regional economies - even in its backward areas - Maharashtra is India’s most prosperous state with a Gross State Domestic Product (GSDP) of $148.2 billion (at constant 2004-05 prices), almost equal to that of Pakistan ($150 billion at constant 2005 prices).

Yet, Maharashtra’s overall economic power hides vast disparities. It has some of India’s poorest people, four of its 36 districts are among India’s 106 most backward, and some districts, such as rural Thane on the doorstep of rich Mumbai, have areas where 30 per cent (in 2009, the last available data) children suffer malnutrition, comparable with Arunachal Pradesh and Tripura (2009 data).

Vaidya supported former Maharashtra advocate general Shrihari Aney, who suggested that the people of Marathwada should get their own state. For those comments, Aney was asked to quit by Chief Minister Devendra Fadnavis.

Konkan’s economy would be fourth, Marathwada 22nd among states. If we arrange the five regions of Maharashtra - Konkan, Pune, Nashik, Marathwada and Vidarbha - along with 28 remaining states of India, Konkan would rank fourth in the list. Our report of the state’s five regions, ranked by prosperity:

Konkan Region
Area: 30,746 sq km; six districts (Mumbai, Thane, Raigad, Ratnagiri, Sindhudurg and Palghar)
Population: 28.6 million. If it were a state, it would rank 15 (of 28 states) by population, with more people than - among others - Punjab, Haryana, Chattisgarh and Jammu and Kashmir.
GDP: Rs373,959 crore ($61.8 billion), accounts for 41 per cent of Maharashtra’s GSDP. As a state, Konkan would be richer than West Bengal, Telangana and Rajasthan and rank alongside countries like Cuba and have a GDP more than neighbouring Sri Lanka.
Profile: The Konkan region, along the western coast, is Maharashtra’s most populous and prosperous region. The region’s capital, Mumbai - home to India’s financial, banking and entertainment industries - is the state’s richest district. Neighbouring Thane district has one of India’s highest per capita incomes. The region is known for its Alphonso mangoes and costal fisheries.

Vidarbha
Area: 97,321 sq km; 11 districts across two regions - Amravati (Buldhana, Akola, Washim, Amravati and Yavatmal districts) and Nagpur (Wardha, Nagpur, Bhandara, Gondia, Chandrapur and Gadchiroli)
Population: 23 million. If it were a state, it would rank 18 (of 28 states) by population, with more people than - among others - Jammu and Kashmir,

Uttarakhand and Himachal Pradesh.
GDP: Rs132,750 crore ($21.9 billion), accounts for 14.8 per cent of Maharashtra’s GSDP.
As a state, Vidarbha would be poorer than Odisha and Punjab and rank alongside Cameroon, Serbia and Tanzania.
Profile: Maharashtra’s eastern region achieved national infamy for suicides, mostly by cotton farmers. Formerly the princely state of Berar, Vidarbha is largely agrarian, with cotton, jowar, soybean and pulses its main farm output. Yavatmal, Gadchiroli and Chandrapur are among India’s most backward districts, large swathes of areas driven by Maoist insurgency.

Nashik Region
Area: 57,806 sq km; five districts (Nashik, Dhule, Nandurbar, Jalgaon and Ahmednagar)
Population: 18.5 million. If it were a state, it would rank 19 (of 28 states), with more people than the National Capital Territory of Delhi, Himachal Pradesh and Jammu & Kashmir.
GDP: Rs104,594 crore ($15.7 billion), accounts for 11.6 per cent of MaharashtraÂ’s GSDP.
As a state, Nashik region would be equivalent to Jharkhand but poorer than Chhattisgarh and rank alongside Botswana and Bolivia.
Profile: Nashik Region is known for its agro-processing industries, especially wine. Of 46 wineries in India, 43 are in Maharashtra with 22 of them around Nashik, the main city of Nashik region.

Pune Region
Area: 57,054 sq km; five districts (Pune, Satara, Sangli, Solapur and Kolhapur)
Population: 23.4 million. If it were a state, it would rank 18 (of 28 states) with more people than Jammu and Kashmir, Uttarakhand and Himachal Pradesh.
GDDP: Rs201,700 crore ($33.3 billion), accounts for 22.4 per cent of Maharashtra’s GSDP.
As a state, Pune Region would be poorer than the new state of Telangana and Kerala and would rank alongside Lebanon and Bulgaria.
Profile: The region is known as the sugar belt of Maharashtra; it is the second-largest producer of sugarcane in India and hosts the country’s second-largest sugar-processing capacity.

Marathwada
Area: 64,590 sq km; eight districts (Aurangabad, Jalna, Parbhani, Hingoli, Beed, Nanded, Osmanabad and Latur)
Population: 18.7 million. If it were a state, it would rank 18 (of 28 states), with more people than Jammu and Kashmir, Uttarakhand and Himachal Pradesh.
GDDP: Rs83,765 crore ($13.8 billion), accounts for 9.3 per cent of Maharashtra’s GSDP.
As a state, Marathwada would be poorer than Chhattisgarh and Assam, and would rank alongside Bosnia, Afghanistan and Paraguay.
Profile: The region is known for its drought, falling as it does in Maharashtra's rain-shadow area. It is the most underdeveloped area in the state after Vidarbha. Marathwada also has the second-highest number of farmers' suicides after Vidarbha.

Why smaller states do better?
Smaller states do better than bigger states, IndiaSpend reported previously, analysing the progress of breakaway states. Carving out smaller states from larger states help better governance because it allows “de-averaging” both the problem and solution, which means allowing administrators to get a true picture of regions instead of an average that hides problems, Nikhil Ojha of Bain and Co, a consultancy, wrote in his Mint column.

Note: All population figures are from the 2011 census. The GDP figures are for 2013-14, the base year for all economic comparisons. (In arrangement with IndiaSpend.org.The views |expressed are those of IndiaSpend. Feedback at: respond@indiaspend.org) _ IndiaSpend Team