Getting cleansed from inside out… 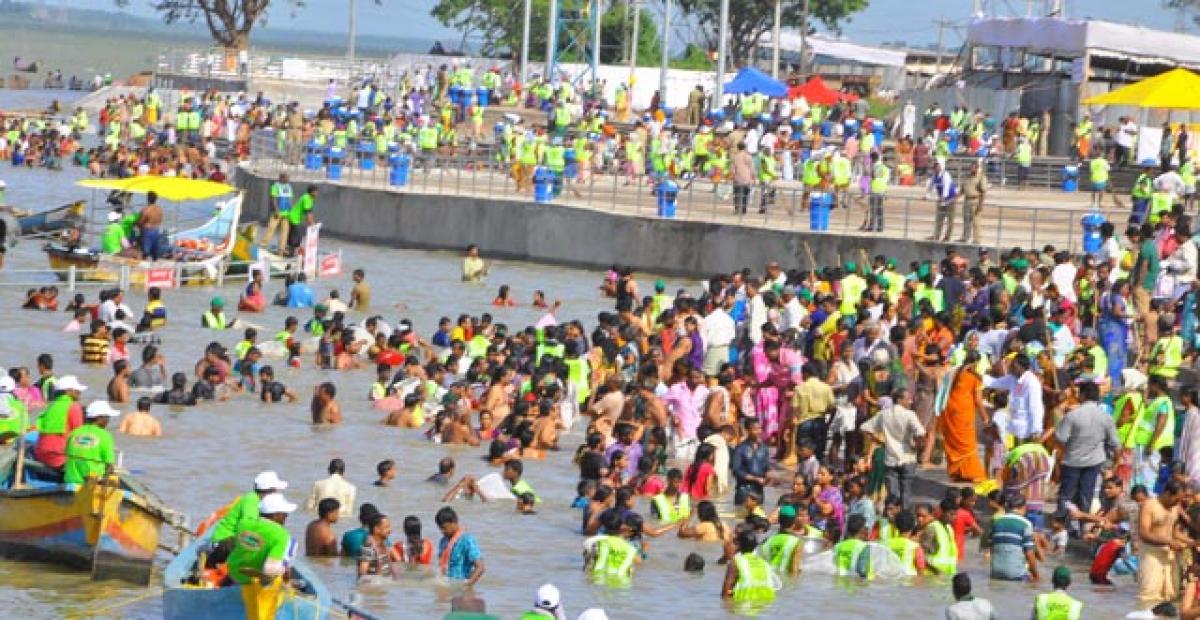 The laser show, bursting of fire crackers, daily Harathi to river Krishna on the lines of the one prevalent at Varanasi and Haridwar have combined to...

Both the Telugu-speaking States are in the grip of the ever enchanting Pushkar spirit. There is pomp and religious fervor all around. A particularly long weekend that began on Friday and culminates on Monday, this is one Independence Day celebration that will linger in the minds of millions of devout perhaps till the next 12 years!

By all accounts, all roads are leading to Pushkar ghats in both the States. This pushkar also assumes significance since it is the first Krishna Pushkaram after the bifurcation of Andhra Pradesh. Given the political equations at stake, both State governments have taken it as a prestige issue and have made elaborate arrangements to ensure a free and secure ‘pilgrimage’ to the crores, who are expected to throng the ghats for performing all the rituals that are symbolic of Pushkaralus.

Arrangements include free transport, kitchen for supply of free food, free medical camps, among several other such facilities intended to make it convenient to the people. A closer look at the run-up to the mega event brings forth several differences in the approach being adopted by the respective government and make for a study in contrasts. While pomp and grandiosity is distinct in Andhra Pradesh, it seems comparatively low-key in Telangana. The laser show, bursting of fire crackers, daily Harathi to river Krishna on the lines of the one prevalent at Varanasi and Haridwar have combined to become major attractions for those taking a holy dip in the ghats at Vijayawada.

The Chief Minister N Chandrababu Naidu is taking the lead by participating in the Harathi every evening every time he is in town. The government of Andhra Pradesh wants to cash in on the extravaganza as a vibrant platform to bolster the State’s tourism prospects. To what extent, it will be successful remains to be seen. Telangana State ought to have utilised the occasion to promote pilgrimage destinations as a means to boost tourism inflows. There is no denying the fact that in the undivided Andhra Pradesh, prominence was never given to important temples in Telangana region although some like Jogulamba temple are among the Shaktipeethams. No serious effort was made to develop or popularise them.

If the incumbent Telangana government had chalked out an action plan to organise cultural events at major congregation points during the Pushkaralu celebrations, it could have caught the attention of domestic tourists, who plan weekend holidays. This would have certainly laid the foundation for improving tourism that in course of time could swell the State coffers. On the political front, the Pushkaralu has come as a timely morale-booster for Naidu, in particular, as it will divert the attention of the people from the opposition tirade that is questioning his sincerity at getting special category status for the State.

This has caused seamless embarrassment to the Telugu Desam Party (TDP), which failed to blunt the opposition’s attacks in Parliament. A successfully conducted Pushkaralu will help both the governments, particularly the AP government, to pat its own back. Meanwhile, unknown to most, the event is likely to throw up a major scientific challenge to the respective state governments given that there could be an enormous increase in pollution levels.

Contrary to the claims of the two governments that they are testing the quality of water and that there was no presence of e-coli, the fact remains that pollution levels will be inordinately high because the rituals are bound add to the pollution levels. In the absence of any substantial awareness campaigns, the fact remains that by and large we are notorious for tossing puja material into the river water once the rituals are done and over with.

To make matters worse, we remain oblivious of the pollution we give birth to with the use of plastic bags to carry flowers, turmeric powder and vermillion to the ghats. We tend to cleanse our body giving a damn to the filth we spread along the way, particularly by throwing the puja material in plastic bags. This is a sure-shot recipe for avoidable disaster even as the grounds become a breeding spot for all sorts of illness-bearing insects.

Water contamination will be so high that a dip may result in causing ill-health. A fatal attraction is what it is called as! Events like Pushkaralu should not be seen only from religious angle. Those who feel that they are washing off their sins should learn some lessons from such assemblages.

If each one ponders for a second about the adverse impact they could be causing to ones taking the dip later and if they become wiser (a la once bitten twice shy) and are duly ‘enlightened’, the entire lot can breathe easy. Collectively, such a consideration for fellow-beings will result in making rare spectacles like Pushkaralus truly fascinating experiences.