All eyes on all-party visit to J&K 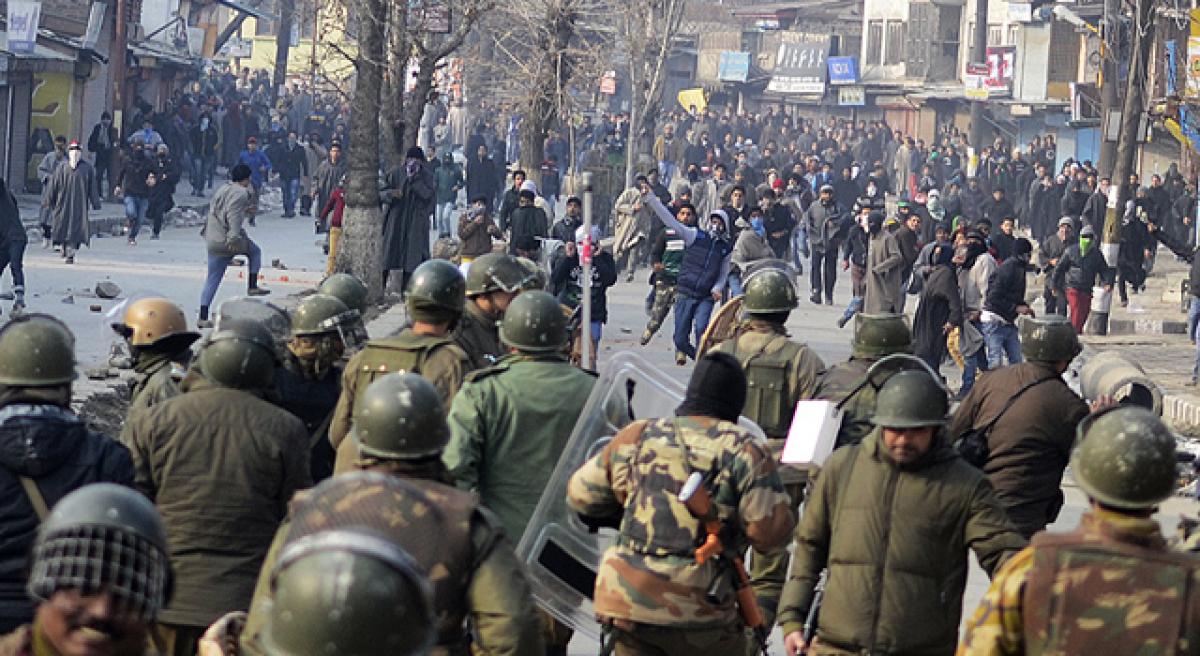 Preparations are afoot for an all-party delegation to visit Jammu & Kashmir, after over 50-odd days of unrest. Curfew in some parts has been lifted in...

Preparations are afoot for an all-party delegation to visit Jammu & Kashmir, after over 50-odd days of unrest. Curfew in some parts has been lifted in the Valley, but how soon normalcy will limp back to the Valley is anybody’s guess. Will the youth heed Chief Minister Mehbooba Mufti’s appeal to “return to educational institutions instead of being on the streets?” Importantly, it needs to be seen how much support her views get from the political parties’ leadership.

Handling the crisis has been the biggest challenge for the young Chief Minister, since she took over in April. She has tried to look objectively at the entire situation prevailing. In not trying to throw homilies, Mehbooba has tried to reach out to the people by trying to talk about the over month-long violence that had virtually brought all social, economic, educational and political activities to a standstill in the Valley.

The problem, which flared up after the killing of Hizbul Mujahideen jehadi Burhan Wani, like others, has completely baffled her as she noted at a gathering that virtually every day there is some militant or the other killed but this kind of disturbances had never taken place before. For what happened earlier, there used to be a reason or two like in 2010 the alleged rape of two women in Shopian, which eventually was disproved as it was found to be an ordinary case of drowning.

But the Kashmiri separatists had whipped up an agitation which lasted for days and the Valley was completely shut down. This time, however, there was no reason for such an eruption. No Kashmiri innocent was killed as the man killed was a militant – a potential killer of Kashmiri policemen or Kashmiri innocents.

The Chief Minister thought this time it was not spontaneous as it appeared that a certain amount of preparation had gone into it. Evidently, the organisers of the violence were waiting for an opportunity to inflame passions and Wani killing provided just the right one and was opportune.

Obviously, it was the work of the separatists and their cohorts. Mufti had said, yes, police were also violent but what could they do against dire provocations. “You snatch away their guns and keep pelting stones on them,” she has lamented. Under such circumstances any security force would try to quell such ghastly civil violence using whatever methods they could muster. In the process, some civilians were killed but some from the police forces were also killed and a large number of them were wounded.

What is more, the Chief Minister has been vociferous about the agitationists using women and children as shields. Children as young as 10 years were wounded. What was a 10-year old doing in the agitation? If the child was hit by pellets the blame should go to his parents who did not take care of him by keeping him at home. Allowing the child to join violent demonstrations was not only unwise it was also criminal, presumably, as it was abetting violent demonstrations.

Mufti repeated the same arguments at the press conference the other day addressed jointly by her and Home Minister Rajnath Singh. She even got worked up and appeared to be accusatory and snapped at a reporter bringing the conference to a close. She apparently had caught on to the machinations of the separatists, who were till now not able to organise a long drawn-out confrontation.

This time, as is evident, a large number of militants have been pumped into the Valley by Syed Salahuddin’s Hizbul Mujahideen, a proxy for the ISI of Pakistan, located in Pakistan Occupied Kashmir. A thousand of its trained militants were claimed to be in the Valley and another thousand were waiting to infiltrate at an opportune moment. The figures could be exaggerated as the militants tend to exaggerate their prowess. But, there is no denying the fact that it is the foreign militants, ably assisted by the mischievous separatists Geelani and Co., are behind this stretched out confrontation.

At the back of it, however, is the ISI of Pakistan which is the mastermind of such disturbances. I have immense faith in what former RAW chief AS Dulat has written in his “Kashmir – the Vajpayee years” because he was one official who met and developed a kind of trust amongst the militants about his bona fides. They would come to him and talk about all things regarding Kashmir militancy.

During one such conversation, a senior and influential militant had told him that at Dubai an ISI official had told him that nothing happens in Kashmir without the ISI’s initiatives. It is ISI that “Calls the shots in Kashmir”. From sending terrorists across the borders to organising chaos and mayhem, it is the ISI which does it all. Everyone is, therefore, aware that the whole thing is inspired by the Pakistanis and their agencies with the assistance of their proxies in Srinagar. Only innocent Kashmiris are being used as cannon fodder.

Be that as it may, the Chief Minister must tread ask her party men to tread cautiously. A case in point is of the alarming views on the present unrest by Musaffar Hussain Baig, a former Deputy Chief Minister and a Member of Parliament. He has said that the local “struggle” runs the risk of becoming a (kind of) religious extremism – of losing its political goal and getting a “religious vision.”

He seems to be quite ill-informed as the separatists know their political goals are never going to be achieved. As Dulat has recorded, even President Musharraf, whom they had met in Delhi, had told them there cannot be re-drawing of the boundaries as India would never allow that. Hence, they needed to change their thinking.

Besides mercifully, religious undertones are presently absent in the movement. He sees a danger of the unrest becoming a part of the “international struggle.” Being an MP from the PDP perhaps such a comment was not expected from him. If he harbours this kind of a perception it would have been wiser for him to communicate it to Mufti instead of airing his apprehensions in public through a newspaper column to set alarm bells ringing.

The whole thing is nothing but Pakistan’s way of inflicting those “thousand cuts” of Zia ul Haq on India. As Mehbooba repeatedly said it is the 5% of people, presumably the separatists, who create these problems. The remaining 95% of Kashmiris want to live in peace and harmony. India has therefore, to ride out the present difficulties by being firm and dominate over the disturbed areas. All eyes would be on what next the all-party delegation, which visits the State this Sunday, has to offer.