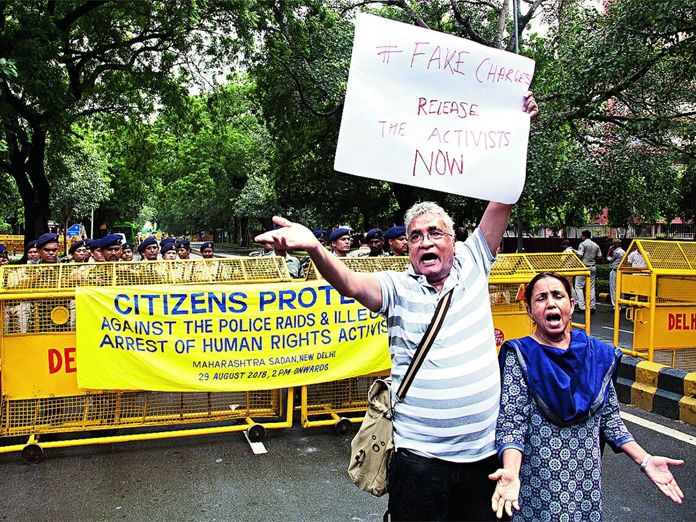 On September 28, 2018 Justice D Y Chandrachud delivered an incisively argued dissenting judgment in the case of the five activists accused of...

On September 28, 2018 Justice D Y Chandrachud delivered an incisively argued dissenting judgment in the case of the five activists accused of instigating violence at Bhima-Koregaon. The majority judgment, on the other hand, did not address any of the specific issues raised in the arguments before the court about the nature of evidence and the context of the case, leaving the hopes of these five activists along with thousands of other undertrials who are arrested under draconian laws on flimsy evidence in suspended animation.

Do the Unlawful Activities Prevention Act (UAPA) by the Centre and the public security Acts in many States help India in preventing threats to public security? Who is this public whose security is being ensured? Which public is being deprived of their basic liberties in the process?

Earlier, the brunt of police attention was being born by the poor Dalits, Adivasis and the working class. Now the attempt is to disable the lawyers and public intellectuals from speaking up for the poor by framing them with serious allegations.

As thought leaders, these men and women have provided both courage and coherence to the fight for rights. Eerily, Gautam Navlakha has been campaigning for the repeal of the UAPA and other public security acts, under which he himself is now sought to be arrested.

The activists have been arrested ostensibly based on the information found in the hard discs confiscated from them and their emails. While the State agencies claim high-tech capabilities for surveillance, somehow it takes both the investigating agencies and the courts months, if not years just to establish the veracity of the email letters.

Meanwhile, through systematic leaks of unverified information to the media, the individuals are tried for plotting assassinations of senior politicians and convicted in politically fraught media debates. Justice Chandrachud’s dissenting judgment considers the police tactics in this case grounds enough for instituting a court monitored SIT.

In 2002, The Minority Report, a film made by Stephen Spielberg based on a short story by Philip Dick was released. A complex film, it foreshadowed the technological dystopia we are heading towards. “We’re giving up some of our freedom so that the government can protect us,” Spielberg told Channel 5 News at the premiere of the film. The film gives us a glimpse of the media saturated world, and the pervasive iris scanning that strips individuals of all privacy too.

Briefly, the story revolves around a crime prevention programme (pre-crime), which uses the visions (precognitions) of a group of mutated individuals (precogs) who float in protein liquid and seem to accurately predict the names of the future criminals, the time, and location of the crime.

The objective of the crime prevention programme is to detain those who are predicted to commit a crime and to disable them in a frozen state, therefore achieving a zero crime-rate. The film takes us through a complex narrative to explore whether by knowing in advance what crime is likely to occur, can a human being change the course of his/her actions? Are our actions predestined, predictable and irreversible, or can we act differently through our free will?

The film is situated in a futuristic, technological police state that uses iris scans and mini-robots to track everyone. In this process, based on the visions of the precogs, the police arrest and put away people for future crimes that they may not even have thought of yet. It is only when the precogs predict the murder that a police officer himself (the hero of the film) is going to commit, that the idea of determinism begins to unravel. It unravels to reveal how a cabal builds this elaborate high-tech crime detection charade to capture the system.

While the causes for the visions of the precogs seem arbitrary and unpredictable, the visions of our “intelligence” agencies clearly are driven by the corporate-politician nexus that has been trying to dilute the existing protective legislation meant for SCs and STs to take away their lands and to displace the poor in the name of development and gentrification of urban spaces.

On the contrary, we are only too familiar with the investigation and prosecution of mob lynching cases and assassinations of rationalists where the same high-tech surveillance state appears clueless.

The central idea in the storyline of The Minority Report is one of free will versus determinism. The Supreme Court of India, rejecting simplistic determinism, has time and again passed judgements saying possession of literature, or membership in a banned organisation is not in itself a crime, till the individual directly participates in a crime.

If we claim to be a democracy, can we allow people to be picked up and detained when no crime has been committed, in the name of public security? The judiciary, for their own credibility, must call out such strategies of harassment by the law enforcement machinery. The minority judgment flags this. And if we believe in the Constitutional value of equality before law, why are some crimes that have already resulted in loss of life and property not punished with equal enthusiasm?

The activists facing the force of law have not committed any crimes, unless decades of public service in law, literature and academia have become crimes for the Big Brother State. In The Minority Report, it is the minority prediction of a single precog, who sometimes has an alternative vision, that leads to the truth. Dissent is critical for realising justice. The laws like the UAPA and the public security acts that facilitate arbitrary exercise of power, enable systematic subversion of justice, criminalise dissent, should have no place in a democracy.