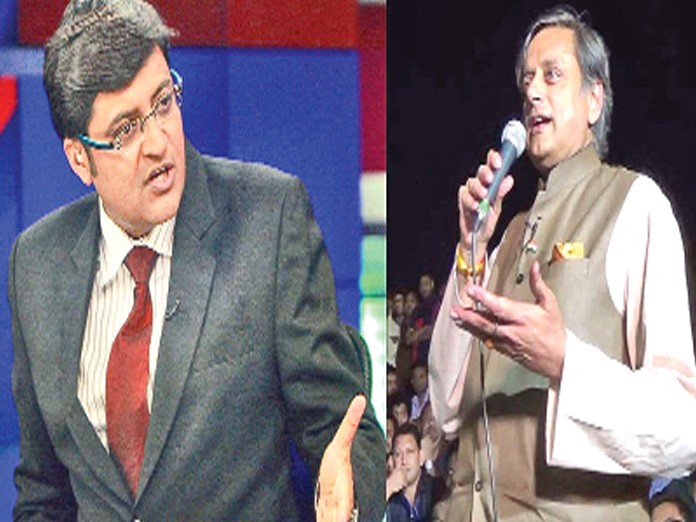 Several journalists are fearing that the case filed by Shashi Tharoor against Arnab Goswami and Republic TV will set a precedent for attacks against free speech.

I would argue that the case in fact is a window of opportunity to clean up the media that has gone rogue. Tharoor is alleging, among other things, that Republic TV caused breach of privacy by hacking into his emails. The petition also alleges that the channel showed investigative material in a sub judice case obtained unlawfully.

India has afforded wide latitude to the free speech rights of big media houses, while individuals are left to fend for themselves when their life and liberty are put at risk by media.

There have been several instances of the major channels indulging in malicious propaganda based on false information. The two recent instances being the doctored videos used to malign JNU students as anti-nationals that led to the young men and women named on the channels being hounded and viciously attacked online and in real life.

The second that of the activists arrested in Bhima-Koregaon case based on dubious documents leaked selectively to compliant media houses by the Maharashtra police. The activists have been incarcerated for several months in different jails without bail, charged under the UAPA.

These instances of “journalistic” overreach by some media houses bring to mind Rupert Murdoch’s News of the World fiasco. Murdoch’s News International played havoc with British civic life through their “newspapers.” They were serial offenders who built up a history of large pay-outs in defamation cases, out-of-court settlements. The source of their impunity was the nexus with the entire ruling establishment.

In 2011 journalists of The Guardian began to follow up on the stories of how News of the World broke a host of laws – unlawfully hacking emails, bribing the senior police officers of the Metropolitan Police Service, persuading the courts and regulators to ignore violations, to name a few. The exposés of The Guardian led to three journalists and three senior management executives of News of the World going to prison.

Murdoch and his son themselves had to step aside and face the Leveson inquiry that held public hearings on the toxic nexus between media, the police and the politicians. The 168-year-old News of the World had to shut down.

It was catharsis for the British media. Many journalists with conscience deposed in detail about the impunity with which laws were broken. However, the real take-away from the entire disaster was the stellar role played by media houses like The Guardian that cared about civic decency, and journalistic values.

In this instance of the Republic TV being hauled into court, one hears several murmurs from the journalistic fraternity about danger to free speech.

The danger to free speech occurs when the accountability process is absent, arbitrary, or selectively invoked by state agencies. Cases seeking legal redress for criminal breach of personal privacy need not be confused with the criminal and civil defamation debate. Neither should it be misconstrued as a threat to the journalists’ right to aggressively pursue and obtain information that’s with public authorities through anonymous sources in public interest. Individuals must have the freedom to seek redress from a court of law.

In India, media self-regulation has failed miserably. Out of some 403 news channels, barely fifty are members of the News Broadcasting Standards Authority (NBSA), covered by its code of ethics. It is common for channels found guilty by NBSA to either refuse to comply with the redress ordered by the NBSA to the victims, or just walk out of the NBSA altogether.

The only recourse left to the individual victims of media overreach are the courts. In this instance, it happens to be Tharoor, a powerful, high-profile politician. Victims like the students of JNU could not do anything to push back against the campaigns of calumny conducted by the media houses, that put their lives in serious danger.

The same Arnab Goswami was working for Times Now in 2011. In October 2011, Prashant Bhushan was attacked in his chambers. Times Now was the only channel present there and had exclusive footage.

Nupur Basu wrote a critical piece titled “Anger on the air waves, attacks on the ground” on thehoot.org, a media-watch website, for which Times Global Broadcasting Company Limited, the owners of Times Now sent a legal notice to thehoot.org claiming that the piece was defamatory.

Accusing the media-watch website, whose mandate it was to critique unethical practices in media, of “malicious intent”, the notice said, “Under the garb of providing a platform for freedom of expression, you have permitted the publication of such a highly disparaging article that not only reduces our esteem in the eyes of our viewers but also casts baseless aspersions on our credibility as a news broadcaster and thereby seriously damaging and diluting the goodwill and image we have built over the years...

While we are certain that you are fully entitled to write or publish any article on the subject of media and its role, this freedom does not clothe you with the right to publish defamatory, disparaging or demeaning remarks against TIMES NOW or any of its representatives (emphasis mine).”

Whether it is Times Now, Republic TV, or one of the many other channels, why are only their reputations seriously damaged after being built over the years and not those of JNU, or Shashi Tharoor? Is it kosher to continue to call young PhD scholars Tukde Tukde gang based on doctored videos, declare Tharoor a murderer repeatedly even as the case is sub judice?

In another instance when Justice Sawant, former Chairman of Press Council of India, filed a 200-crore defamation case against Times Now for misrepresentation, the Editors’ Guild jumped in to say:
"While recognising that the law of defamation is an important qualification of the fundamental right to freedom of expression, the Guild believes that the law of defamation has to be construed in such a manner that it does not constrain the normal functioning of the media".

It added, "An unintentional error because of a technical mix-up is in a different category from malicious or intentional libel." Justice Sawant is still being hounded by the same players in Bhima-Koregaon case. The Editors’ Guild is silent.

Neither does the Editors’ Guild tell us what individuals can do when the media’s “error” is not inadvertent but deliberate with intent to malign. This is a question that needs resolution in public interest.

A large corporate media house plays havoc with the lives of individuals, but it is the corporate house that has the right to free speech. Our Constitution bestows free speech as a fundamental right on the citizens. The right of media houses is a derived right. Since the right is justiciable for the individual, the right to go to court is available.

When corporate muscle is pitted against the individuals’ fundamental rights, it is up to the courts to decide whether they choose to protect the fundamental rights of individuals or the derived right of the corporate entities. Arnab Goswami just declared that he would fight the case in the court. He should. May the best side win.