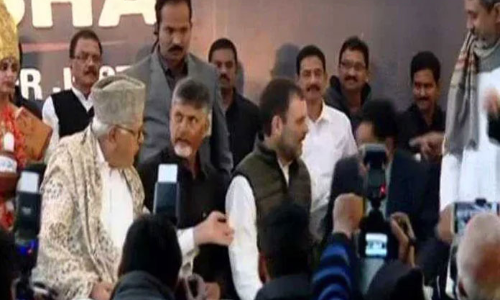 For the last few months in Andhra Pradesh, a series of meetings are being organised by the government in the name of Dharma Porata Deeksha at state expense The purpose of these meetings ostensibly is to highlight certain nonfulfilment of promises by government of India as perceived by the state government and implementation of the Special Category Status The finale to these series of meetings w

For the last few months in Andhra Pradesh, a series of meetings are being organised by the government in the name of Dharma Porata Deeksha at state expense. The purpose of these meetings ostensibly is to highlight certain non-fulfilment of promises by government of India as perceived by the state government and implementation of the Special Category Status. The finale to these series of meetings was held at New Delhi recently and one more I believe is to follow at Amaravati.

Since this extravaganza is being organised at the taxpayer’s cost, the public is justified in questioning what is the purpose they are supposed to achieve and whether it is appropriate to spend public money on such a political jamboree.The cost estimates for the Dharma Porata Deeksha differ depending on what is construed to be part of the cost and what is not considered part of the cost. For the Delhi Deeksha government issued GO 262 specifically paying an amount of Rs.1.12 crore to the Railways for arranging special trains from different parts of the state to Delhi.

Another GO 215 was issued sanctioning Rs 10 crore for the one-day Delhi Dharma Porata Deeksha. Some estimate the total cost for Delhi meet is around Rs 20 crore but definitely the cost will be far more than what is indicated in the above government orders since in any said event there will be lots of hidden costs met by the respective government departments without getting reflected at one place as the cost for this particular event. On the issue of cost of this meeting being met by government the chief minister of Andhra Pradesh did not have an answer except to question back citing such expenses in a different context in a different state when the present Prime Minister was the Chief Minister.

A counter question does not answer the issue nor legitimise the expenses.Regarding the composition of the delegation which was part of the Delhi meeting a peculiarity which is now common to both the states of Andhra Pradesh and Telangana is to be noticed . Employees associations were very active both in the Telangana agitation as well as in the counter Samaikya Andhra agitation in Seemandhra area . No wonder in both the states governments keep on cultivating and engaging the employees associations and their leaders for its political agenda.

All the important employees’ association leaders were present on the dais at Delhi as part of the Dharma Porata Deeksha. Some activists who are getting involved in these issues with full support and backing from the government from behind could also be seen on the dais . Senior ministers in Chandrababu Naidu cabinet for reasons unknown were not present in the meeting. Conspicuous by their absence were all the opposition leaders of Andhra Pradesh who are also claiming that their agenda is also Special Category Status to the state.

The fact that all the opposition leaders from the state decided not to join the Dharma Porata Deeksha shows that except his own party no one else is with Mr Naidu in in this activity. That’s because he and his party have taken inconsistent stand on all these issues in the last five years sometimes praising the central government for having given special package in place of Special Category status and passing a resolution in the assembly thanking the government of India for the same and suddenly now taking a U-turn and demanding special category status and expecting all other opposition to join him in this fight. With none of them joining him the Deeksha essentially lost its significance.

All the opposition parties at the national level did come and participate in the Deeksha but no one promised or made a commitment that they are with the state of Andhra Pradesh in their demand for special category status with industrial incentives. Most of the leaders including Rahul Gandhi very cleverly are promising Special Category Status fully aware that the status by itself does not include industrial incentives and without industrial incentives it is equal to special package no more no less.

So in the end what did these Deekshas more particularly the extravagant one organised in New Delhi achieve ? Except using this as a platform for the national level opposition parties to come together to indulge in the bashing of the central government no specific purpose has been achieved. This essentially was a platform created by the chief minister of Andhra Pradesh for all opposition parties to take on the BJP government knowing fully well that this Deeksha will not serve any other purpose than that.

Should tax payer’s money be used for such purposes ? Mr. Naidu is able to get away with such actions in the absence of a strong civil society to question him and a vernacular media which for reasons well-known has decided to back him on all these issues.To me Delhi Dharma Porata Deeksha looked like a Kaurava Sabha at Hastinapur which divided the state of Andhra Pradesh. Then prime minister who played the role of Dhritarashtra at the time of the division of the state was very much there. Shakuni who drafted the AP State division bill could also be seen.

Conspicuous by her absence was the lady Duryodhana. Lakshmana Kumar came to the meeting and went back. It was in fact not so much a Dharma Porata Deeksha but a meeting of all those who played a very important role in dividing the state of Andhra Pradesh meeting again to rekindle the division wounds in the minds of people of Andhra Pradesh.
( The author is a BJP leader)