Pulwama attack: Time to get the messaging right 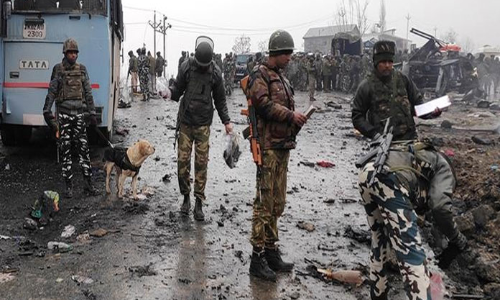 Suicide attacks are one of the most potent and effective options available to terrorists1 They have been used with telling effect in conflict torn areas like Iraq, Syria and Afghanistan The frequency of suicide attacks in India has been lower However, whenever this option has been employed by Pakistani terrorist groups in the last few years, the security forces have invariably been the target2

Suicide attacks are one of the most potent and effective options available to terrorists.1 They have been used with telling effect in conflict torn areas like Iraq, Syria and Afghanistan. The frequency of suicide attacks in India has been lower. However, whenever this option has been employed by Pakistani terrorist groups in the last few years, the security forces have invariably been the target.2The February 14 attack on the Central Reserve Police Force (CRPF) convoy moving from Jammu to Srinagar, near Awantipura, Pulwama, should be seen in this context.

There is a distinct similarity in the response to such attacks from the Indian state and civil society. The immediate aftermath of such attacks is marked by an inadvertent misrepresentation of the source of terrorist attacks. The attack itself is often described in a way that reinforces the message that terror groups seek to convey. Public debates tend to demand extreme military and diplomatic measures, irrespective of whether these can be realistically executed. There is also an upsurge in articulation of popular support for the security forces, often with a limited shelf-life.

These limitations adversely affect the messaging that emanates after each major attack, thus weakening the intended impact of India’s response. The criticality of ensuring coherence in India’s strategic communications relates to the nature of challenge faced by the country and its evolving character over the years.India has lost more security forces personnel in Jammu and Kashmir over the last three decades than in any single war fought against adversaries.

What is being witnessed in that state and in some other parts of the country is not the handiwork of a few disgruntled youth. On the contrary, it is a protracted, well-planned, and coordinated hybrid war waged by the Pakistan Army. Unlike conventional wars of the kind fought in 1971 or even in 1999, the prolonged character of hybrid conflicts induces a sense of complacency.

Once such conflicts achieve a degree of normality, it becomes business as usual. While the security forces continue with the tough job of a 24 by 7 vigil, strategic communications to build the Indian narrative and counter that of Pakistan tends to become diffuse and at times even counterproductive.

There are five key elements in strategic communications that we need to focus on:

First: These are not “fidayeen” but hashishin suicide attackers.
Suicide attackers are often inappropriately termed as “fidayeen”. 3 This term has been in wide circulation despite the fact that it unwittingly repeats the narrative of the terrorists. To elaborate: The term “fidayeen” is used to make a contrived association between terrorist actions and service to God. This association is all the more important for the terrorists’ strategic messaging since suicide is considered a sin in Islam.

In order to obviate this negative religious connotation, Hassan-i-Sabbah, a 11th century missionary based in the mountainous region of Alborz, termed his suicide attackers as “fidayeen”, thereby attempting to give his killers a degree of religious acceptability. However, in reality, their action of assassinating targets was undertaken in a drug induced state.

This practice continues to manifest itself in Jammu and Kashmir.4 Not only do some suicide attackers act under the influence of drugs, the funding that supports their organisational network, training, weapons procurement, and remuneration for their families, are all sourced in part from the drug trade.5 Therefore, for a terrorist network which operates with the support of the drug trade and suicide attackers who act under the influence of drugs, there is no better description than hashishin.

Second: Pulwama is the handiwork of Pakistan Army and not Jaish-e-Mohammed
There must be no doubts about the ultimate source of the Pulwama terrorist attack in particular and terrorism in general. It lies in Pakistan. The attack at Pulwama is not the brainchild of Masood Azhar, his nephew, or their ilk. The JeM only carried out this strike. Groups like the Lashkar-e-Taiba (LeT) and JeM have become the sword arm of the Pakistan Army, and are employed as part of the latter’s hybrid war against India.

By laying the blame at the doorstep of JeM in this case or of the LeT in others, we are only diluting the responsibility of the actual perpetrator of terrorism. Pakistan has realised that conventional military options of the kind employed in 1965, 1971 and 1999 have become part of a redundant toolset and that the best approach to adopt towards India is the employment of terrorism in conjunction with other elements. These other elements include firing along the Line of Control (LoC), subversion of Kashmir’s population, and pumping fake currency notes into India. Thus, what we are witnessing in J&K and other parts of India is a form of hybrid war.6

(Col Vivek Chadha (Retd) is a Research Fellow at the Institute for Defence Studies and Analyses (IDSA), New Delhi. This article was published by IDSA. Views expressed are of the author and do not necessarily reflect the views of the IDSA or of the Government of India )