Congress dilemma: Neither alone nor in coalition 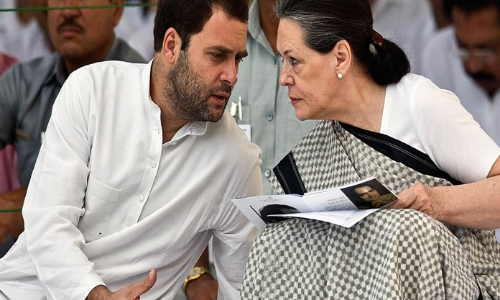 By announcing her own candidature from Rae Bareli, has Sonia Gandhi grounded Priyanka Gandhi quite as abruptly as she had taken off Or, is it a...

By announcing her own candidature from Rae Bareli, has Sonia Gandhi grounded Priyanka Gandhi quite as abruptly as she had taken off? Or, is it a function of post Pulwama demoralisation that is causing the leadership to scale down aspirations? Is the Robert Vadra investigation beginning to tell?

Pulwama or no Pulwama, my impression is that the Congress was never in the fight full throttle. Basically, the Congress is all at sea, balancing its self-interest against the larger interest - that of the coalition and the nation.The Congress president is failing Guru Dronacharya's fish eye test.

Unlike Arjuna who focused on the fish eye, Rahul is scattering his vision. He is not focusing on the only target the coalition had set for itself - the removal of Narendra Modi. Rahul's cohorts have burdened him with the task of ensuring Congress gains while waging battle with the coalition against Modi. Sonia Gandhi and Priyanka are even more direct: they would go flat out if, at the end of the day, the Prime Ministerial crown were Rahul's and not someone else's.

Coalition partners would exert every muscle in the regions of their strength for a unified game plan. But they will not buy into any guarantees for the Congress. Balance of forces, after votes have been counted, must determine the next phase. Surely, Congress numbers will matter. But bereft of a coherent leadership, the party is creating confusion by pulling its horses in Uttar Pradesh, Delhi and West Bengal.

It is not focused on the eye of the fish; it is contemplating its navel.Rahul has been as aggressive as he can be on Rafael and “chowkidar chor hai”, the watchman (Modi) is a thief, and so on! But he would be out of character to take on Modi's gangster vocabulary, snarling at Pakistan to summon up the nation's blood.

Mamata Banerjee, unlike Rahul, can be a street fighter, a fiery Durga when required. She raised issues of security lapse at Pulwama. How did hundreds of kg of RDX reach a misguided 20-year-old in a State saturated with surveillance? Above all, the lies about numbers killed at Balakot. The world media, taken to the spot, has reported zero casualties.

Last week party enthusiasts were putting together a meeting at Delhi's Ram Lila Maidan where all the coalition leaders will raise the issues Mamata has been dwelling on. The platform might provide Priyanka another occasion to jump-start her campaign. Someone at the meeting produced a Washington Post headline: “After Pulwama, The Indian Media Proves It Is The BJP's Propaganda Machine”. This prompted another suggestion: which party is capable of mobilising "Demonstrations for Truth" outside media establishments?

By a singular lack of leadership, is Rahul helping Narendra Modi once again? The State units of the Congress are being allowed to get away with their caprice, provided they throw a ginger fit. Exactly as Sheila Dikshit has done in Delhi.In Congress culture, regional leaders were always cut down to size.

Is Sheila Dikshit in the process of reversing the trend? Is she cutting the leadership down to size? The Congress will come third in all seven seats, if that indeed is what she wants in Delhi. Is she piqued that AAP has fielded its strongest candidate, Atishi, the education whiz kid, from East Delhi which Sheila's son, Sandeep Dikshit, had been salivating on?

Since it is universally accepted by folks in the Congress that results in Delhi are not likely to flatter, why is this adventure being permitted? Because Dikshit has been able to persuade Sonia Gandhi, Rahul and Priyanka that for the party to "revive" it cannot afford to be a cypher in the capital city? In brief, defeating Narendra Modi has been deprioritized.

Not for the first time, the Congress is thinking "long term", exactly as it thought in 2013-14. In April 2013, Rahul told the Confederation of Indian Industry that he would first build grassroots democracy in the party. Remember, Election Commissioner K J Rao was brought in to set up a system of primaries?

The muddled thinking on show today was available then too. The then party general secretary, Janardan Dwivedi, volunteered the thought just before the 2014 elections that the Congress should have occupied the opposition benches after the 2009 elections. What kind of thinking did the statement represent? Since 1991, the Congress had never won more seats than the 209 seats it won in 2009.

Why should it then have sat on Opposition benches? Because the party had not won an absolute majority. Dwivedi was trying to place a premium on "ahuti" (sacrifice) which he persuaded Rahul was the trick for absolute majority.In other words, had the Congress shunned power because it was short of numbers, the electorate would have rewarded the party with an absolute majority in 2014. Full marks for Dwivedi's electoral anticipation.

The Congress won 44 seats, a tally so low that it would require courage of a very high order to even dream of meaningful revival. At the moment the Congress is neither ekla-chalo, nor whole heartedly in the coalition, but in between, clearly not the posture of potential victors. If in Delhi it was Sheila Dikshit's soaring vision to be accommodated, in Kolkata, CPI-M General Secretary Sitaram Yechury's yen to rediscover Jyoti Basu's golden period for the Left is being indulged.

Mamata Banerjee, focused on the fish-eye, has been quite sporting about the combine. By remaining in play, the Congress may cushion some anti-incumbency vote which may have drifted towards the BJP. She is politically sound.

The Congress understanding of Mayawati in Uttar Pradesh deserves to be spelt out. “With the Enforcement Directorate constantly hovering over her, there is no certainty on her future behaviour.”By placing its money both ways in three States, the Congress may well have forfeited some of its claim, should the cookie crumble the coalition's way after the vote is counted.

(The writer is s senior commentator on political and diplomatic affairs. The views expressed are personal.)