Ethics of the Holy Bible 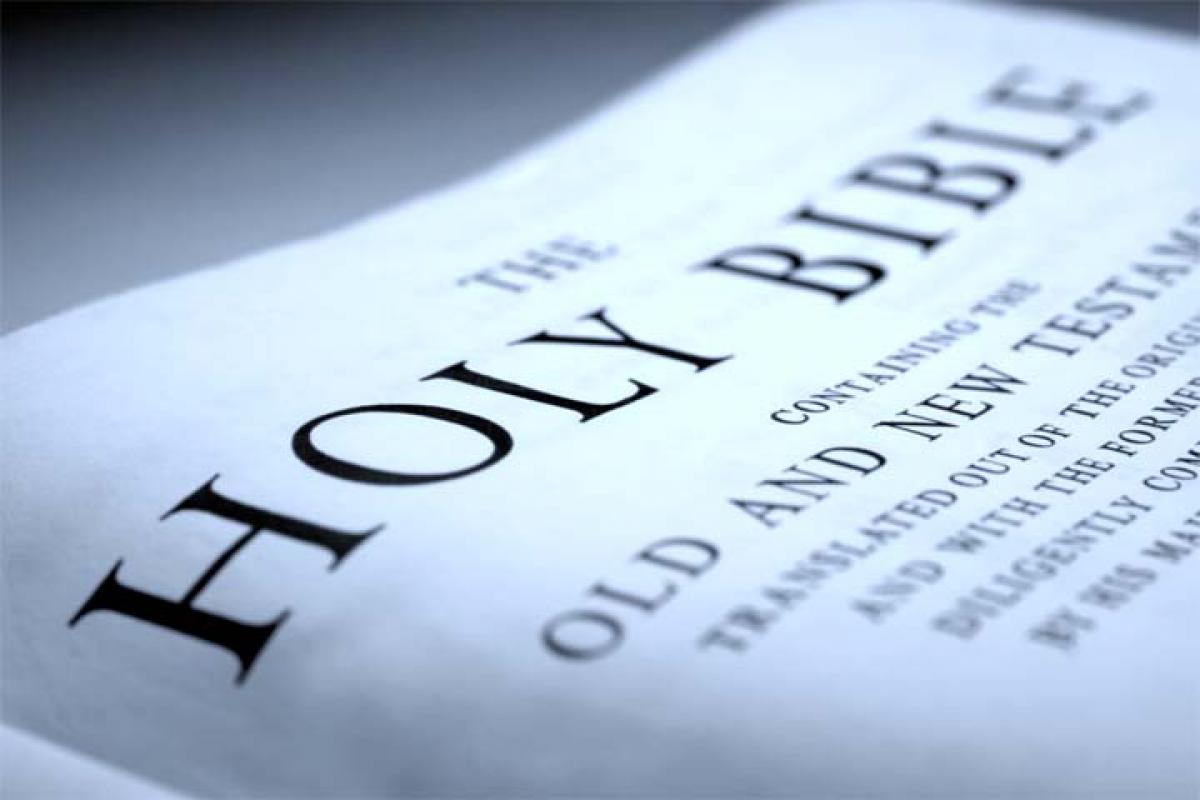 Despite the invaluable contribution of speculative philosophers, the fundamental standards of ethics (truth and duty) are found in The Holy Bible. It is a unversally well known fact that truth is to be sought in The Holy Bible.

The law of the Old Testament was the ethical basis of the New Testament. The New Testament aims at acquainting man with the moral codes. Ethics of the Bible can be simply understood as the teachings of Jesus Christ concerning conscience and duty of man.

The ancient thinkers regarded moral ideas as distinctly religious and as emanating from God. Moral law is the revelation of the divine will. Israel regarded duty to man as duty to God. The Ten Commandments, ten distinct moral enactments in the Old Testament stand first among the ethics of the Bible, which have a supreme and formative place in the moral teachings of the Holy Bible. The “Precepts of the Holy Bible can never become obsolete because they are the expression of the divine character of the Divine Author” and hence they are applicable to the whole mankind at all times.

While the Civil Laws of the Hebrews are embodied in Exodus (Chapters 20-23), the provisions of a kindlier nature like the law of release, the protection of the fugitive, the mercy to be shown towards the slaves, and other humane obligations like generosity to the gleaner etc. are summed up in Psalms (Chapters 15 and 24). The Book of Leviticus contains moral elements of the highest value. The oft-referred to mandate of the Book of Leviticus is “ye shall be holy, as I Jehovah your God am holy”.

The prophets played not only preachers but also philosophers who directed people’s minds to the spiritual side of life to the exclusion of worldliness and materialism. The highest water mark of ethical teaching of the Bible is touched in Micah when he says: “He hath shewed thee, O man, what is good; and what doeth the Lord require of thee, but to do justly, and to love mercy, and to walk humbly with thy God.” (Micah 6:8).

Psalms represents the character of God as the moral ideal of man and of love for the good. The Psalms echo a spirit of holy and thoughtful devotion. The maxims in the “Book of Proverbs” are expressions of ordinary prudence rather than speculations to moral problems. According to Proverbs (1:7) “the fear of the Lord is the beginning of wisdom.” That is why the wise man leads his life according to the laws of God, while the fool is described as a self-willed man who fails of success as he lacks principles. A morally perfect man is one who is correct in his attitude both to God and to hisfellow men. Such a perfect man retains his integrity, faith in and noble attitude to God even while passing through several trivialities and tribulations in life.

This fact is clearly exemplified through the character of Job in the “Book of Job,” which is the climax of the Old Testament, in which the author emphasizes the educational value of suffering. God makes good men suffer in order to discipline them and their suffering is for the welfare of others.

In the New Testament, Jesus Christ conserved and systematised all the eternal teachings in the psychological idiom of the age, thus giving them a new life. The divine redemptive measures are required in order to destroy the moral ravages in man and the society so that the sinners will not be lost. The New Testament maintains that a good life can be lived through renouncing sin by a penitent heart. According to the New Testament the whole universe is good since the universe is the Creation of God (John 1:1); sin is wilful misuse of the things which are naturally good. Hence cleansing is necessary. This can be affected only through Christ: “I came not to call the righteous, but sinners to repentance”. (Mark 2:17).

The sacrifice of Christ, which was a sacrifice of propitiation, removed all the barriers between man and God, and by it reconciliation is made effectual to man “Whom God hath set forth to be a propitiation through faith in his blood, to declare his righteousness for the remission of sins that are past, through the forbearance of God.” (Romans 3:25). The New Testament holds that the true basis of morality is theology, or in other words, moral life depends upon the acts and nature of Christ. The New Testament also emphasizes the social aspects of morality apart from the individual aspects of it. “For everyman shall bear his own burden.” (Galatians 6:5).

Faith, hope and love are the cardinal virtues, as emphasized by the New Testament. “And nowabidteth faith, hope, charity, these three; but the greatest of these is charity” (1Corinthians 13:13) since “though I have all faith, so that I could remove mountains, and have not charity, I am nothing.” (1Corinthians 13:2). This point is equally emphasized in 1 Peter thus:

The Hebrews stresses these virtues thus: “Let us draw near with a true heart in full assurance of faith, having our hearts sprinkled from an evil conscience, and our bodies washed with pure water.” (Hebrews 10:22). The implied idea in all these sayings of Prophets is that man should have faith resting upon Christ; man’s hope centred in God’s consummated world plan through Christ; and love should be directed to the God who gave, and the Son, who affected redemption.

The virtues of hope, faith and love presuppose the cessation of all feelings of hostility and estrangement between man and God, and between man and man. One cannot profess love to God without loving his fellowmen.

Jesus Christ has enunciated certain great moral truths or virtues which Jesus made His own, lived them and even died for them which are a true estimate of His invaluable contribution to the ethics of the world.

The conception of Jesus about man’s relation to God is an ethical one and He maintains that “it is the evil will, the impure heart and the false nature that separates men from God.” The idea of Jesus is to create an ethical standard by His character and personality. Ethics cannot be dissociated from religion, since religion is to lead the life according to certain established ethics. That is why Jesus bound moral and religious principles together.

The Holy Bible has universal appeal and aims at unification of mankind and shows us the path to the divine. One cannot reach the divine except through cherishing the highest ethical and human values. “The highest knowledge,” said Socrates,”is our knowledge of good and evil-the knowledge of the wisdom of life.”

Recitation of god’s name is considered as the most potent means of salvation. That is why the Holy Bible says, “Praise the Lord.” St. Ignatius Loyola expresses his ideas about education in which he agrees to take an explicit vow of obedience to the Pope; to take sufficient time to teach the ‘Ten Commandments’ in an orderly way. Likewise it is essential to teach the pupils in the early days itself the Sermon on the Mount so that each pupil in his early years cultivates the qualities which, according to the Holy Bible, are highly noble and ethical. The message of the Holy Bible is Pan Sophia. Universal happiness is possible only through universal love and universal wisdom which are developed through cherishing the highest ethical values.

We would adhere to the Biblical ethics by understanding the moral wisdom embedded in the tradition of the Church, our obligation to love God with our minds, and the guidance of the Holy Spirit to whom Jesus Christ promised to send His followers to lead them into all truth (John 16:7-13).

The ‘Ten Commandments’ (Exodus 20:1-17 and James 13:9) prohibit unworthy use of the divine name, specify the Sabbath as day of rest, insist on respect for parents, prohibit killing, adultery, stealing and covetous attitude. The Holy Bible prohibits all abominable customs (Leviticus 18:22), condemns unethical business practices (Amos 5-12) and stresses in clear terms to “seek good, and not evil, that ye may live; and so the Lord, the God of hosts, shall be with you, as ye have spoken.” (Amos 5:12).

Man need not go with religious formalism, nor perform rituals but should not neglect social justice. God’s concern for the poor is underlined thus:

“The Lord will enter into judgment with the ancients of his people, and the princes thereof; for ye have eaten up the vineyard; the spoil of the poor is in your houses” (Isaiah 3:14)

The virtues of truthfulness, hard work, etc. are held up for emulation in Proverbs and Psalms:

“…thou mayst walk in the way of good men, and keep the paths of the righteous.” (Proverbs 2:20)

“But the wicked shall be cut off from the earth, and the transgressors shall be rooted out of it.” (Proverbs 2:22)

‘James’ is regarded as a New Testament wisdom book while ‘1Corinthians 13’ is a major contribution to spirituality and ethics with emphasis on charity. The virtues specified in Galatians (5:22-23), Philippians (4:8) serve as principles of ideal human conduct. According to Galatians “the fruit of the Spirit is love, joy, peace, long suffering, gentleness, goodness, faith, meekness, temperance: against such there is no law.”