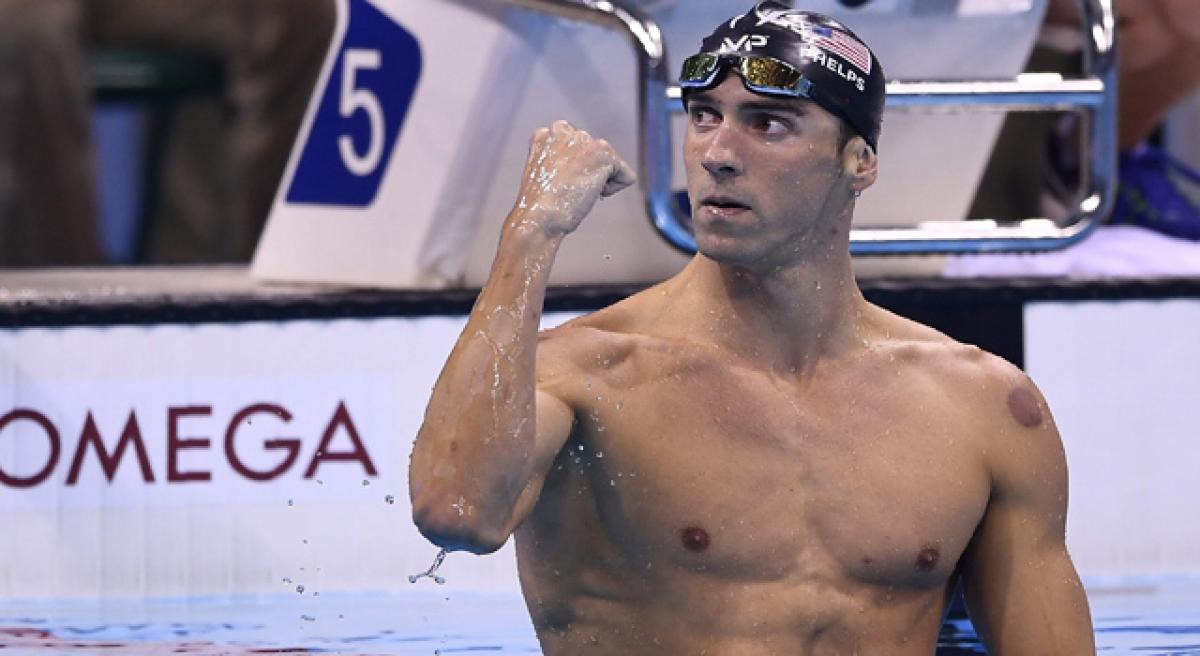 Michael Phelps captured his 20th Olympic gold medal in devastating fashion, sealing victory with a kiss, before adding a staggering 21st before the night was over.

​Rio De Janeiro: Michael Phelps captured his 20th Olympic gold medal in devastating fashion, sealing victory with a kiss, before adding a staggering 21st before the night was over.

The American crushed rival Chad le Clos to regain his 200 metres butterfly title, celebrating victory in a race bristling with tension by pointing to the sky and gesturing to the Rio crowd to ‘bring the noise’ -- an order they duly obeyed.

Katinka Hosszu and Katie Ledecky struck further blows for girl power, but again it was all about Phelps, who later anchored the American 4x200 freestyle relay team to gold as the clock edged toward midnight local time.

Milking the acclaim of the Brazilian crowd, Phelps climbed past the massed bank of poolside photographers to kiss fiancee Nicole and baby Boomer after an emotional medals ceremony.

Entering the arena like a gladiator, his face a granite mask of concentration, Phelps dominated a grudge final le Clos had billed as ‘Ali versus Frazier’ to become the oldest individual swimming gold medallist in Olympic history at 31.

South African Le Clos, who won by a fingertip four years ago in London to rob the American of a hat-trick of titles, faded badly down the stretch to finish out of the medals.

World record holder Phelps, the most decorated athlete in Olympic history, clocked 1min 53.36sec to add to his staggering title tally as Japan's Masato Sakai came through for a surprise silver in 1:53.40. Hungary's Tamas Kenderesi took bronze in 1:53.62.

Competing in his fifth and final Olympics, victory was twice as sweet for Phelps after clashing with le Clos in the media since losing to the South African in their epic tussle in London.

Phelps won his 19th Olympic gold in the men's 4x100m freestyle relay at the weekend and if he feels greedy, there is more potential gold for him in the 100m fly and the 200m individual medley -- events he has incredibly won at the past three Olympics.