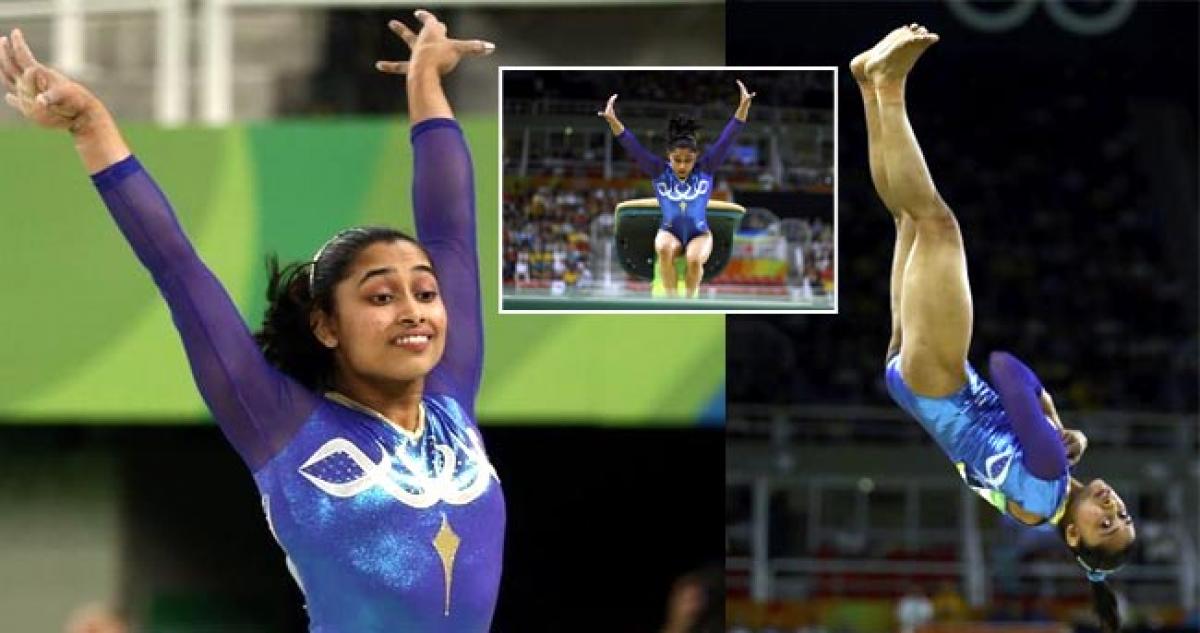 With no more tears left to shed, a distraught Dipa Karmakar now wants to get back into training so she can start working towards leaving a lasting legacy in gymnastics.

With no more tears left to shed, a distraught Dipa Karmakar now wants to get back into training so she can start working towards leaving a lasting legacy in gymnastics.

While the memory of losing an Olympic medal by just 0.15 of a point in Sunday's vault final continues to haunt her, the 23-year-old knows what she achieved in Rio could be the start of something big for Indian gymnastics.

"I want to inspire the next generation so that in 10 to 15 years, India can send a full gymnastics team to an Olympics and not just one athlete," Karmakar told Reuters in an interview in her native Bengali in the athletes' village before heading home to India on Thursday.

"(Five-times Olympic champion) Nellie Kim told me that in 10 years' time, Indian gymnastics will be at the same level as the Chinese team."

If that happens, it will be because of the barriers Karmakar and her coach Bishweshwar Nandi have broken down over the past decade.

When the duo embarked on their dream to make Karmakar a world-class gymnast, they had no funding, no equipment and no guidance. All they had was a determination to succeed and a brainwave to build makeshift apparatus from a pile of crash mats and discarded parts of a second-hand scooter.

Such hardships will be totally alien to the three gymnasts who finished ahead of Karmakar in Rio - Simone Biles, Maria Paseka and Giulia Steingruber - but it is thanks to the Indian trailblazer that future generations will have an easier start to their careers.

"Up until three months ago I was using out-of-date equipment. Even now we still do not have the Olympic standard balance beam and uneven bars in India," explained Karmakar, who was one of only two competitors in Rio to attempt the high-risk Produnova vault.

"But I am now hopeful those will be imported into India."

Just how oblivious Indians are about gymnastics was clear on Sunday when a throng of reporters bombarded Karmakar with questions such as:

"Couldn’t you have done the landing better?"

"Is this your highest mark?"

"Does anyone else attempt this vault?"

"Someone even asked me‘why didn’t you do the Produnova twice? If you did it twice, you would have got the medal!’" Karmakar, who got a career-best of 15.266 for the vault, said rolling her eyes.

"That’s when I realised how ignorant some people still are about gymnastics. I had to explain to them that the rules state I have to perform two completely different vaults, one going forward and one going backwards."

The Produnova - consisting of a front handspring and two front somersaults - is so difficult that even its inventor, Elena Produnova, landed it standing up just once in her career.

All her subsequent attempts resembled Karmakar's effort, with Produnova's bottom touching the mat before she bounced back onto her feet.

In Rio, Uzbekistan's Oksana Chusovitina also tried out the skill known as the "vault of death" but ended up doing a forward roll on the crash mat to finish seventh.

"The one thing I do know is that everyone now knows the Produnova vault. I have probably made it more famous than Elena Produnova ever did!" Karmakar said with a laugh.

"I have yet to reach my target with the Produnova as I am determined to stand up straight on my feet from this vault."

So does she have any aspirations to invent a vault herself?

"Every gymnast wants to invent a skill that will bear their name so that they leave behind a lasting legacy. I too have that dream," said Karmakar.

While working towards that goal cannot begin until she is back in India, she wanted to make sure she left Rio without a bitter taste in her mouth.

"I had ice cream two days after the final and two large strawberry smoothies. It was the first time in three months I’ve had any desert. But I had a little too much and now I have a bad throat," she said as she broke down in laughter.

Although she has been hailed by the majority of Indians as the athlete who "won the hearts of a billion people" the one social media post that sticks out in Karmakar's mind is not as complimentary.

"Someone posted a Facebook message saying 'Dipa should be ashamed of herself for wearing such a (revealing) costume in competition," Karmakar said.

"But then someone else replied: 'so did you expect Dipa to compete with a burqa on?'"

It is this kind of extreme reaction that is also weighing on her mind as she embarks on her journey home.

"I am not in any rush to get back to India because I am going back empty handed. I am kind of dreading it," she said.

"There has been a lot of sadness and pain over the last four days. If I had won a medal, then I would have been in a rush to go back (and show it to everyone).

"But on the flip side I am thinking, if I won a medal at my first Olympics, I would have lost the drive to improve even more.

"My goal is that I can take a medal back for India at the next Olympics. I will try my hardest to achieve that."