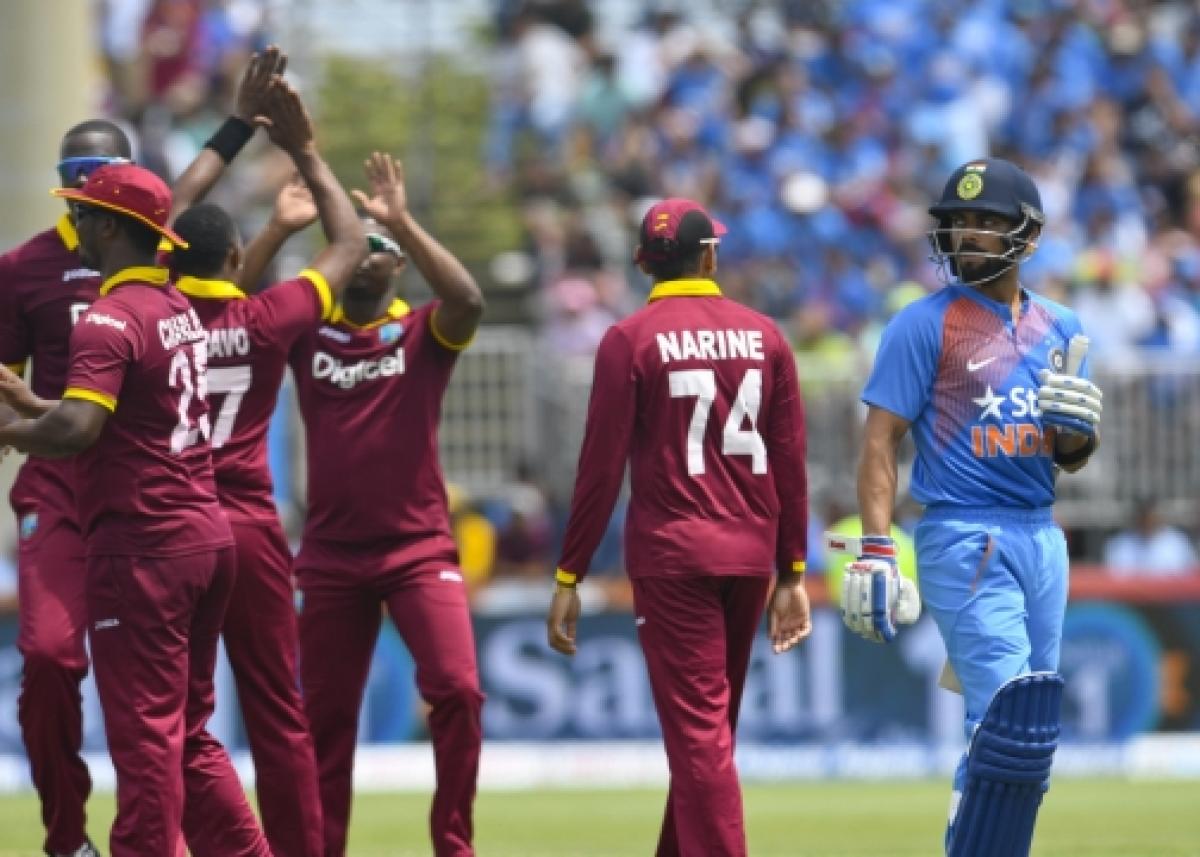 West Indies defeated India by one run in a record run-laden Twenty20 clash on Saturday after piling up the third highest ever total in the game\'s shortest format.

​Fort Lauderdale: West Indies defeated India by one run in a record run-laden Twenty20 clash on Saturday after piling up the third highest ever total in the game's shortest format.

Set 246 to win, India needed just eight off the last over and two off the final ball for a famous victory in the Florida sunshine.

But skipper Mahendra Singh Dhoni could only scoop a Dwayne Bravo delivery into the hands of Marlon Samuels at short third man to leave India agonisingly on 244-4.

Lokesh Rahul was unbeaten for India on 110 in just his fourth T20 match, hitting 12 fours and five sixes. He shared a crucial 107-run partnership with Dhoni.

West Indies' total of 245-6 was just short of Australia's 248 against England in Southampton in 2013 while Sri Lanka's 260 against Kenya at Johannesburg in 2007 remains the highest ever international T20 total.

Evin Lewis smashed an impressive 100 and Johnson Charles hit 79 as the West Indies laid the foundations to mark Carlos Brathwaite's first game as skipper with a victory.

"When Bravo said he was bowling a slower ball at the end, I told him that he had my backing. But in my mind I was thinking 'really?'," said Brathwaite.

"We never do things easy, but we held our nerve."

"The last ball, the thinking was right but the execution was wrong," said Dhoni.

The 24-year-old Lewis, whose only other appearance had ended with a duck in the shock defeat to Afghanistan at the World Twenty20 this year, feasted on perfect batting conditions at the Florida venue.

Lewis, standing in for the injured Chris Gayle, reached exactly 100 off 48 balls with five fours and nine sixes and when he was out off the fifth ball of the 16th over, world champions West Indies were 205-3.

It was the fifth fastest T20 international century. The highlight of Lewis's innings was hitting five sixes off a Stuart Binny over.

With fellow opener Charles, Lewis put on 126 for the first wicket.

The 27-year-old Charles reached his 50 off only 20 balls before he became the first man out, bowled by seamer Mohammed Shami for a lightning 79 off 33 deliveries.

Charles's innings featured six fours and seven sixes and when he fell in the 10th over, West Indies were well-placed at 126-1.

West Indies reached the halfway mark of their innings in record style -- their 132 runs beating the previous best after 10 overs of 131 set by South Africa against England at Centurion in 2009.

Ajinkya Rahane was pushed up the order to open for India as they embarked on their pursuit, but the experiment backfired when he was out, caught by Bravo in the deep, for seven off seven balls in the third over.

India's star batsman Virat Kohli was caught down the leg side by wicketkeeper Andre Fletcher off Bravo for just 16 with the total on 48.

But Rahul, dropped on 38 by Andre Russell, and Rohit Sharma put on 89 for the third wicket as India stepped on the gas.

Sharma was eventually out for 62 off 28 balls with four boundaries and four sixes with the total on 137 in the 12th over before India reached 150 in the following over.

Dhoni joined Rahul and they took the score past 200 in the 17th over before they fell just short of their target.