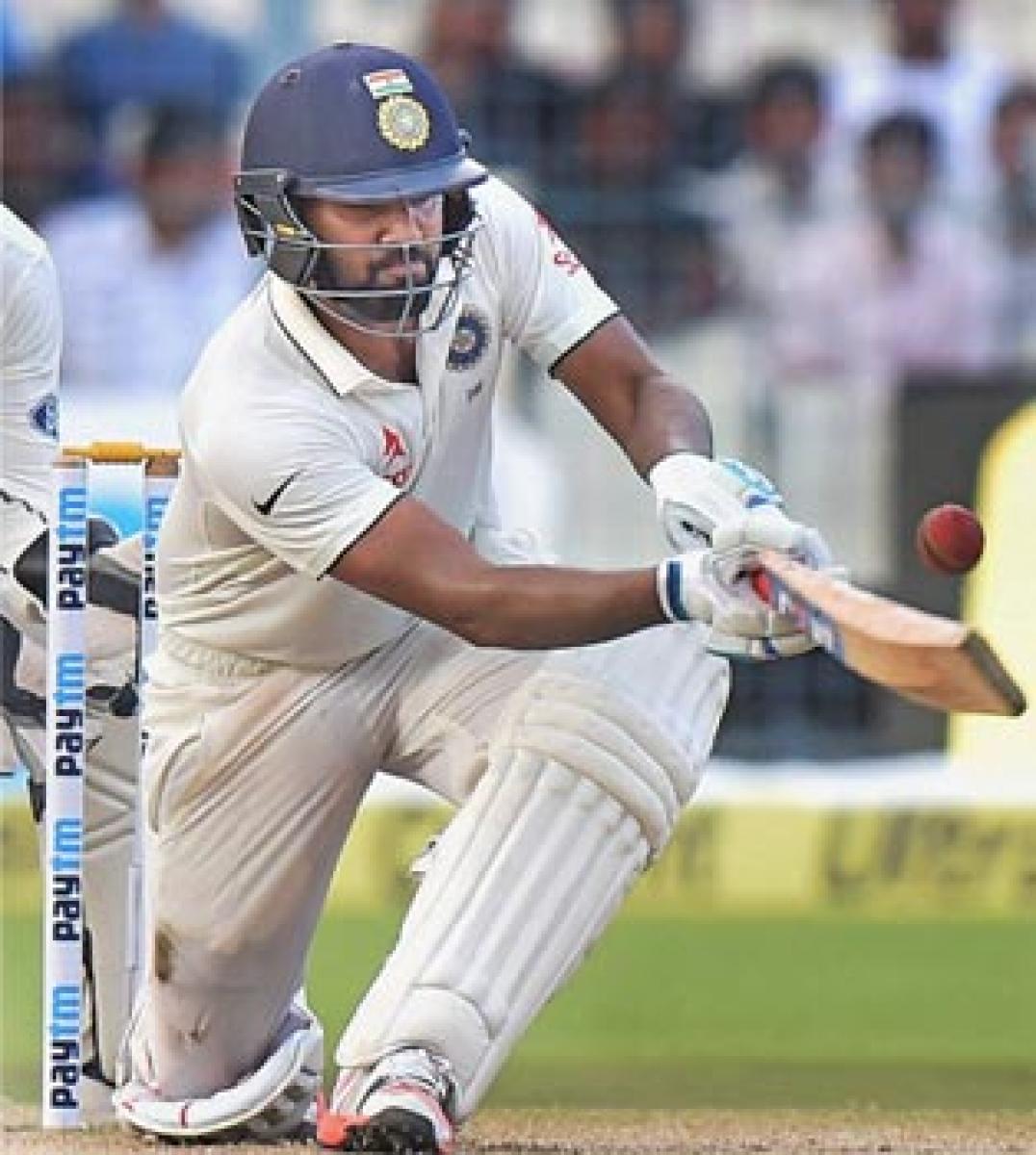 The hosts reached 227 for 8 in their second innings at stumps, opening up a comfortable 339-run gulf with their rivals. Earlier in the day, the New Zealand first innings folded at 204, conceding a 112-run lead to the hosts. India had totalled 316 in their opening essay.

Kolkata : Rohit Sharma came up with a resolute knock of 82 runs on a two-paced track as India survived a top order collapse to grab the driving seat on a riveting third day of the second cricket Test against New Zealand at the Eden Gardens here on Sunday.

The hosts reached 227 for 8 in their second innings at stumps, opening up a comfortable 339-run gulf with their rivals. Earlier in the day, the New Zealand first innings folded at 204, conceding a 112-run lead to the hosts. India had totalled 316 in their opening essay.

Rohit (82; 132 b, 9x4, 2x6), who had struck an unbeaten 68 in the first Test at Kanpur, delivered when his side needed the most, as he continued his love affair with the famed ground where he scored 177 against the West Indies in a Test and 264 in a One-Day International opposite Sri Lanka.

Mumbaikar Rohit showed exemplary grit as he earlier combined with skipper Virat Kohli (45, 65 b, 7x4) for a 48-run fifth-wicket partnership at a time India were tottering at 43 for 4 in the post-lunch session with the Kiwi pacers causing havoc, exploiting the uneven bounce on the wicket.

Kiwi quicks Trent Boult (2/28) and Matt Henry (3/44) had virtually brought their side back in contention in the match after lunch by unleashing a barrage of short-pitched offerings which caught the Indians repeatedly on the wrong foot.

In the morning, the visitors' overnight batsmen put up a gritty fight to cut India's lead to 112 runs.
Comeback man Jeetan Patel (47; 47b, 9x4) and wicketkeeper BJ Watling (25) stitched together a 60-run stand for the eighth wicket after resuming at the overnight score of 128 for 7.

Patel, who got his highest Test score, luckily survived in the day's 12th over when a straight one from Ravindra Jadeja caught him rooted to his crease and plumb in front. Patel, who had started the long walk back towards the hut, was called back by the umpire after replays showed the left-arm spinner had overstepped.

Mohammed Shami (3/46) then removed Watling and Neil Wagner, as the tourists' innings came to an end 37 minutes before lunch. Bhuvneshwar Kumar (5/48) was the most successful Indian bowler.