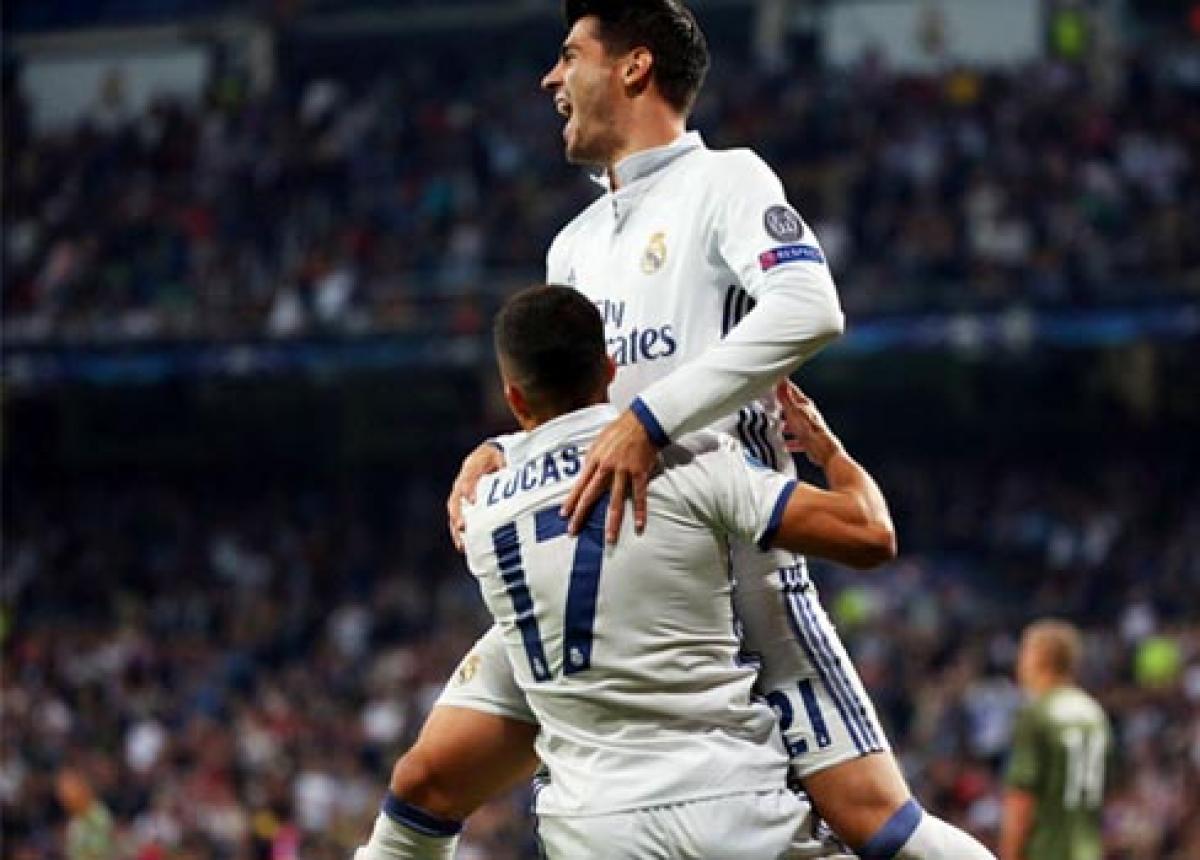 Substitute Lucas Vazquez volleyed home a cross in the 68th minute and former Juventus striker Alvaro Morata rounded off the win by converting a pass from Cristiano Ronaldo in the 84th.Real are second in Group F, level on seven points with Borussia Dortmund, and both teams will seal their place in

London: Gareth Bale scored his first European goal in almost two years as holders Real Madrid moved into a commanding position in the Champions League Group F after cruising to a 5-1 victory over Legia Warsaw on Tuesday.Bale gave the hosts the lead in the 16th minute with a curled left-foot drive and an own goal by Legia's Tomasz Jodlowiec, deflecting in Marcelo's shot, doubled their advantage.Miroslav Radovic pulled one back for the Poles from the penalty spot but Marco Asensio made it 3-1 in the 37th minute with a low shot on his Champions League debut.

Substitute Lucas Vazquez volleyed home a cross in the 68th minute and former Juventus striker Alvaro Morata rounded off the win by converting a pass from Cristiano Ronaldo in the 84th.Real are second in Group F, level on seven points with Borussia Dortmund, and both teams will seal their place in the last 16 if Zinedine Zidane's side win at Legia and the Germans beat Sporting Lisbon at home on Nov. 2.Bayer Leverkusen and Tottenham Hotspur fought out a goalless draw in their Champions League Group E match on Tuesday, with the English club having keeper Hugo Lloris to thank for keeping a clean sheet.

The visitors were in control of the first half, hitting the woodwork through Vincent Janssen, while Leverkusen were in complete command after the break, squandering half a dozen scoring opportunities.French keeper Lloris repeatedly came to Spurs' rescue in the second half, including saving a Javier Hernandez effort on the line.The result leaves Tottenham on four points, one behind AS Monaco, who drew 1-1 at CSKA Moscow. Leverkusen are third on three, having yet to win a game, with the Russians last, a point behind.

Less than two weeks after making a rare blunder with Italy, goalkeeper Gianluigi Buffon was back to his vintage best on Tuesday as Juventus snatched a 1-0 win at Olympique Lyonnais in the Champions League.Juan Cuadrado netted the only goal but Buffon was the man of the match, saving Alexandre Lacazette's 35th minute penalty before making a couple of sensational saves after the break while Juve were down to 10 men following Mario Lemina's sending off.

First-half goals by Pierre-Emerick Aubameyang and Julian Weigl set Borussia Dortmund up for a 2-1 win at Sporting on Tuesday although they had to survive a second-half rally in Champions League Group F.Bruno Cesar pulled the Portuguese league runners-up back into the game when he scored from an indirect free kick midway through the second half but Borussia held on, leaving them on seven points and Sporting with three.