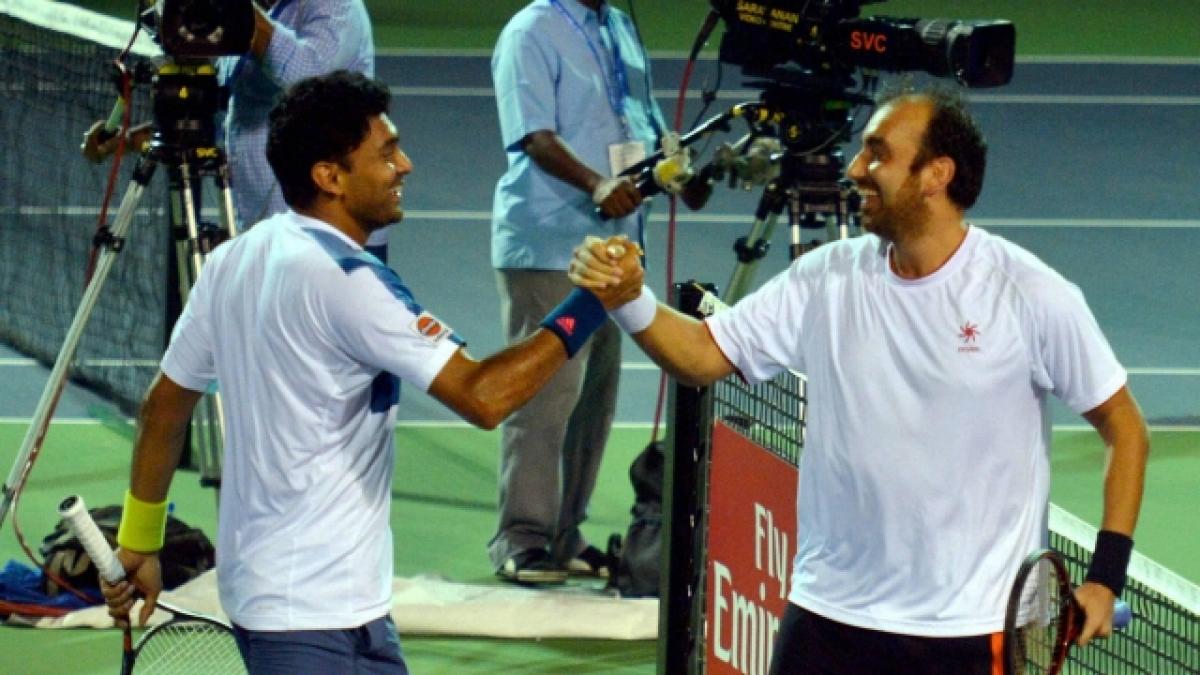 The ever-improving Divij Sharan and Purav Raja livened up the Chennai Open for home fans by storming into the doubles final as they scalped the second-seeded Argentines Guillermo Duran and Andres Molteni in the southern Indian city on Friday.

Chennai: The ever-improving Divij Sharan and Purav Raja livened up the Chennai Open for home fans by storming into the doubles final as they scalped the second-seeded Argentines Guillermo Duran and Andres Molteni in the southern Indian city on Friday.

Unseeded Sharan and Raja were in complete control of their semifinal, save two breaks they suffered in second set, in a 6-4 6-2 win in the clash lasting 63 minutes.

It will be the third ATP level final together for Sharan and Raja, having won titles in Bogota (2013) and Los Kabos (2016). Raja has played a final with Fabrice Martin in Zagreb where they ended runners-up in 2015.

When India’s challenge has already ended in the singles, and veteran star Leander Paes has also exited, the Sharan-Raja pair has kept the home fans interested in the tournament.

It can get even better if Rohan Bopanna and Jeevan Nedunchezhiyan win their semifinal on Saturday to set up an all-Indian final. They play fourth seeds Nicholas Monroe from the USA and Artem Sitak from New Zealand.
Paes was impressed with their 'I-formation' style of play and they said it was giving them excellent results.

"It really helps playing the I-formation. It keeps the players guessing which way the ball will move. It has worked for us," Sharan, who hails from Delhi, said.

Asked which pair they would prefer playing in the final, Raja said it does not matter to them much but an all-Indian final would be great.

"We don’t think about these things. We try to win each match. Playing against Rohan and Jeevan or any other players will give us the same points but yes it will be good if the two Indian teams play," Raja said.
Sharan also said that they have set themselves the target of getting into top-30 in 2017.

"It’s a great start to the season. If you are ranked better, it helps in getting good tournaments. We want to be in top-30 this year," he said.

The Indians, who will play the Australian Open main draw, outclassed their rivals in the opening set, losing only three points on their serve. Both of them were class act at the net as they played some delectable volleys that just dropped dead.

Raja did not lose a single point on his serve in the opening set even as he lost serve twice in the second. Sharan yet again stood out with his service games, losing only five points in the entire match.

They surged ahead by breaking Molteni when Sharan hit a winner between the two Argentines in the third game. In the next game when Divij served, Raja played some awe-inspiring volleys, all dropped dead with silky touch of Raja’s racquet. Sharan did the same when Raja served in the eighth.

The lead stayed with them and they took the set in the 10th game. The Indians broke Duran in the opening game of the second set but Raja was broken in the next.

The second seeds could not hold serve even once in the second set as Sharan served out the match in the eighth with Raja hitting a volley winner on the second match point.