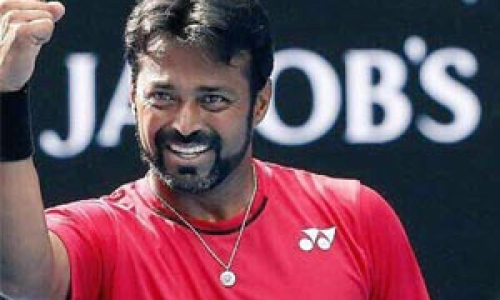 Paes, who was named a reserve in India's Davis Cup team for the Uzbekistan tie, and Shamasdin defeated Luca Margaroli (Switzerland) and Caro Zampieri (Brazil) 6-1 6-4 in the title clash at the $75,000 hard court event.

With this win, Paes clinched his 20th ATP Challenger title. Paes has now won at least one title every year for the past 26 years.

This was Paes' first final this season. He had earlier reached the semi-finals of Dubai Championships and Delray Beach Open. The last title Paes won on the ATP World Tour was in 2015 when he triumphed at Auckland with South African Raven Klaasen.

Paes' last Grand Slam in the men's doubles event came in 2013 with Radek Stepanek at the US Open while in mixed doubles, he is still a force, winning three titles with Martina Hingis in 2015 and the French Open last season.

Paes was named a reserve along with Rohan Bopanna by new non-playing captain Mahesh Bhupathi, who picked four singles players in the squad.

Bhupathi has said that he may pick either Paes or Bopanna, if required, as a doubles specialist in the tie, slated for 7-9 April in Bengaluru.