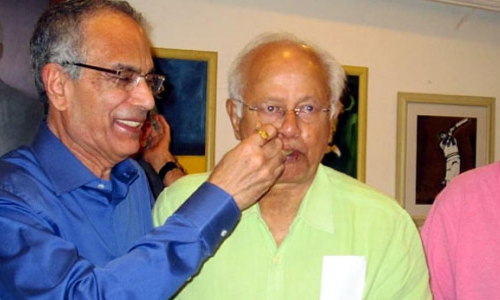 Mumbai: The 84th birthday of Indian badminton great Nandu Natekar was celebrated here last night by the Legends' Club at the Cricket Club of India during which former Asian men’s singles champion Dinesh Khanna recalled his association and on-court battles with Natekar. Khanna, who won the Asian title in 1965, the year in which Natekar retired from the shuttle game after winning his sixth national men’s singles title, said he started to imbibe excellence in backhand after seeing Natekar and another ace, Trilok Nath Seth, battle it out for the national title in 1956 in the final.

"I was impressed with the fluency, power of Natekar’s backhand and his footwork when I saw him playing as a junior against T N Seth in the 1956 Delhi Nationals. Then I decided to develop my backhand which later became an important part of my game," said the Punjab-born Khanna, who was known for his impeccable defense on the badminton court during his playing days. He also recalled how the newspapers had mentioned his loss to Natekar in one of the nationals later as "tutor versus pupil" and on another occasion when he did defeat the great player in 1963 in the finals of the Thomas Cup trials as "workman versus the artist".

Khanna said that Natekar was so versatile that he could vary his game according to his opponent’s style of play and called it "phenomenal". "Against Suresh Goel he would rally, he would keep Dipu Ghosh away from the net and against me he would draw me to the net. His game was poetry in motion. Its unfortunate that we don't have any visuals of his fluent stroke execution for posterity," said Khanna, a retired civil engineer by profession. Natekar, inducted as the first non-cricketer by the Legends Club headed by former Test batsman Madhav Apte last year, said that one of the players he feared was Khanna and recalled how he was able to avoid playing against Khanna in the 1965 nationals at the Bombay Gymkhana.

"I had already decided to call it a day after the 1965 national and did not want Dinesh to be in my half of the draw. Dinesh was one player I was always scared of because of his tight defense and his accuracy," said Natekar, the first Indian to win an international badminton title in 1956 at Selangor, Malaysia. He then recalled how in spite of being in the same half of the draw he did not meet Khanna in his tenth men’s singles final as the latter had been beaten in the semis by Dipu Ghosh.

"That result was a pleasure as Dipu had never beaten me before," said Natekar who went on to win the singles title before hanging up his racquet. A cake was cut to mark the occasion and Natekar, who described his passion for music, also regaled the gathering with his rendering of an old Talat Mehmood Hindi film song from "Tarana" which he recalled was a hit in 1951.