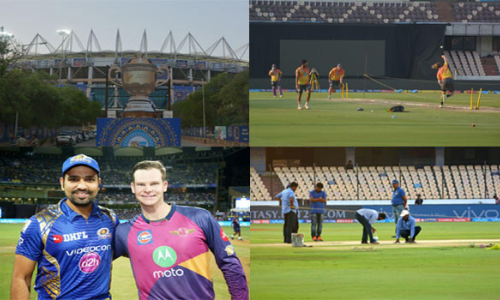 Two-time Indian Premier League (IPL) champions Mumbai Indians will be wary of the challenge posed by Rising Pune Supergiant (RPS) when the two Maharashtra cities lock horns in what promises to be a pulsating final of the 10th edition of the cash-rich cricket league at Rajiv Gandhi International Cricket Stadium (RGICS) here on Sunday.

Hyderabad: Two-time Indian Premier League (IPL) champions Mumbai Indians will be wary of the challenge posed by Rising Pune Supergiant (RPS) when the two Maharashtra cities lock horns in what promises to be a pulsating final of the 10th edition of the cash-rich cricket league at Rajiv Gandhi International Cricket Stadium (RGICS) here on Sunday.

On paper, Pune have the upper hand, considering that the Steve Smith-led side defeated Mumbai thrice in this season, including a comprehensive 20-run win in the crucial first qualifier earlier this week. Smith can take a lot of tips on absorbing the pressure in such a high-octane game from former India skipper Mahendra Singh Dhoni, who will be playing a record seventh IPL final.

But Mumbai, having reached the IPL final on three earlier occasions, can clearly take a cue from their past 2013 and 2015 performances at the Rajiv Gandhi International Stadium here on Sunday.Going into the final, Mumbai will have their tails up after their comprehensive six-wicket win against the Kolkata Knight Riders (KKR) in the second qualifier in Bengaluru on Friday.

Mumbai chased down a paltry 108 with 33 balls to spare after leg-spinner Karn Sharma (4/16) and pacer Jasprit Bumrah (3/7) decimated the strong KKR batting line-up.Skipper Rohit Sharma has the luxury of great depth in the side. When Englishman Jos Buttler left for national duty, Mumbai got the hard-hitting West Indian Lendl Simmons as the opening partner with stumper Parthiv Patel.

Nitish Rana has been one of the finds but when Ambati Rayudu came back from injury, he was equally effective.
The Pandya brothers -- Krunal and Hardik -- provide the all-round balance while West Indian Keiron Pollard has also been amongst the runs, as is Rohit of late.

Among the bowlers, veteran Australian pacer Mitchell Johnson and Karn have tormented the batsmen after replacing New Zealand's Mitchell McClenaghan and Harbhajan Singh respectively. With Sri Lankan Lasith Malinga and Bumrah in their side, Mumbai can boast of the best death bowlers in the IPL.On the other hand, Supergiant won't be getting an extension as per current rules, and will be aiming to end their association with the IPL with a silverware.

After unceremoniously removing Dhoni from captaincy, the veteran Ranchi stumper, who will most likely be seen in his Chennai Super Kings jersey in the next edition, will have another chance to silence his critics in the franchise.
In the batting department, Pune will be banking on the in-form opener Rahul Tripathi (388 runs), who is certainly the find of the season, along side the experienced Ajinkya Rahane.

Smith has also been in great touch while Manoj Tiwary has redeemed himself with some vital contributions. Along with the world's best finisher -- Dhoni, Tiwary took away the game from Mumbai's grasp, milking 41 runs from the last two overs during the first qualifier at the Wankhede Stadium.

On the bowling front, Pune weren't troubled despite losing star all-rounder Ben Stokes and veteran leg-spinner Imran Tahir due to their national commitments for the upcoming Champions Trophy. Young off-spinner Washington Sundar proved his mettle against a top class Mumbai line-up while the pace duo of Jaydev Unadkat and Shardul Thakur have come of age in the business end of the tournament.