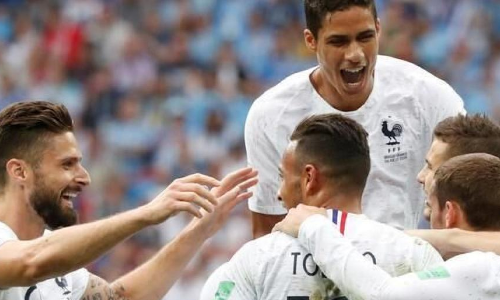 Varane (40th) glanced past goalkeeper Fernando Muslera after Griezmann floated a free-kick into the box from the right side. In the second half, Griezmann (61st) made the most of a goalkeeping howler from Muslera to double the advantage as France eased into the semi-finals where they will now take on either Brazil and Belgium.

The South American team was dealt a blow before the match when striker Edinson Cavani was left out of the side, having failed to recover from a calf injury. He was replaced in the starting eleven by Girona forward Cristhian Stuani.

France also made one enforced change to the team that beat Argentina 4-3 in the round of 16, with Bayern Munich's Corentin Tolisso replacing suspended Juventus midfielder Blaise Matuidi.

Uruguay pushed France onto the back foot early and Stuani shot across the face of goal after receiving the ball on the left.

France started to move the ball with more fluency. Striker Olivier Giroud met right-back Benjamin Pavard's cross from the right at the far post by nodding into the path of Kylian Mbappe, but the Paris Saint-Germain forward sent his looping header over the bar.

Despite dictating possession, France rarely looked like scoring as Giroud, Griezmann and Mbappe struggled to find pockets of space.