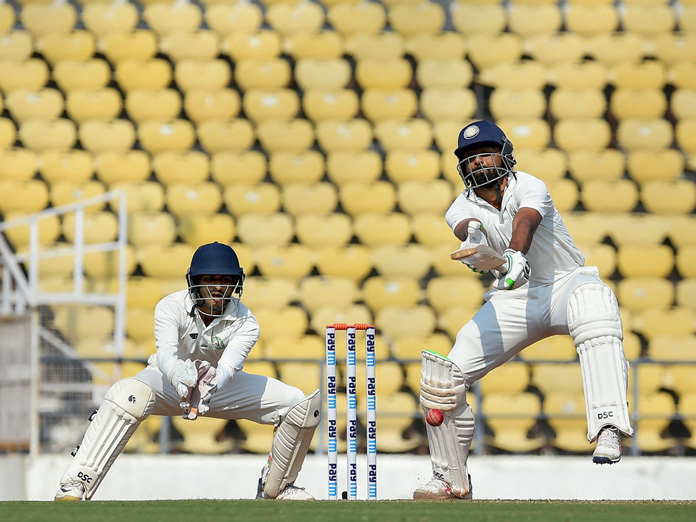 Saurashtra batsmen survived nasty body blows from Umesh Yadav during their gallant fight against Vidarbha in the Ranji Trophy final, which is now on even keel after third day

​Nagpur: Saurashtra batsmen survived nasty body blows from Umesh Yadav during their gallant fight against Vidarbha in the Ranji Trophy final, which is now on even keel after third day.

Resuming at a precarious 158 for five, Saurashtra’s lower order batsmen showed remarkable gumption and grit to take the first innings to 307, just five short of hosts' first innings total. With the first innings lead virtually nullified, Vidarbha in their second innings lost skipper Faiz Fazal (10) and R Sanjay (16) to left-arm spinner Dharmendrasinh Jadeja (2/36) before ending the day at 55 for two.

The hosts now lead by 60 runs with reliable Wasim Jaffer (5) and Ganesh Satish (24) at the crease. There are six sessions left in the match and Saurashtra, who have had a happy knack of chasing down fourth innings totals, will certainly fancy their chances.

Overnight batsman Snell Patel (102) completed his first century of the season and when India pacer Umesh Yadav sent him back after smacking one on his helmet, Saurashtra were still 128 runs away from Vidarbha's total of 312 all out.

Patel had also taken one hit on his hand as Yadav seemed unplayable with his raw pace and bounce. The chubby wicket-keeper batsman was later taken for an MRI scan, which came clear. Umesh did intimidate Saurashtra with his small yet brute intermittent spells, during which he also hit overnight batsman Prerak Mankad on his shoulder.

However, what followed after both Patel and Mankad’s dismissals was an extraordinary fightback by Saurashtra’s tail, which batted out two sessions including the extended one in the morning. The team was gasping for breath at 184 for seven but Kamlesh Makwana (27 off 61 balls) and Jadeja (23 off 32) added 38 runs for the eighth wicket stand. Jadeja found even fluent drives off Umesh and comfortably lofted spinners to add some quick runs while Makwana was going steady, rotating the strike.