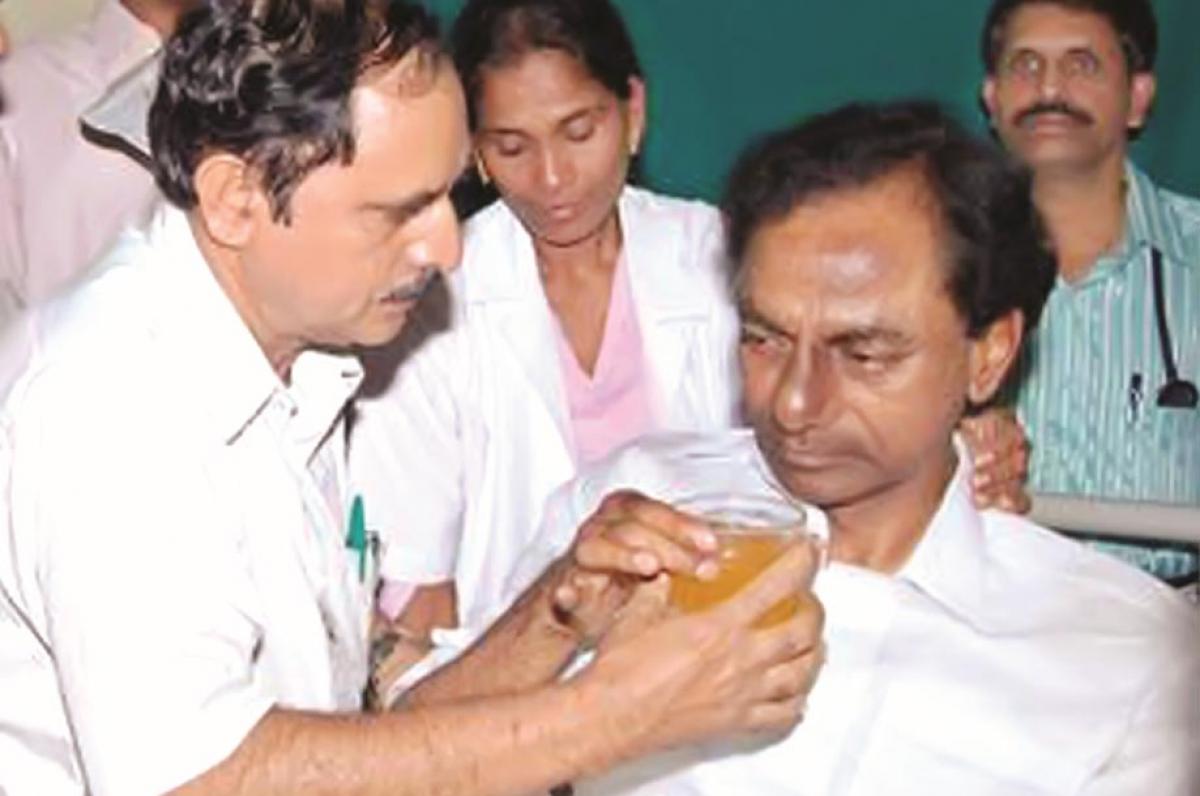 Out of nowhere, Dr Guguloth Papalal, the then Government Area Hospital superintendent who attended to TRS chief K Chandrasekhar Rao (KCR) in Khammam when the later was on fast-unto-death protest demanding separate state in 2009, has emerged as one of the top contenders for the post of first ever Mayor of the city.

Khammam: Out of nowhere, Dr Guguloth Papalal, the then Government Area Hospital superintendent who attended to TRS chief K Chandrasekhar Rao (KCR) in Khammam when the later was on fast-unto-death protest demanding separate state in 2009, has emerged as one of the top contenders for the post of first ever Mayor of the city.

The grapevine is that Dr Papalal, barely after four days he joined the ruling party with no political background at all behind him, is running for the mayor of Khammam. It was learnt that he was called in to enter the poll fray at the behest of Minister for Roads and Buildings Tummala Nageswar Rao. The speculation is also ripe that this gynaecologist doctor has the blessings of the TRS chief.

It may be mentioned here that police had arrested KCR in Karimnagar before he sat on hunger strike at Siddipet and produced before a magistrate in Khammam where he was remanded to 14-day judicial custody on November 29, 2009. Dr Papalal, who attended to KCR in the sub-jail, advised the authorities to shift him to Area Hospital.

KCR was under his treatment before he was shifted to NIMS hospital in Hyderabad. The doctor, since he was retired in 2012 as the District Coordinator Hospital Services (DCHS), has been practicing privately in the city while his wife Darjan is the Joint Director of Higher Education, Warangal region.

Dr Papalal, who is a native of Dornakal in Warangal district, has been living in Khammam for the last three decades. Since the Mayor post of Khammam was reserved for the Scheduled Tribes (ST) General, Dr Papalal appears to be the frontrunner as the ruling TRS gave him the ticket to contest as the 2nd Division (Pandurangapuram area) Corporator in the election to Khammam Municipal Corporation (KMC).

Speaking to The Hans India, Dr Papalal said: “If given an opportunity, I would work for the betterment of the city.” He also claimed that Khammam Area Hospital was chosen as the ‘Best Hospital’ in the combined state in 2006. On the other hand, the TRS functionaries reportedly wooed the only rebel candidate Akbar in the fray from the 2nd Division and cleared the path for Dr Papalal’s victory.

The rebel is expected to withdraw his nomination on Friday. Meanwhile, Rammurthy Naik contesting from 1st Division is said to be the other candidate in the race for Mayor’s post from ruling party. If Dr Papalal makes it to the Mayor’s post, he would be the second man from Warangal district who had made it to such ranks after Bonthu Rammohan, who became Mayor of Greater Hyderabad Municipal Corporation (GHMC) recently.