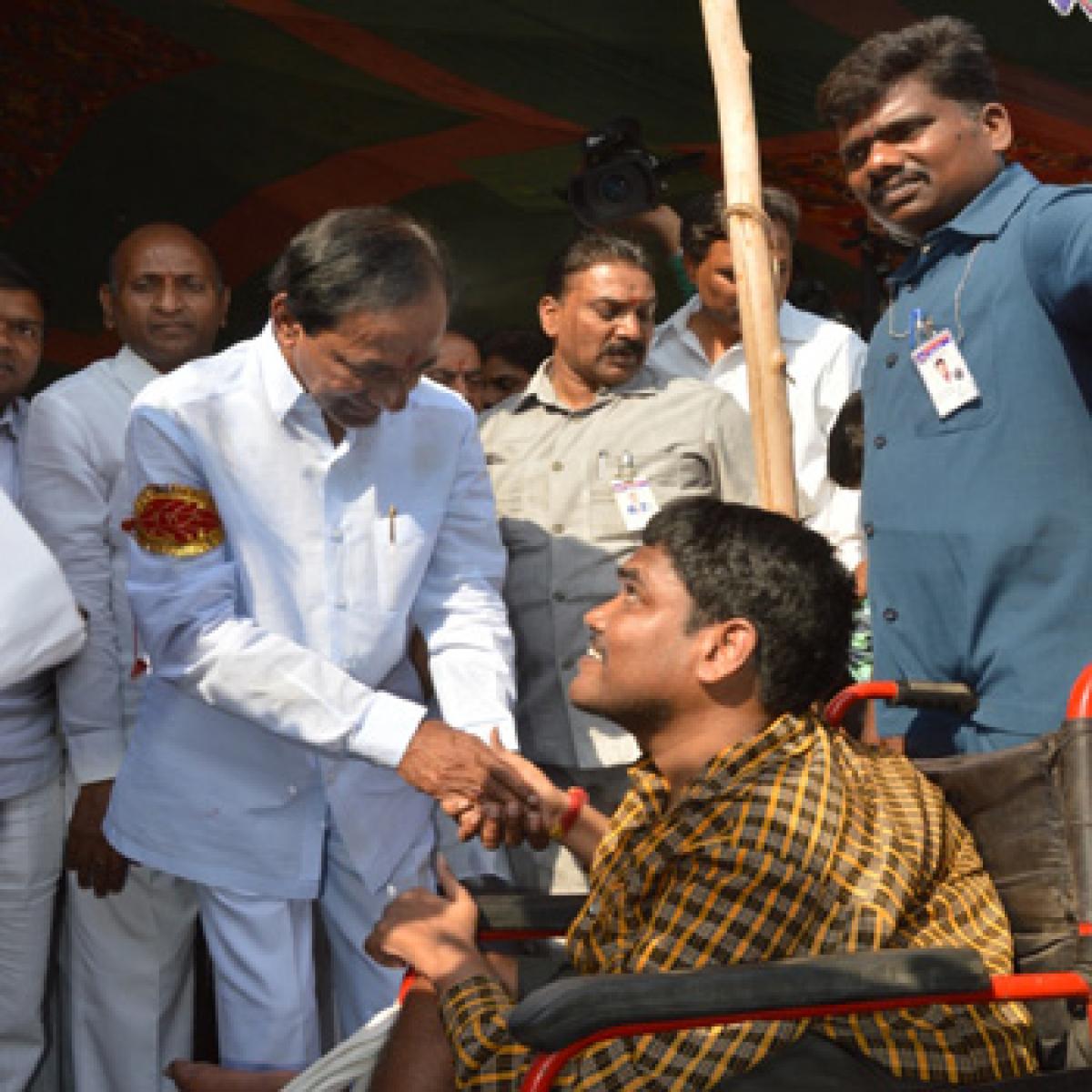 Chief Minister K Chandrasekhar Rao, who spent a busy day on Saturday on his second day of visit to Nizamabad district, hit out at the Opposition for skipping his power-point presentation in the State Assembly on irrigation projects. He took the parties to task for uttering nonsense  outside, after not attending the meet.

Nizamabad: Chief Minister K Chandrasekhar Rao, who spent a busy day on Saturday on his second day of visit to Nizamabad district, hit out at the Opposition for skipping his power-point presentation in the State Assembly on irrigation projects. He took the parties to task for uttering nonsense outside, after not attending the meet.

“These parties are not interested in public service. They can’t stomach anything good being done for the people,” KCR observed while addressing a meeting at Timmapur after having ‘darshan’ of Lord Venkateswara atop the hill, along with his wife Shoba. People in the State were blessing the Telangana Rashtra Samithi (TRS) party wherever he visited.

“As long as I have their blessings I won’t be afraid of anyone,” Rao quipped. The Chief Minister, while reiterating that the government would fulfill its promise of supplying irrigation water to one crore acres, said 24-hour three-phase power would be supplied to famers by 2018-19, by which time his life ambition of ‘Bangaru Telangana’ would be achieved. Two check dams would be built near the Manjira river, he stated while recalling that Nizamsagar at Kaleswaram was brimming with water.

Rao announced setting up of a minority school in Kotagiri and allocation of Rs 1 crore for developing Banswada. Each of 76 villages under it would be allotted Rs 15 lakh and Rs 25 be set apart for each mandal. He said Rs 100 crore would be allocated for developing Timmapur.

He said he would develop the temple on the lines of the famous Tirumala shrine, after taking suggestion from China Jeer Swami. About 390 acres around the temple, which is to be upgraded as Telangana Tirupati, would be allotted to it and Rs 10 crore spent for constructing the ‘kalyana mandapam’.

He praised Minister Pocharam Srinivas Reddy for the beautiful construction of the temple in sylvan surroundings.Rao recalled his vow of offering gold ornaments worth Rs 5 crore to the Tirumala deity if Telangana was formed. This he would fulfill shortly; already the ornaments have been made.

He announced donation of Rs 10,116 to the temple. KCR stated that following development of Yadadri temple the number of devotees visiting it has increased; now they have to wait for five to six hours for Darshan.The Chief Minister and his wife took part in ‘Sudarshana Yagam’ and ‘Purnahuthi’. Ministers A Indrakaran Reddy, Pocharam, MPs K Kavita and B B Patil, Government Adviser D Srinivas and several MLAs accompanied them.