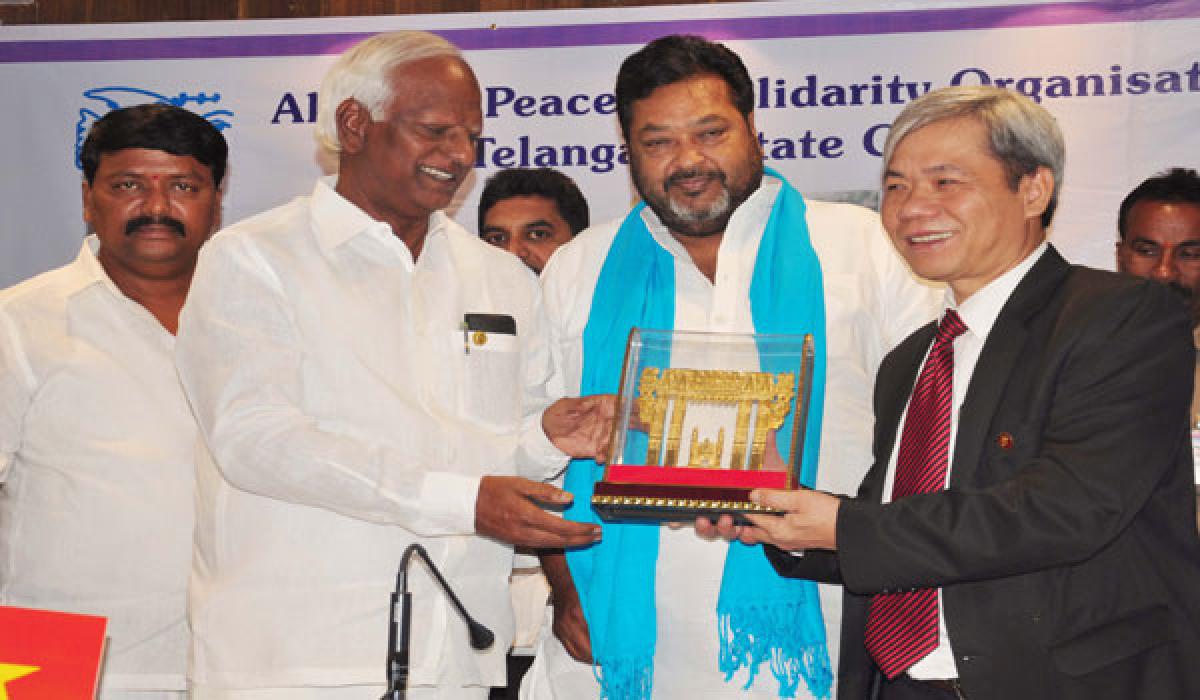 Deputy Chief Minister Kadiyam Srhari said political parties should change in accordance with the changing times and people’s aspirations. He was addressing a seminar conducted to mark 127th birth anniversary of Vietnam leader Ho Chi Minh at FTAPCI Auditorium at Red Hills organised by All India Peace and Solidarity Organisation (AIPSO) on Friday.

Srihari said Communism did not need essentially to be among the Left parties and ideology should help people resolve their problems. Unless the leaders come to their rescue, the people would not support political parties including that of the Left, he said. Opposing the Vietnam style of single party Communist rule and its success, he said Ho Chi Minh adopted violent way of guerrilla fight to achieve freedom while Mahatma Gandhi chose nonviolence for freedom. Similarly, people supported the leadership of K Chandrashekar Rao to come to power, he said.

“If people are not giving support to political parties, there must be some lacunae or lapse either in the leaders or in the ideologies. Telangana is the youngest State with three years of dispensation and it is needless to compare itself with Vietnam that is 72-years-old,” he said. The Deputy Chief Minister also said that Norway, Denmark, Sweden and other nations were also witnessing rapid growth and progress.

Getting nostalgic, he said while pursuing B Sc in the university from 1969 to 1975, some persons used to visit their hostels and take classes about Vietnam War and similar issues and added that they were probably provoking the students to get into revolutions which, he said, they could not understand properly.

Srihari said the Indians were peace lovers and would not revolt even if they did not get basic amenities and infrastructure. So, keeping their needs and changing times in view, the leaders and governments should implement schemes and programmes for providing them with basic amenities and resolve their issues, he said. Srihari said the youth should read the book on Ho Chi Minh. “I will make efforts to purchase the books by the government and make them available in all the libraries across the State,” he said. CPI(M) leader Julakanti Ranga Reddy, MLC and AIPSO national president Yadav Reddy, CPI leader and AIPSO national general secretary Dr Sudhakar and others participated.