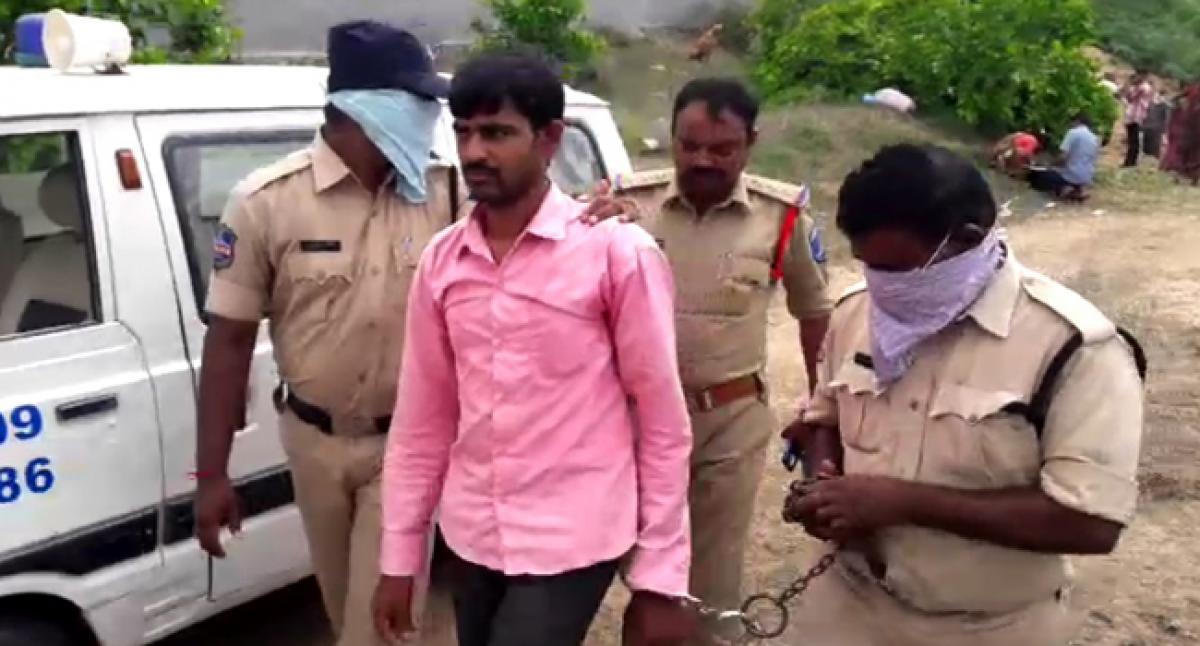 The mystery behind a ‘missing’ woman was cracked by the police when they arrested a man for allegedly killing his first wife and burying the body. After committing the  heinous crime, he feigned ignorance about the whereabouts of his ‘missing’ wife.

Mahbubnagar: The mystery behind a ‘missing’ woman was cracked by the police when they arrested a man for allegedly killing his first wife and burying the body. After committing the heinous crime, he feigned ignorance about the whereabouts of his ‘missing’ wife.

According to the police, an auto driver, Yadagiri, from Janampet village of Farookhnagar mandal killed his first wife and buried the body in a dried pond in the village of his second wife and feigned ignorance to his relatives and neighbours about the whereabouts of his wife.

However, the incident came to light only when the parents of the victim, who on growing suspicious over the behaviour of their son-in-law, lodged a complaint at the Shadnagar police station. After facing intense police enquiry, the accused Yadagiri revealed to the police that he had killed his first wife and buried her body in a pond near the village of his second wife.

Yadagiri, an auto driver and a native of Janapeta village of Farookhnagar mandal fell in love the victim Janaki and later they got married. They had two children. However, in the meanwhile, Yadagiri was also having illicit relationship with another woman and married her secretly. Yadagiri and Janaki, both were having family disputes and used to quarrel over petty issues.

Over this, Yadagiri had decided to get rid of Janaki and accordingly planned to eliminate her. As planned, Yadagir took Janaki to a toddy shop on the pretext of drinking toddy.

However, as per the plan, Yadagiri had mixed the toddy with intoxicants to make his wife unconscious and he later killed his wife by strangulating her at a secluded real-estate venture in Farookhnagar and later took her dead body in the auto rickshaw to Agraharam village in Rajapur mandal of Mahbubnagar and buried her in the village pond and later took shelter at his second wife’s house in the village.

Based on the complaint lodged by the victim’s parents, the police started investigation and questioned Yadagiri. He later confessed to his crime and surrendered to the police.

The police then arrested the culprit and took him to the place where he had buried his wife and retrieved her decomposed body and sent to post mortem. “Today we have cracked the missing case mystery and arrested the culprit Yadagiri and visited the spot where the body of the victim was buried. We have recovered the body and sent if for post mortem and have booked a murder case against the culprit,” said Ashok Kumar, Station House Officer, Shadnagar police station.