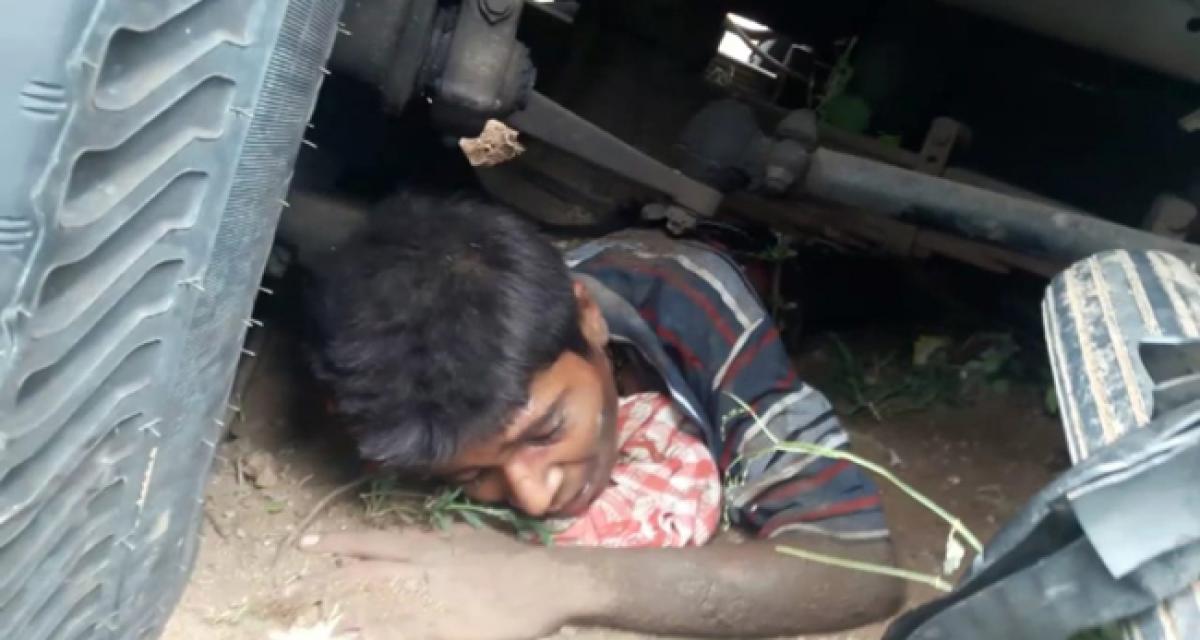 A youth, caught under the axle of a truck following a road accident at DC Thanda in Warangal Rural district, was rescued after more than two hours of anxious moments and timely response from the local police.

Warangal: A youth, caught under the axle of a truck following a road accident at DC Thanda in Warangal Rural district, was rescued after more than two hours of anxious moments and timely response from the local police.

The incident took place near Wardhannapet, when a young farmer, Angoth Venkanna (25), was going on a bike with a friend on pillion ride and fertiliser bags on the vehicles’ fuel tank.

Venkanna and his friend Santhosh, both natives of DC Thanda, were returning to DC thanda after purchasing fertiliser bags on Wednesday morning at Wardhannapet. He came across the truck going towards Khammam and laden with heavy machinery at a curve on Warangal-Khammam highway.

The truck driver in order to avoid hitting the bike steered the vehicle sideways and Venkanna, who too lost control of the motor bike, slipped beneath the axle of the truck’s engine portion. The passersby, who witnessed the incident immediately alerted the police.

Wardhannapet circle inspector Ravi Kiran, Rayaparthy sub-inspector S Sridhar and staff rushed to the spot to launch rescue operations. They called for medical assistance to help Venkanna and to ensure oxygen supply until he was pulled out as he was unable to breath, pressed by the truck weight.

Inspector Ravi Kiran said they first tried to push the truck using an excavator but it did not help and caused the youth pain. Moving the truck was out of question as it could have posed a danger to his life, he explained.

Then the police commissioned heavy duty cranes to lift the truck and pulled Venkanna out. ‘He sustained injuries on his hands, legs and back and was immediately shifted to MGM Hospital for treatment,” the Inspector informed.

A huge number of people, who gathered at the spot watched the rescue operation nervously praying for the safety of the youth battling for life, felt a great relief after he was rescued.

“What the Inspector and others did is really commendable. Inspector even wafted the youth to give him some relief. The youth is very lucky to survive,” said an eyewitness Anil Kumar. Santhosh, who suffered minor injuries after falling from the bike, was shifted to a nearby hospital.