Narayanpet soon to get district tag 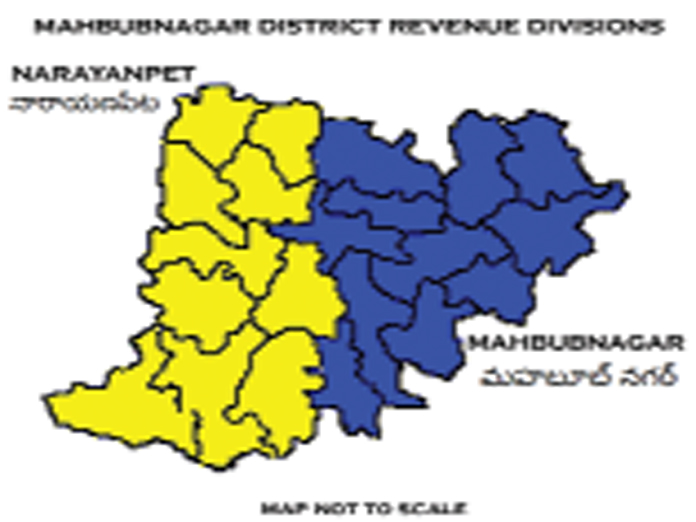 As the deadline for receiving objections from people for carving out a new Narayanpet district from the existing Mahbubnagar district came to an end on Friday, the way has been cleared for the demarcation of boundaries for the new district

Mahbubnagar: As the deadline for receiving objections from people for carving out a new Narayanpet district from the existing Mahbubnagar district came to an end on Friday, the way has been cleared for the demarcation of boundaries for the new district.

Earlier on December 31, the State government had released a Government Order Number 534 and announced carving out of Narayanpet as a new district of the existing Mahbubnagar district and in continuation with the GO, the District Collector Ronald Rose had released a notification on January 4, seeking objections, suggestions and ideas from the public to be filed on or before January 31.

However, of all the 12 mandals that come under the Narayanpet division, the people of Koilkonda and Kosgi mandals have expressed their reservation with regard to grouping them in Narayanpet district.

To this effect, the all party representatives from Kosgi and Koilkonda mandals had submitted their objections to the District Collector urging the government to keep their mandals under the existing Mahabubnagar district, instead of grouping them with the to be formed Narayanpet district.

“We have taken signature of more than 30,000 people and even staged a protest by blocking the roads and demanded the government not to include Koilkonda mandal in Narayanpet, because we are more connected with Mahbubnagar for our business and day-to-day communication and other transactions. We have already submitted a representation to the District Collector and sought his intervention,” said Balu Nayak, a local leader from Koilkonda.

Similar is the case with Kosgi mandal, which comes under Kodangal constituency. With the bifurcation of the district, this mandal will also get automatically placed under Narayanpet district. However, the local leaders from all parties including CPI, CPM, Congress, TRS and TDP have opposed it and urged the District Collector to keep the mandal under Mahbubnagar district.

“Kosgi is having better connectivity to Mahbubnagar and is within proximity of 35 kilometres, while it is more than 50 kilometres away from Narayanpet. So, grouping Kosgi with Narayanpet district will not benefit the people of Kosgi,” said Harichand, a resident of Kosgi mandal. There have also been many objections and suggestions from people of various other areas demanding carving of new mandals.

For instance, there are demands from people for formation of new mandals of Appakpally, Kotakonda, and Kollampally from Narayanpet mandal. Similarly, there are also demands of carving out of a new mandal of Kanukurthy. And from Utkoor mandal, the people are demanding Bijwar and Pulimamidi mandals. There is also demand from people of Makthal mandal to make it into a revenue division under the new district.