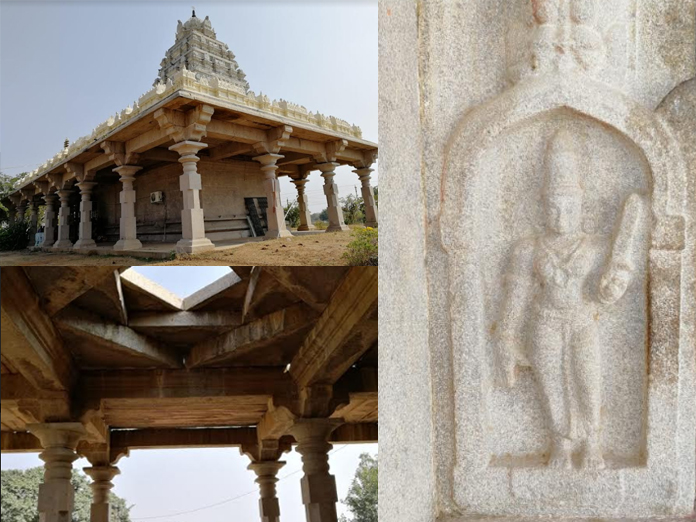 The direction given to you is to take the Warangal highway and as you reach Bibinagar, to turn left at the Capol Bone Setting centre They forgot to tell you that there are more than one of these bone setting centres and all of them called Capol

The direction given to you is to take the Warangal highway and as you reach Bibinagar, to turn left at the Capol Bone Setting centre. They forgot to tell you that there are more than one of these bone setting centres and all of them called Capol.

Anyway, the original bone setting centre is on the old Warangal road, which runs parallel to the new highway and is known as the Capol Bones Hospital and is near a bus stand and KSNR Gardens. You then get to see the board announcing the Venugopalaswamy temple as well as the temple arch, which says it is the Umamaheshwara Aalayam.

Once you take a left on this single road there are a number of new resorts coming up and so there is a lot of greenery. You cross the Pride Resorts and then a few more. This temple is 2.5 kms from the main highway. The Venugopalaswamy temple is at Mahadevpuram in Bibinagar mandal in the Yadadri Bhuvanagiri district.

As you take a turn, there is a beautiful temple and an empty ground with a stage at the end of the ground. This ancient place was also one of the temples used for the `gudi sambralu’ festival and there was a dance performance by Pramod Reddy and group on Telangana Temples. The Gudisambralu will go on till March 4.

At the entrance is a Marri chattu or a banyan tree, showing its age and solidity. Next to it is an ancient incomplete temple and on the same platform is the Venugopalaswamy temple.

The gopuram of this temple is also quite `modern’, though the temple is old. It has 24 pillar with a Sri Chakra on top of the central mandapam, and sitting below it is supposed to give strength and peace of mind to the devotee.

It has a nice open area and cool breeze blows through, with both temples being connected by a walk through. There are temple beams lying around even as there are huge gaps in the roof of the Lord Shiva and Parvathi temple.

This is the 11th year that Sriman Narayan Acharya has been working at the Venugopalaswamy temple. While he did study his theology, it was a dream which brought him to this temple. “I was an ordinary business man, dealing in buying and selling saris, when I got a dream and I walked towards this unfinished temple (even the Venugopalaswamy temple did not have a gopuram those days),” he says.

“There was no puja done for a long time at these temples and it took close to 13 years to the gopuram to be built. The sanctum sanctorum is unique in the sense that Venugopalaswamy is with Rukmani and Satyabhama,” says S S Acharya.

According to him the temple is more than 600 years old and feels that it was probably built by the Kakatiyas. He also tells a tale of Nawab Tanisha under whom worked two ministers, Akkana and Madanna.

These two would travel to Bhongir often and this place which looked like a mud heap was their resting place. Once they had a dream and started digging after that and thus the temple was discovered. Hence some people still recognise this place as the Akkana Madanna temple.

But since Acharya has taken over all the popular festivals are conducted with great pomp and vigour.

There is Lord Ganesh and Lord Subramanya temple too and a Navagraha temple. In fact though the Shiva and Parvathi temple remains incomplete, a priest Lakshmiah Shastry comes everyday and performs puja for both the idols and returns to his home at Mahadevpur. The Parvathi idol is said to be extremely powerful and a wish asked here is a wish given. Both the sanctums are darkened with the usage of oil lamp.

The sanctums of both these temples at the Shivaraman is unique in the sense of steep five steps into the sanctum with a very tall Gaddappa. This is probably to teach the human being to be humble for if you are not concentrating then you may trip, which is one of the reasons that you need to bend low for the worship at any temple. A lesson in humility.

The site of the temple, plus the looks of the temple have attracted a number of films and TV serials to be shot here. “On a clear day one could earlier see Keesara temple and the Bhongir fort but now with so much of construction it is difficult,” says S S Acharya.

In fact Shivarathri will be celebrated with great fervour between March 4th and 6th. There is an old ratham which is taken up to the road end where there is a very charming Lord Hanuman temple.

What is surprising to see is that for the Parvathi sanctum, the dwarapalikas are ladies. One does not know if this is a later innovation, but definitely is the first of its kind. Both the guardians of the Mother Goddess stand in readiness with swords in their hands.

This temple too was raided by invaders and in fact the Mother Goddess bore the brunt of it when her nose and breast were cut off. There were other damages too, but the restored work is brilliant and unless told we do not understand the damage borne by the gods.

This temple is also near a few quarries and the blasting sounds can be heard and sometimes felt, but then it is in the hands of the government to protect this landmark temple, both for its timeless history as well as the fact that this is a HariHara Kshetra.