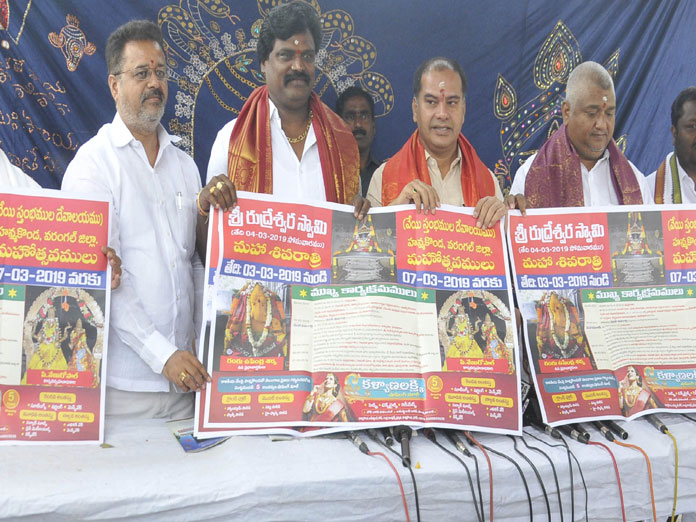 The administration of the historic 1000Pillar temple, the abode of Lord Rudreshwara, is all geared up for the fiveday Maha Shivaratri Utsavalu scheduled to commence on March 3

Hanamkonda: The administration of the historic 1000-Pillar temple, the abode of Lord Rudreshwara, is all geared up for the five-day Maha Shivaratri Utsavalu scheduled to commence on March 3.

Speaking to the media persons here on Wednesday, temple chief priest Gangu Upendra Sharma and Executive Officer P Venugopal said that special pujas would be conducted in the mornings and cultural programmes in evenings. For the first time, Srisailam temple would offer silk clothes to Rudreshwara Swamy, the presiding deity of 1000-Pillar temple.

The temple authorities decided to erect barricades and install CCTV cameras besides ensuring amenities to the devotees. A coordination committee comprising of officials from Greater Warangal Municipal Corporation, R&B, police, NPDCL, Health and other departments has been formed to ensure fool-proof arrangements for the Shivaratri festival.

Gangu Upendra Sharma said that celebrations will commence with Ganapati puja at 4.30 am on February 3. The much-awaited ‘Sri Rudreshwara Swamy Kalyanam’ will be held with ‘Maha Rudrabhishekam’ in the midnight. Events such as Chandanotsavam, Mahanyasa Rudrabhishekam, Mahabhilwarchana and purnahuti will be form part of the celebrations. Later, Warangal West MLA D Vinay Bhaskar released the Shivaratri festival poster.